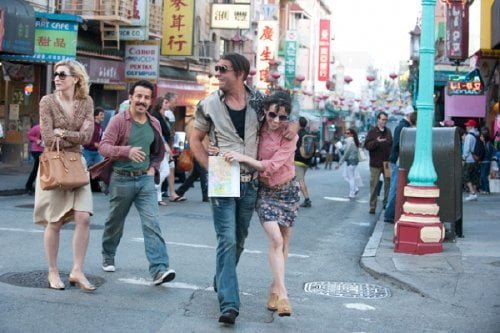 When we first meet Jasmine (Cate Blanchett, "Hanna," "The Hobbit") the first thing we notice is her self-involvement, something her overly polite airplane seatmate endures throughout a cross country journey only to make her escape at the baggage claim. This beautifully turned out woman has just had her life upended after her financier husband Hal (Alec Baldwin, "To Rome with Love") was jailed and committed suicide. Without any money or the ability to earn her own keep, Jasmine finds refuge at the home of her working class sister Ginger (Sally Hawkins, "Happy-Go-Lucky"), a woman whose own life was torpedoed when she and her then husband Augie (Andrew Dice Clay, "Dice Rules") invested a windfall with their brother-in-law. But Ginger is a compassionate soul and recognizes her adopted sibling's emotional trauma in "Blue Jasmine."

Writer/director Woody Allen has proven himself adept at gifting his actresses with Oscar gold and Cate Blanchett's shredding of her character's psyche while she outwardly maintains the entitled snobbery of the 1% is an already great actress's finest performance to date. "Blue Jasmine" isn't a perfect film, its ideas sometimes too weakly sketched, but Allen's film clearly makes its point that looking the other way is a dangerous delusion and that the rich are indeed different. As Jasmine frets at her sister's apartment door, keeping her cabbie waiting, Jasmine is picking up her boys from Augie, who doesn't understand why she'd lend a helping hand to the woman 'who stole our money.' The harried grocery worker arrives to find her 'penniless' sister complaining about her first class flight with her Louis Vuitton luggage piled high. Jasmine wastes no time dipping into Ginger's vodka, a potent mix with her prescription drugs. Allen tells his tale in parallels, the current San Francisco action neatly giving way to Jasmine's New York City past and if some of his scenes are underwritten his construction is taut. Jasmine's appraisal of her sister's walk up over a cafe is contrasted with the day Hal shows her their cavernous NYC digs. Everything that happens in the present has a prior reference, a bicoastal point/counterpoint. A day out with Ginger's mechanic boyfriend Chili (Bobby Cannavale, "Win Win") and his sweet pal Eddie (Max Casella, "Killing Them Softly") is a disaster as Jasmine recoils from the working class men and their questions about her future. She vaguely talks about plans for school, but with no way of paying for it, she eventually is forced to accept Eddie's help obtaining a position as a dental receptionist with Dr. Flicker (Michael Stuhlbarg, "A Serious Man"). Ginger's idea about interior design obviously plays right into Jasmine's self-conceptualization, but Jasmine becomes fixated on learning online because someone she knew did and this job will pay for her to 'learn computers.' Dr. Flicker is one of "Blue Jasmine's" problems as the professional clearly wants to embark on a more personal relationship and goes about it like a bull in a china shop. Allen's attempt to illustrate how Jasmine gets by with looks and breeding is drowned out, but the episode does contribute to her unraveling as she begins talking to herself on the street. Her complete ineptness around technology sets the stage for Plan B - to find an appropriate man and so she accepts an invitation to a posh party and insists Ginger accompany her. (A flashback to a NYC party illustrates Jasmine's embarrassment over her relative while Ginger makes note of a significant event Jasmine fails to see.) The third act sees the two sisters repeating past mistakes, Ginger in listening to her sister's advice, Jasmine on relying on a man. Dwight (Peter Sarsgaard, "Shattered Glass," "Orphan") spots Jasmine at that party like a man picking a mate from a catalog. He's well to do with a fabulous new home and political aspirations. Meanwhile, sound engineer Al (Louis C.K.) appears to be a step up from the loyal Chili. Both men's behavior have roots in Jasmine's ex, Hal. Blanchett's Jasmine isn't a likable person, but it is the actress's strength that enables us to feel for her dilemma, her panic and inability to deal with life's reality. She's a rare bird, as Allen establishes in her preferential treatment by her adoptive parents. As the more regular Joe, Hawkins doesn't have the opportunity for drama that her costar does, but she projects optimism shining through everyday stresses. Casting Andrew Dice Clay was inspired and he delivers as an Everyman resentful that his one stroke of luck was undone by those who took theirs for granted. He's shadowed in Danny (Alden Ehrenreich, "Beautiful Creatures"), the stepson Jasmine tried to keep on a blue-blooded path when everything collapsed - another Plan B perhaps? The film's final revelation isn't that difficult to see coming and the film's ending feels a bit unfinished, but "Blue Jasmine" is still one of Allen's best later films. It's like a counterpoint to his own "Match Point" - that film was about the luck of a lower class man amidst the British elite whereas "Blue Jasmine" is about the ability to know oneself and make one's own place in the world.

This turns out to be a uniquely handled look at the series of murderous shootings that paralyzed Washington D.C. and fascinated and horrified the rest of the country. Instead of recreating the horrible crimes, tyro feature filmmaker Alexandre Moors concentrates on the beginning of the relationship between father-figure John Allen Muhammad (Isaiah Washington) and the teen boy, Lee Boyd Malvo (Tequan Richmond), he takes under his wing. What follows is how their father-son like relationship grew into the pair becoming a killing machine. “Blue Caprice” is a slowly building film that you think is going to end in a shooting spree by John and Lee. Instead, it is a character study of a man, Muhammad, who is resentful of what life has dealt him – divorce, the loss of his three daughters to their mother’s custody, a restraining order against him and an aimless life after his hitch in the US Army. In a vain attempt to keep his girls, he kidnaps them and takes them to Antigua where he meets the abandoned-by-his-mother Lee. The boy soon becomes the son that John has never had and they move to Muhammad’s friend Ray’s place in Washington State. During the months they live with Ray (Tim Nelson) and his wife, Jamie (Joey Lauren Adams), John finds out that Lee is a natural shooter with both rifles and pistols. This sparks a germ of an idea for Muhammad – get revenge on those who, in his mind, wronged him. Isaiah Washington gives burning performance as Muhammad and the actor loses himself in his character. Washington is so powerful that his co-star Richmond is overshadowed. The young TV actor makes his co-starring debut but does not give more than a two-dimensioned performance as troubled Lee. Director Moore does a solid enough job first time off the block with the also first time scribe Ronnie Porto’s inventive, slow burn story. The film goes in directions that are bound to disappoint most viewers who will expect Hollywood-style violence and not the character study that is “Blue Caprice.”