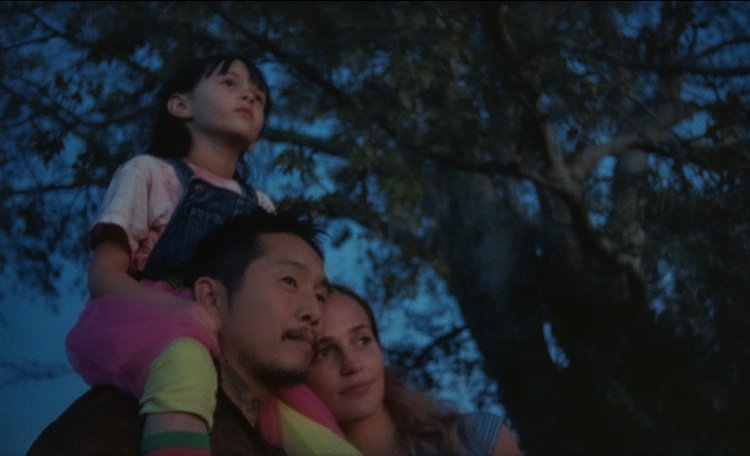 New Orleans tattoo artist Antonio LeBlanc overcame a difficult past to become a family man to his beloved wife Kathy (Alicia Vikander), now expecting their first child, and her daughter Jessie (Sydney Kowalske), but his Asian face among them always draws attention.  Unfortunately that includes from Kathy’s ex Ace’s (Mark O’Brien) partner Denny (Emory Cohen), a racist cop determined to help his buddy by denying the adopted Korean his life on the “Blue Bayou.”

Writer/director/star Justin Chon ("Gook") shines a light on an immigration dilemma even more heartbreaking than that of the Dreamers – that of children adopted by Americans who failed to follow up on their citizenship who now face deportation.  Chon’s assembled a tale rich in emotional family moments, Antonio’s relationship with Jessie reminiscent of “Stillwater’s” Bill Baker and Maya, his watery visions of his birth mother paralleled in his fledgling friendship with Vietnamese refugee Parker (Linh-Dan Pham).  The film is deeply affecting, but Chon’s indulged too many of his ideas while not fully developing Antonio’s back story.  Still, you’d have to have a heart of stone not to be moved during the film’s gut wrenching finale.

We meet Antonio trying to obtain a new job at a garage, but two felonies on his record come back to haunt him when the shop owner drags it out of him that his thefts were motorcycles.  Antonio is worried about providing for his growing family, but never at the expense of their emotional well being.  He insists his pregnant wife sleep in, offering to get Jessie dressed and to school.  He’s amused when she appears in a The Flash mask paired with a tie-dye tee and pastel tulle skirt, but questions her frown.  Jessie’s worried that the new baby, Antonio’s own, will be loved more than her.  To prove otherwise Antonio makes the snap decision to play hooky for the day.

This is utterly charming, but later will lead to an argument in a grocery store aisle when Kathy gets annoyed with Antonio’s indulgence of her daughter, an argument that just happens to be overhead by Ace and Denny in uniform.  When Antonio refuses to address Denny as ‘Sir’ and then walks away from the belligerent cop, he’s tackled, then arrested.  When Kathy, Jessie and Antonio’s disapproving mother-in-law (Geraldine Singer, "Get Out") arrive to bail him out, Kathy is shocked to learn he’s been moved – to the Immigration and Customs Enforcement facility.

Chon stacks the deck heavily against his character, maybe too heavily for a man with an ICE agent buddy, Merk (Toby Vitrano).  Desperation, especially given new financial worries, like the $5K retainer needed for an immigration lawyer (Vondie Curtis Hall), leads Antonio back to old friend Lajon (Martin Bats Bradford, "Venom") and into lies to Kathy.  Considering all he shoulders here, Chon has created a remarkable character in Antonio, his open face and loving ways making him a sensitive romantic lead, something Hollywood has been too slow to embrace for Asian actors.  We really wish nothing but happiness for this lovely man.

Kowalske is more costar than Vikander here, Jessie’s father’s desire to spend more time with her after having abandoned her the impetus for the drama.  The well cast young actress physically resembles Vikander and plays her part just right, demanding to be wooed, occasionally standoffish, delightful when playful.  Vikander is quietly romantic and maternal, distraught when her humbly idyllic life is thrown into turmoil.  And here, she sings the title song, impressing us with yet another talent.  O’Brien maintains inscrutability until the right moments while Cohen plays his villain to the hilt.

The Louisiana production traverses a variety of homes befitting its characters.  Chon’s cinematographer Ante Cheng is joined by Matthew Chuang, the duo creating impressionistic renderings of memories and a pivotal crime scene when not focusing on Spanish moss and sunsets.  Roger Suen’s score leans gently on jazz and is complemented with an understated, eclectic soundtrack.

“Blue Bayou” is a bit messy in execution, but so is the life of its lead.  Chon’s film may not be perfect, but it is heartfelt and illuminates a devastating reality.