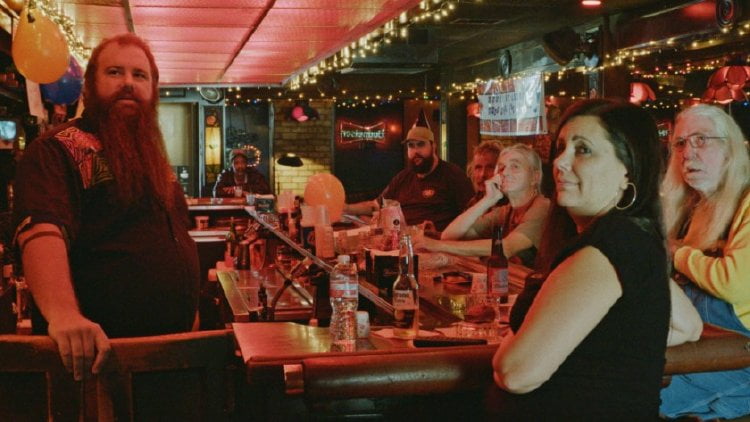 ‘The best part of waking up is bourbon in your cup,’ genial red-bearded bartender Marc tells his most regular regular Michael (Michael Martin), who’s clearly been asleep at the bar since the night before.  Michael runs to clean up and cleans up surprisingly well after a shave and a combing of his shoulder length white hair.  He’s got a mission this day to go out and buy decorations for the last day of operations for the Roaring 20s.  The community that’s formed around this Las Vegas dive will gather to say goodbye in “Bloody Nose, Empty Pockets.”

Director/cinematographers Bill (editor) and Turner Ross ("Tchoupitoulas") have a unique mode of filmmaking that some call documentary and others a hybrid.  It’s certainly not a documentary in the traditional sense, seeing as how the Roaring 20s is actually in New Orleans and that the entire cast auditioned for their roles, instead cinéma vérité.  And it is fabulous.  Spending twenty-four hours with a bunch of bar flies has never been this mesmerizing, this profound, this funny and sad.  “Bloody Nose, Empty Pockets” is an outstanding example of what can be done with a tiny budget, innovative filmmakers and a well assembled ensemble.

The Ross brothers were fascinated by the outskirts of Las Vegas which they think of as the ‘real’ part of a ‘fake city,’ but although they got their transitional shots there, they couldn’t locate the perfect bar.  They found that instead in the city where their filmmaking community, which includes “Beasts of the Southern Wild’s” Benn Zeitlin, resides.  They dressed their bar, set up scenarios (but no script) including character entrances and exits and shot for eighteen hours, Bill shaping the film during the (difficult) editing process using scenes in which the brothers’ cameras can sometimes be seen.

In a long, narrow, space with a vintage cigarette machine inside the front door, a fake blond brick wall opposite the mirror backed bar, a couple of couches tucked in an alcove and a constant stream of disco music that gradually morphs into the likes of Kenny Rogers, a disparate group of drinkers gather under the watchful eyes of bartenders that are part of this family.  We see a cake set out for the celebration with icing stating 'This Place Sucked Anyways.'  While Michael mostly sticks with his initial coffee mug (containing, we presume, more than coffee), beer seems to be the beverage of choice here.

And in addition to the man who proudly states that he didn’t become an alcoholic until *after* he became a failure (Michael is a former actor), there is Sid Haig lookalike (if Captain Spaulding sported long yellowish white hair and overalls) Lowell (Lowell Landes, "Wendy"); John the Australian, who likes to remove his pants; a soulful Black Vietnam vet you just want to hug who boogies down the bar to Michael Jackson; Pam, sporting long hair and nerdy eyeglasses who is apparently Lowell’s amour, Black drag queen Rikki and many more.  Marc takes a couple amusing phone calls, one coming from inside his bar, another demanding that Ira, the bar’s most strung out looking patron (and that’s saying something), come into work (did I hear right that he claims to be a pastry chef?).  Marc will lead the daytime crew in dissing Jeopardy and a lovely acoustic rendition of Roy Orbison’s ‘Crying,’ before departing, handing the reins over to nighttime bartender Shay (Shay Walker, "Wendy).

The scene shifts  in the evening hours, party girl Pam (‘I overslept one morning and the bottom dropped out of manufacturing’) crashing down along with a bar stool and taken home by Lowell (who returns).  Shay’s teenaged son drops in for ‘check ins,’ hanging out in the alley behind the bar smoking weed with a couple of buddies (later when everyone’s outside lighting sparklers they’ll abscond with a case of beer).  The day drinkers may have been a little more interesting, but that doesn’t mean we aren’t treated to some big moments, like Michael warning musician Pete (Peter Elwell), who’s sweet on Shay, that ‘there’s nothing more boring than a guy who used to do stuff who doesn’t do stuff no more because he’s in a bar.’  But it’s our Vietnam vet who sums things up best with his Cheers-like pronouncement that the bar is ‘a place you can come when nobody else don’t want your ass.’  As the sun comes up, we watch various departures knowing some will be OK (Lowell arrives at the Par-a-dice Motel and knocks on Pam’s door) while others may have just had the last best night of their lives.

It is the last day for The Roaring 20s dive bar, off the beaten track of the Las Vegas strip, and its patrons start to gather early. As the day progress, more and more of the regulars come in to decorate the place, drink lots of booze and bid farewell their home away from home with “Bloody Nose, Empty Pockets.”

This last-day-in-the-life of the Roaring 20’s bar, by Bill Ross IV and Turner Ross, is an odd amalgamation of true story and dramatic presentation of the closing of the iconic Vegas drinking establishment – iconic, at least, to its loyal patrons. Two of the bar’s denizens are played by actors, Mike (Michael Martin), the bar’s most loyal customer, and Shay (Shay Walker), the longtime barkeep supervising the last day. The rest all feel like the real patrons of the real bar.

Shot in a cinema verite style, the cameras are in constant motion and always in the face of the denizens as they booze, carouse, argue politics, pick fights, declare their love for each and have varying degrees of a good time. You feel the celebration the patrons feel, but also the regret of losing their home and friends of so many years.

As the long day rolls on – it starts at 10:59 AM – we get to know many of the customers, their fears and hopes. The feeling of melancholy that pervades the clients, as the celebration draws to a close, has its effect on the viewer. I felt empathy, and an element of sadness, for all the players as the doors close and they go their separate ways.