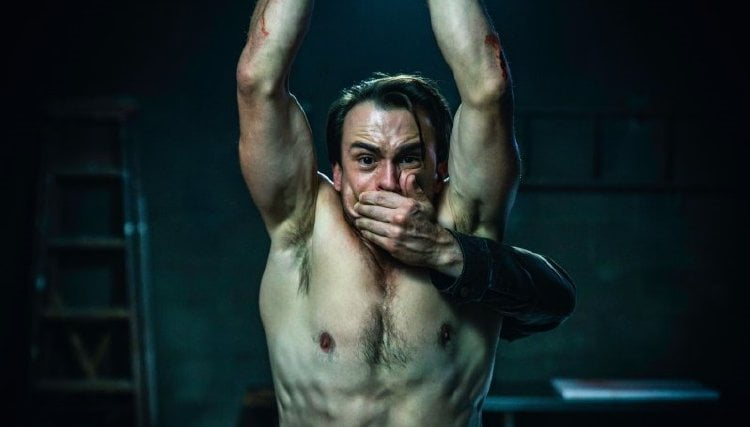 When the bank where he’s flirting with teller Maddy (Ashlee Lollback) is held up by armed men masked as animals and demons, Rex Coen (Ben O’Toole, "The Water Diviner") takes bold action, saving all but one, a death he is prosecuted and convicted for.  Released from prison after 8 years with his hometown of Boise painting him both a hero and villain, Rex decides to head for the place he literally spitballed on a map, Finland.  He may leave Boise paparazzi behind, but he gains a Finnish family of lunatics who plunge him into a “Bloody Hell.”

Director Alister Grierson ("Sanctum") and his star O’Toole have given this one their all in attempting a madcap horror comedy, but screenwriter Robert Benjamin’s failure to tie Rex's background to his new predicament makes this one a mixed bag.  O’Toole’s gleefully deranged dual performance (Rex’s conscience, a device which allows the actor dialogue when alone) and the stylish energy Grierson brings to the film are often reminiscent of Ryan Reynolds’ “Deadpool.” Alia (Meg Fraser), the sane Finn horrified by her own family (a prologue shows her trying to escape as a young girl), provides Rex both an ally and another woman to save in a continuation of his heroic persona, but it is not a strong enough connective thread to tie both parts of the film together despite the full revelation of the bank robbery events in a third act flashback.

No sooner has Rex maneuvered himself to Maddy’s window than masked robbers barge in baring weapons and barking orders.  The filmmakers’ hyper style immediately comes into play, director of photography Brad Shield ("Spider-Man 2: Homecoming") refracting light at every opportunity, editors Grierson and Benjamin cutting for comedy (watch the movement of a revolver Rex spies in a bank customer’s purse).  If his subsequent trial seems harsh, it and his imprisonment are quickly dispatched.  Eating his first meal in freedom at a diner, Rex imagines all the ways he’d like to handle the incessant photographers, bouncing ideas off himself.

Rex is shown inordinate attention again in the airport lounge, but this time it’s not just folks from Boise and it’s not until he’s in a Finnish taxi that he realizes the danger he’s in.  As the camera pans a cross section of a rural home, we see Alia reading a bedtime story to younger brother Ollie (David Hill) on the second floor, Mother (Caroline Craig) and Father (Matthew Sunderland) setting a long table for dinner on the ground level and Rex in the basement below, tied to the ceiling, the lower part of his leg missing and some kind of beast bellowing in the background.  There are also a couple of creepy blond twins (Travis Jeffery) and an Uncle (Jack Finsterer), but the first member of the family Rex meets is Ollie, who wanders down in the dead of night, and he sees the young boy as his bargaining chip.

O’Toole’s a lot of fun here, whether arguing with himself or calculating his odds in dire situations.  But there’s too much randomness in the screenplay (why, for example, if Alia’s willing to give Rex a knife does she not simply free him herself?) and the film hits some dead spots as Rex plays for time.  When that bellowing is attributed to ‘Pati,’ we hope for an intriguing family back story but never get anything outside the obvious, just as the third act accounting of the bank robbery and its aftermath add nothing that develops these characters.  Still, the film has many darkly amusing moments, composer Brian Cachia counters disturbing violins with bouncy traditional folk fare and O’Toole is memorable.   “Bloody Hell” is a classic case of style over substance, but it goes out with one last, nasty chuckle.