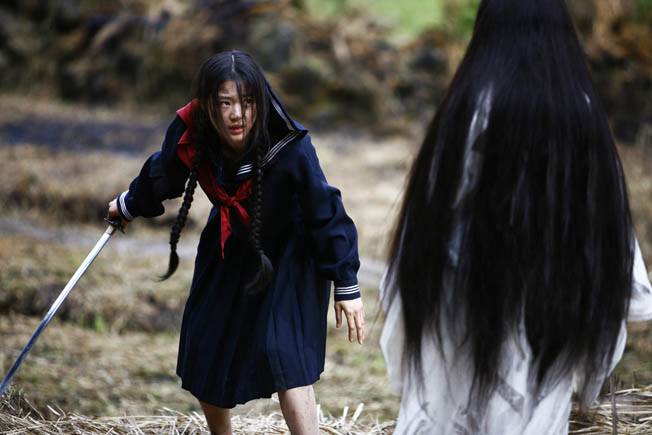 Saya (Gianna Jun) is the only vampire left on earth and she is an agent for a covert government responsible for tracking down the demons that also inhabit the Earth. These creatures are bent on destroying mankind and Saya is the last line of defense when she enrolls in a high school on an American Air Force base in Japan to hunt and destroy the demonic infiltrators in “Blood: The Last Vampire.”

I will say something for it, director Chris Nahon has created a very stylized visual image of fog and dark that helps build the moody quality that “Blood” strives for. The copious action, multiple demon beheadings and dismemberment, brutal assaults, violence and murder dominates the bulk of the story as Saya seeks the demons in their lairs. She is a one-woman army as she takes on the multitudes out to kill her and humankind and kicks their butts. Another story thread flashes back to a young Saya who learns that her human father sired a child with powerful demon numero uno, Onigen (Koyuki), and the girl vows to destroy her mother. This eventual battle royal dominates that last quarter of the film. I have to admit, I enjoyed the demon fights a lot more, especially when Saya has to protect Alice McKee (Allison Miller), the daughter of the base commanding general, from the demons and uses her as a prop, a la Jackie Chan, in kicking demon A. The story, by Chris Chow, makes the characters take a back seat to the visuals – art direction, costume, lensing, fight choreography, special effects and the rest – so there is little empathy for any but Alice. The showdown between Saya and Onegin is anticlimactic, though visually good looking. The CGI effects are OK but, during an over the rooftops chase scene between Onegin’s right hand demon, who snatched Alice, and the relentless Saya, look incredibly cheesy. “Blood: The Last Vampire,” at 91 minutes is 20 too long. It is fun fan stuff while the fighting goes on – bloody in a cartoon way but not gory. A tighter hand behind the camera would have helped.