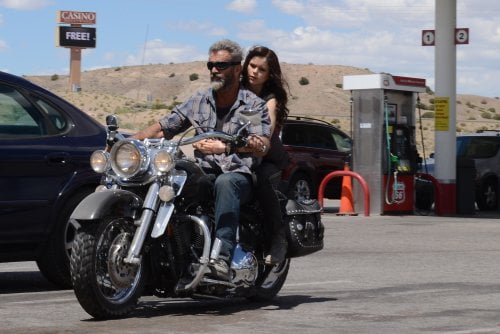 16-year old Lydia (Erin Moriarty) is in way over her head. She is with her boyfriend, Jonah (Diego Luna), when an arms deal goes wrong and Lydia accidentally shoot Jonah, then runs off thinking him dead. She turns to the only person she can – her long estranged, ex-con father John Link (Mel Gibson) and he must come up with a plan to protect his daughter from the cartel hitmen in “Blood Father.”

John Link (Mel Gibson) is an ex-con living in a broken down RV in a trailer park across the way from his AA sponsor Kirby (William H. Macy). He makes his meager living as a tattoo artist in that same RV, where a missing poster of the daughter who ran away from his thrice-remarried ex hangs on the wall. One day, he gets a surprising phone call from Lydia (Erin Moriarty, "Captain Fantastic") who's in a whole lot of trouble with a Mexican cartel and John will find redemption as a "Blood Father." This feisty little B movie directed by "Mesrine's" Jean-François Richet from a script by Peter Craig ("The Town") adapting his novel with Andrea Berloff ("Straight Outta Compton") isn't anything new, but Mel Gibson, carrying his cross of onscreen suffering, gives a powerful performance, all aging machismo leavened with witty comebacks. He's like a world wearier, less manic version of "Lethal Weapon's" Riggs here. Also strong is Moriarty, a good girl who's lost her way. The script features some overripe dialogue ('I'm like a fly about to be splattered against a windshield.'), but the performances and Richet's snappy direction raise this one up a notch. Richet begins with a crackling scene depicting Lydia's current circumstances. Her boyfriend, Jonah (Diego Luna, "Open Range"), is contending with stolen goods from a stash house, one which she has been responsible for. In order to 'prove herself,' Jonah demands Lydia shoot her terrified tenant. Instead she shoots him in the head, running from the remainder of Jonah's gang. Link is established as a former ne'er do well now on the straight and narrow with the support of Kirby. Once he gets that phone call, he goes to pick up his tearful, terrified daughter to lay low in his trailer park. He's outraged when he discovers she's still using, but they quickly get a sobering reminder of just who's she's facing when Jonah's right hand, Joker (Richard Cabral, TV's 'American Crime'), shows up with a face painted Sicario (Raoul Trujillo, "Apocalypto," "Sicario"). They barely manage to get away in Link's old beater. He then looks to ex-con Preacher (Michael Parks, "Kill Bill," "Tusk") who owes him a favor and his old hog. Preacher's in the White Supremacy business, trading Nazi paraphernalia online. Link doesn't like what he sees, but leaves armed, with Lydia on the back of his bike. But even here they're followed. When Link contacts Arturo Rios (Miguel Sandoval, "Blow," "Occulus") in prison to trace a name connected to his daughter, the news he gets back is chilling. The father/daughter dynamic under extreme pressure allows for accelerated bonding and Gibson and Moriarty convince. Support is strong, Luna a manipulative scumbag, Cabral threatening, Trujillo relentless, Parks insidious. Macy is sympathetic, a good man not powerful enough to stand up to evil forces. (Dale Dickey also appears as Preacher's girlfriend.) Richet orchestrates the several shootouts and a motorcycle chase on a twisty mountain road well, the arid, blasted terrain a type of Purgatory. His last shot, a tattoo on Link's arm, is a reminder of how far he's come. Grade:

This latest Mel Gibson action thriller is bound to be compared to Liam Neeson’s “Taken (2008),” but that comparison would be flawed. The earlier thriller has a man “with a certain set of skills” going after the bad guys who kidnap his daughter for the white slave trade and it was a bloodfest, with a body count so high I lost track. “Blood Father,” directed by Pierre Morel (who, by the way, also directed “Taken”), from a script by Luc Besson and Robert Mark Kamen, is a more old fashioned actioner with a dad trying to protect his daughter from bad guys out to get her. John Link is out of prison for a year and has been sober for two. He has not seen Lydia since before he went to prison and is shocked when she calls him for help – and getaway money. John struggles to get by as a tattoo artist but, when Lydia calls, he promises to help her in any way he can, including money he does not have. He picks her up and, figuring he is off the grid, takes her to his trailer home and tattoo parlor to hide out until things cool down. He does not count on the resources the drug cartel has at its disposal and a trio of hitmen, one notorious, is sent to find Lydia to kill her. They do and Jon and Lydia must go on the lam. Things progress as expected as the father/daughter team must take on the bad guys and save Lydia’s life, no matter what the cost to John Link. Mel Gibson is solid as the father who wants to do right by his daughter and help her make a new, unfettered life. Erin Moriarty, as Lydia, has the self-assurance of a teen – “nothing can hurt me” youthfulness – but also conveys daddy’s little girl insecurity when she has no where else to go. Supporting cast is also solid with Diego Luna as Jonah, the guy that Lydia shot when the arms deal went wrong, and who is in relentless pursuit of the girl. Others on hand are veteran thesps William H. Macy, Michael Parks and Miguel Sandoval, all lending their experience to their roles. The production utilizes the harsh New Mexico landscape as the backdrop effectively, especially during the extend motorcycle chase scenes through the desert and mountains. And, at less than 90 minutes runtime, the story moves along briskly and has little fat. This is the kind of film that will attract Mel fans, action junkies and those who are tired of superhero movies. “Blood Father” harkens back to past times.