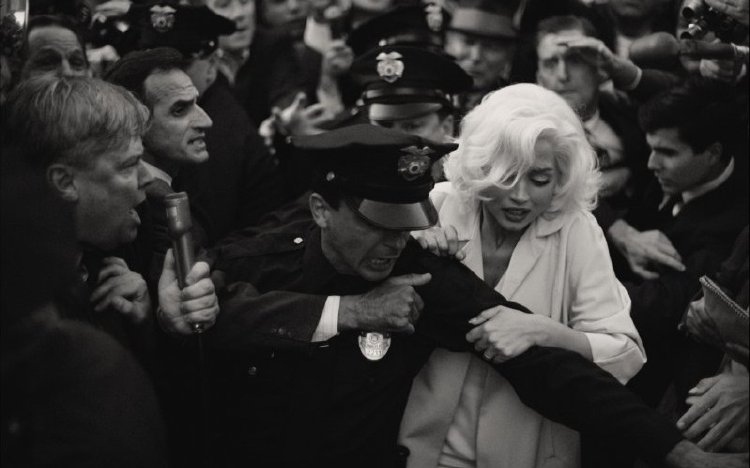 Marilyn Monroe (Ana de Armas, “Knives Out”) was one of the most iconic movie stars of all time, but as imagined in Joyce Carol Oates’s novel, Marilyn didn’t just play roles, her whole persona was one and the woman behind the famous face, Norma Jeane Baker, struggled to keep from disappearing in “Blonde.”

A lot of how you feel about writer/director Andrew Dominik’s (“The Assassination of Jesse James by the Coward Robert Ford”) film will depend on how you feel about its source material, a fictionalization which the author claimed as feminist but which debases Monroe as the ultimate sacrificial lamb of celebrity and Hollywood culture.  De Armas, with assists from makeup artist Tina Roesler Kerwin and hair stylist Jaime Leigh McIntosh, slips into Monroe’s skin so seamlessly you’ll forget you are watching the Cuban actress, but she is afforded little room to explore more than dazed anxiety and public ‘Marilyn.’

The film begins with Norma Jeane’s mother Gladys (a scarily unhinged Julianne Nicholson) giving her (Lily Fisher) a ‘surprise’ for her birthday – a framed photographer of her father which elicits questions that provoke angry retorts and violence.  When fire breaks out in L.A., Gladys drags Norma out to drive through a harrowing hellscape only to be turned around by a cop who tells the drunk woman to go home.  There Gladys, naked and raving, starts her own fire and young Norma runs to the neighbors for help.  With her mother committed to Norwood State, Norma ends up in an orphanage.   She will continue to search for her father her whole life and her inability to have a child, whether through studio-mandated abortion or miscarriage, will be what this film theorizes drives her over the edge, despite continual male betrayals.

On her first audition, Marilyn is shoved to the floor by ‘Mr. Z’ (David Warshofsky, "Now You See Me") and summarily raped, only to learn she ‘got the part,’ her walk on in “All About Eve” (notably produced by Darryl F. Zanuck and startlingly recreated, as all Monroe’s film scenes are).  She’s mocked giving a frighteningly good audition for “Don’t Bother to Knock,” her acting trumped by her ass as she leaves the soundstage.  Supporting herself as a model and taking acting classes, she meets Charlie Chaplin’s son, Cass (Xavier Samuel, "Love & Friendship"), who opens her up to a three-way with his lover Eddy G. Robinson, Jr. (Evan Williams, “Escape Room”).  The three become inseparable, but she’s warned off seeing them by an agent controlling the rumor mill (note that while Marilyn reportedly had an affair with Chaplin, Jr., he and Robinson were never lovers nor were they a throuple).

The Ex-Athlete (Bobby Canavale) wants to protect her, until he’s faced with her past nudes and what he feels is her wanton display shooting the subway grate scene of “The Seven-Year Itch.”  She’s noted with condescension by The Playwright (Adrien Brody) during a NYC reading, only to be shocked by her insight into Magda, the character he’s written based on a lost love.  This is perhaps the film’s best scene, De Armas getting to portray Marilyn’s intellect, then glow in the face of an appreciative audience.  The Miller-Monroe marriage is portrayed as close to bliss, even after Marilyn finds her words in his typewriter, but a miscarriage escalates self-medication at an alarming rate (and brings us into David Lynch territory with a talking fetus only the “Eraserhead” director might have pulled off).

Director of photography Chayse Irvin ("BlacKkKlansman"), who uses Spike Lee's double dolly shot to emphasize DiMaggio’s fury, mostly employs an Academy ratio shooting interchangeably in color (most ‘personal’ scenes) and black and white (most studio scenes) but rigorously adhering to sources when they are recreated.  A b&w depiction of men, their mouths gaping as they ogle the star, is like a warped Weegee.  Irvin and Dominik surreally stretch out their image for Norma’s three-way scene, an artful suggestion of sex, but if you are wondering just what garnered the film’s NC-17 rating, a Netflix first, it is the scene with The President (Caspar Phillipson, "Jackie's" JFK).  Delivered to a NYC suite with a return ticket to L.A. already thrust upon her, Marilyn is repeated told ‘not to be shy’ by a President lying on a bed on the phone, before he simply shoves her head where he wants it and Dominik fantasizes her in close-up on a porn theater movie screen.

Production designer Florencia Martin ("Licorice Pizza") scouted and used some of Monroe's actual homes, including her childhood apartment and the home she died in.  Everything has been immaculately recreated, costume designer Jennifer Johnson depicting the relaxed Marilyn as well as the famously attired one just as we remember her.  The sparingly used score is composed and performed by Dominik’s recent documentary subject Nick Cave and Warren Ellis.

In the end, we can see Marilyn relax with one man, her makeup artist Whitey (Toby Huss, "The Rental," "Copshop"), but news of the death of another is accompanied with the delivery of a memento of childhood and a rug-pulling betrayal.   “Blonde” can be a brutal watch.