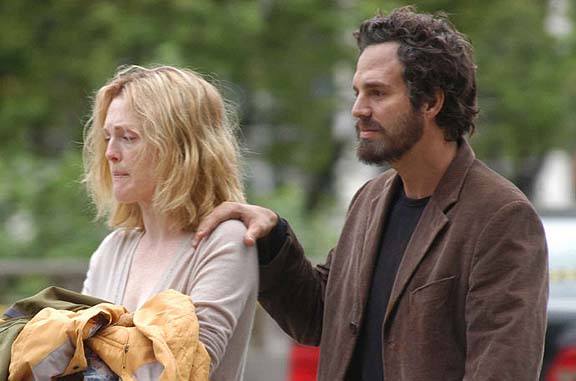 It is a normal day in the big city until one man, driving his car, suddenly goes blind. The doctors cannot find a problem and call for more tests. Then, another person succumbs to the whiteness, then another, then another until the government declares an epidemic and forces the quarantine of anyone infected. However, one of the inmates (Julianne Moore), the wife of one of the victims (Mark Ruffalo), has not lost her sight and she pretends to suffer from the "Blindness."

Fernando Meirelles' tautly directed film depicting the literal collapse of civilization is a harrowing reflection looking into the mirror of current times. Brilliant production design compliments the film with its 'warning' flashes of white (a coat, headlights) in the hours before catastrophy strikes and a quick descent into hell once it does in this allegory of a people felled by ignorance and greed saved by sacrifice and a leader with vision.

Director Fernando Meirelles and scripter Don McKellar, adapting Jose Saramago's novel, tells a modern parable about the disintegration of society. As the 'white sickness' claims more and more victims, the quarantine wards in an old asylum begin to fill up. Those with sight on the outside are fast abandoning the care of the victims, leaving the blind to fend for themselves. Man being man, the inmates are divided between the compassionate and the power hungry greedy. The story, although a little to long for the material, is a first-rate thriller that builds slowly as sightlessness strikes the first victim and he seeks help. Things accelerate as the next victims are hit by the sickness and the seeds of panic are sown as their numbers rapidly increase. The fear of the sighted falling prey to the blinding infection forces the government to uphold the strict isolation policy ­ with deadly force if necessaary. And it becomes necessary. The chaos and breakdown in society within the blind victims' prison culminates in a battle between good and bad that ends in a devastating fire. The calamity frees Moore and the small group first joined by their disease into the world once again. What they find is a repeat of the chaos and breakdown they saw within their prison but at a far bigger scale. Meirelles and company have created a stylish, scary chronicle of the disintegration of society that is an allegory of the AIDS crisis ­ a diseease descends upon us and it cannot be stopped. Throw in blindness as the epidemic and the affliction causes widespread panic. Or, is it the panic that causes the spreading blindness? The overwhelming despair of the plight is palpable, as is the tiny glimmer of hope in the end. The huge cast is led with convincing nuance by Julianne Moore as the Doctor's Wife and only one with sight. Her initial desire is to help her husband but circumstance places awesome responsibility and she must care for many. Moore shows the physical and psychological strain that steadily builds as things go spiraling down. Mark Ruffalo as the Doctor, Alice Braga as the Woman with the Dark Glasses, Danny Glover as the Man with the Black Eye Patch, Don McKellar as the Thief, Yusuke Iseya as the First Blind Man and Gael Garcia as the tyrannical King of Ward Three lead the unsighted multitudes, giving individuality and dimension to their characters. Techs are top notch. Cesar Charlones stylized lensing uses blinding flashes of white to convey the rapid spread of the disease. Soft, out of focus camera work visibly shows the affliction with affective fright. Editing (Daniel Rezende), production design (Deirdre Bowen and Susie Figgis), original music (Marco Antonio Guimaraes), art direction (Joshua de Cartier) and the rest of the capable crew do a fine job is showing man's descent into hell. A bit of judicial tightening was needed, is my only complaint. "Blindness" is a thriller, horror yarn and character study that brings to my mind "The Lord of the Flies" with its feel of a societal shipwreck that divides the world into its most primitive elements of good against evil.