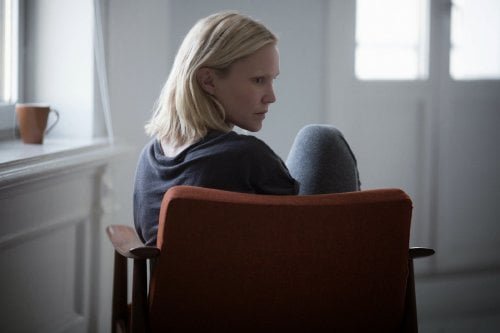 Young married woman Ingrid (Ellen Dorrit Pettersen) has been resisting her husband Morten's (Henrik Rafaelsen, "Happy, Happy") urgings to leave their apartment. Instead she spends her days by a sunny window writing tales of porn-obsessed Einar (Marius Kolbenstvedt) and single mother Elin (Vera Vitali), whose story begins to resemble her own. When she's not trying to make visual reconstructions in her head, she often thinks Morten is watching her, but cannot know for sure because she is "Blind."

Joachim Trier's ("Oslo, August 31st") cowriter Eskil Vogt makes his directorial debut with a story that calls back to the structure of "Reprise" as if crossed with Jeremy Podeswa's "The Five Senses." Yet this richly imaginative tale of a woman whose fresh handicap has sparked feelings of jealousy is better than either of those films, Vogt keeping us off balance as Ingrid's fantasy blends and merges with reality. The film begins in total darkness which gradually gives way to the faint outline of an oak tree. Ingrid is practicing visualization, something she has been told she will lose over time. Smaller things are easier, she tells us, than big things like this tree, but places are the hardest, even when she's known them well. After she pulls out her laptop, she tells us about Einar and we begin to follow his story. Ingrid touches what she cannot see and Einar watches what he cannot touch. We suddenly meet Elin from Oslo, who, since getting divorced, finds herself alone except for her young daughter. Then there is Morten who, we're told, likes to think of himself as being there for others, as he is for Einar when he runs into him after a movie. The two share coffee and catch up, Morten telling Einar he's married. 'That crazy girl who flashed her tits?' asks Einar. One and the same. Then Morten returns home to his wife Ingrid. At first, "Blind" is as disorienting as its protagonist's lack of sight, seemingly disparate stories following three different characters, but Vogt spins them together, overlapping storylines in mysterious, cosmic and provocative ways. The more Einar, Elin and Morten come into focus, the more Ingrid seems to lose her grip in reality, her storyline merging with Elin's, who is suddenly losing her sight. One of his best observations has to do with Einar's 'last happy day,' a day of national tragedy on which strangers noticed him and made connections. One wonders if Vogt cast the actress to match the lighting design (cinematography by Thimios Bakatakis ("Dogtooth," "The Lobster") or if the lighting was designed for her, as so many different aspects of her personality are cast in light or in shadow. With her pale skin, hair, eyebrows and lashes, Dorrit Pettersen appears almost alien in her full writing light, a god constructing her own universe. The actress, with her precise movements, is fully convincing as a blind person. Icarus Films' KimStim Collection has issued the film on DVD only. It includes an interview with Vogt, in which he discusses the limitations of shooting from a blind person's perspective (no point of view shots) and the alienating effects of online porn. Grade: