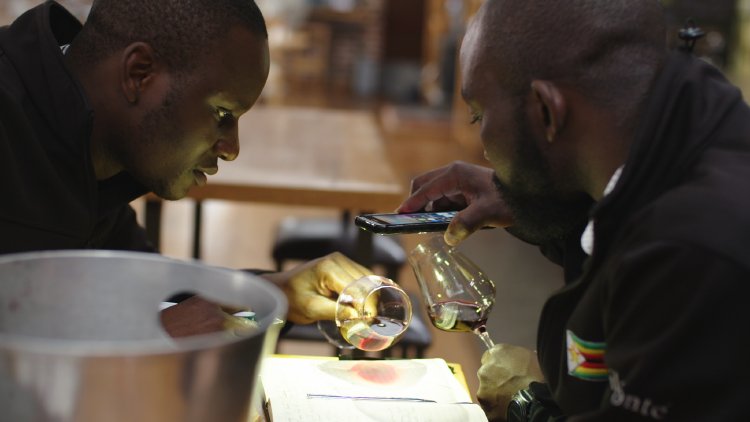 Four Zimbabwean men, two single, two married with children, face all manner of hardships immigrating to Cape Town in South Africa, a country which does not receive them warmly.  They meet one another through the oddest of circumstances, all having become sommeliers in their adopted country after having no exposure to wine back home.  Joseph, Marlvin, Tenashe and Pardon all get swept up in the exceedingly difficult ‘sport’ of identifying a wine’s varietal, region, year and even producer via blind taste testing and form the first Zimbabwean team to compete in France in “Blind Ambition.”

Directors Robert Coe and Warwick Ross don’t break any new ground with the documentary format, but their subject, which touches on issues of class and race but focuses on its more feel good aspects, is a classic underdog tale.

After a wine journalist compares the idea of a Zimbabwean wine tasting team to Egypt putting together an Olympic skiing team (one would more popularly remember the Jamaican bobsleighers), we’re introduced to the Chateau de Gilly in Burgundy, where the competition takes place, and South African team coach Jean Vincent Rindon, who gives us some background and is the man who supports the four immigrants before encouraging the Zimbabweans to form their own team.

The filmmakers then go into template mode, giving an Olympics style bio of each of the four, all beginning with an establishing shot of Cape Town and ending with a fade to black.  Joseph worked for an important restaurateur who offered the man a job as a waiter after a glass of champagne for his birthday piqued his taste buds.  He dreams of farming back in his home country.  The deeply religious Marlvin explains that his Pentecostal faith forbids alcohol, but counters that with the story of Jesus turning water into wine.  His wife will join him in a glass to support his career.  Pardon is the athletic singleton, a soccer player introduced to wine by Joseph.  Tenashe has worked his way up at Test Kitchen, which he says is South Africa’s most acclaimed restaurant.  Coe and Ross then segue into Zimbabwe’s 2008 economic crisis which drove many out of the country and the hostility and crime they faced vying for a better life elsewhere.  Reverend Verryn championed these refugees and notes that ‘some of the most incredible minds don’t fit where we think they belong.’

The final act is, of course, about the obstacles the team faces competing.  Their disadvantages are numerous from the obvious cultural catch-up to the economies of access to the products to things one might not think of, like familiarity with European fruits and berries.  They are surprised by how successful their crowd sourcing for their entry fee, travel and expenses is, gifts pouring in from around the world.  But Rindon cannot coach two teams and the man they engage, Denis Garret, once one of the world’s highest ranked tasters, turns out not to be the fanciful eccentric first presented, but a problematic fame chaser who blunts the team’s chances.

“Blind Ambition” charts true underdogs taking on a rarefied world in an educational and entertaining documentary.  Surprisingly, it reaches its peak as it winds down, illustrating the evolving paths each of these four men took post-competition.

Everyone likes an underdog story and writers-producers-directors Robert Coe and Warwick Ross take us into the depths of the world wine tasting competition. And, we see it through the eyes of the novice, four-member Team Zimbabwe as they head to France to compete at the highest level in “Blind Ambition.”

Coe and Warwick come up with a conventional, no frills documentary about the four members of Team Zimbabwe – Joseph, Tinashe, Pardon and Marlvin. As the story and their progress in realizing their dreams unfold, we get a capsule biography of each man and their ambitions to win the prestigious blind tasting contest and further their culinary careers in wine.

Their journey takes them from their arduous migration from Zimbabwe (one in a sealed shipping container) to an unwelcoming South Africa and the beginnings of their hoped-for careers as sommeliers, wine-producers and restaurateurs. We get to know a little about them and their ambitions and every one you root for.

The meat of “Blind Ambition,” of course, is the competition held in Burgundy, France. We travel with Team Z as they tour around Europe tasting wines and preparing for the big event – taste 12 wines (6 red, 6 white), without seeing the bottles or labels and identify such things as type of grape, country of origin, region, producer and vintage. And, the wines can be from anywhere in the world. It is a pretty tough and painstaking competition.

There is nothing special about the construction and flow of “Blind Ambition,” but its rags to possible riches story is a good underdog tale.

Samuel Goldwyn releases "Blind Ambition" in select theaters and on VOD on 9/2/22.