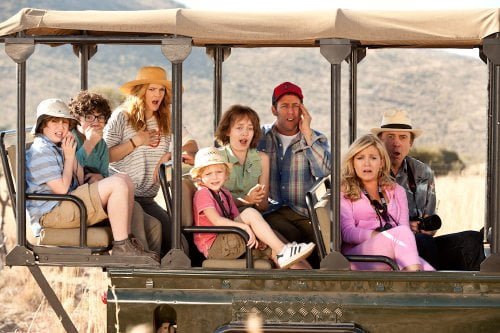 Single parents Lauren (Drew Barrymore) and Jim (Adam Sandler) don't need a second date to convince themselves they never want to see each other again. So they're horrified to find they've both taken advantage of the canceled African 'familymoon' vacation of their respective partner and boss and must endure an entire week of having their families "Blended."

Sandler comedies are always an iffy proposition, but this one had two things going for it - he's paired with Drew Barrymore ("The Wedding Singer," "50 First Dates") and it's directed by Frank Coraci ("The Wedding Singer," "The Waterboy") not Dennis Dugan of the execrable "Grown Ups" films. But while television Writers Ivan Menchell and Clare Sera have come up with a concept that shifts this one away from Sandler's other vacation movie ("Just Go With It"), their set up, which takes a considerable amount of screen time, is horrible and their 'jokes' puerile. Coraci appears to have picked up Dugan's sloppy habits, too, as continuity errors run amok. That said, Sandler and Barrymore once again prove a winning combination and Sandler's innate sweetness shines in parenting scenes. Lauren, on her first date since college, is incensed that Jim's taken her to Hooters where he knows all the waitresses by name. Barrymore should have been even more outraged that she's required to spend the scene spitting food all over the table and herself. She's also the coowner of Closet Queens (yes, they go there) and spends her days dishing with partner Jen (Wendi McLendon-Covey, TV's 'The Goldbergs') as they organize rich people's clothing. Jen's thrilled to be going on a luxe vacation with her new squeeze, but then she freaks when she finds out he has kids - five of them. With the trip paid for and her ex having bailed on a school vacation trip for her boys, Lauren gets an idea. Because these films rely on lots of coincidence (but not such logic as the fact that folks traveling from the same place to the same place will ever meet until they get there), Jen's boyfriend is none other than Jim's boss and so he gets the same idea. Lauren has two boys, Brendan (Braxton Beckham), an out of control horndog, and Tyler (Kyle Red Silverstein, TV's 'Grey's Anatomy'), the worst kid on his baseball team. Jim has three girls, tomboy Hilary (Bella Thorne), Espn (Emma Fuhrmann, "The Magic of Belle Isle"), who talks to her deceased mom and the adorable little Lou (Alyvia Alyn Lind, "Dark Skies"). There's exactly one decent scene before this perfect matchup for the prebooked trip gets to Sun City Resort's Palace of the Lost City (depressingly, a real place that looks as artificial as a Rainforest Cafe), and it has to do with Lauren and Jim's parental discomfort purchasing items for their opposite sexed kids at a local pharmacy. This will set the stage for Jim to teach Tyler how to hit a baseball and Lauren to get girlie with Hilary (Jim's three daughters all go to his barber). Resort host Mfana (Abdoulaye NGom, "That's My Boy") treats the couple as the lovers he believes them to be. The film's full of the usual Sandler crotch hits, granny throwing and head bonks, along with his assorted hangers on. Kevin Nealon ("Just Go With It") is Eddy, a guy taking new wife Ginger (Jessica Lowe) and son Jake (Zak Henri, TV's 'Bunheads,' a love interest for Hilary) to 'blend' by sucking face at the group dinner table. Hotel entertainer Nickens (Terry Crews, TV's 'Brooklyn Nine-Nine') fronts an odd Greek chorus and exhibits spectacular pec control. Alexis Arquette ("The Wedding Singer") shows up in one scene for no reason. 'Community's Joel McHale is Lauren's transparent ex. Shaquille O'Neal is Jim's Dick's Sporting Goods coworker Doug. "Blended" looked abysmal, but has enough heart to make it tolerable. Someday maybe Sandler will aim higher than that.