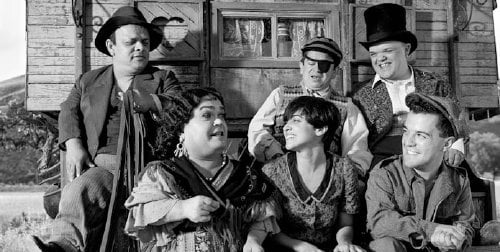 The Brothers Grimm brought to modern literature a collection of classical legends and stories dating back to the Middle Ages. The favorite of these fantasy tales is the oft-told Snow White and the Seven Dwarfs (the best known and liked is Walt Disney’s 1937 animation classic). Spanish-born director Pablo Berger turns this fairy tale on its ear as the story transits to the bullfighting arena as the setting for “Blancanieves.”

As if things are not horrific enough the day famed matador Antonio Villalta (Daniel Giménez Cacho, “Bad Education”) is gored by a bull, he loses his beloved Carmen de Triana (Inma Cuesta) in childbirth. His daughter, Carmencita (Sofía Oria), is raised by her loving grandmother, Doña Concha (Ángela Molina, “Broken Embraces”), until her death returns the young girl to her disabled father. But his former nurse now second wife, the gold digging Encarna (Maribel Verdú, "Y Tu Mama Tambien"), won't be displaced and keeps the young girl shackled by chores. When her father dies, Carmencita escapes into the woods, where she meets up with a half dozen bullfighting dwarves and finds her true calling as "Blancanieves." You want a cinematic fairy tale? Forget Hollywood's attempts. Spanish writer/director Pablo Berger ("Torremolinos 73") was planning his silent black and white bullfighting version of "Snow White" well before "The Artist" came into play and although it cannot avoid the comparisons, it is much different from last year's Oscar winner. The film itself is strikingly shot by cinematographer Kiko de la Rica ("Sex and Lucia," "The Last Circus") yet it is noteworthy that Berger is not trying to recreate a silent film, as was the case with "The Artist," but referencing films throughout cinema history. This one just happens to be in glorious black and white and doesn't rely on any dialogue that cannot be communicated with a title card here and there. Much of the film's emotion is conveyed by Berklee College of Music grad Alfonso de Vilallonga’s (“My Life Without Me”) music, which celebrates Spain with uptempo guitar and flamenco when it isn't tipping its hat to Bernard Herrmann during a scene inspired by Hitchcock. Young Sofía Oria is so great as Carmencita, we hate to see her grow up. The child is incredibly expressive, facing up to the hate emanating from Encarna (that name sounds like the Spanish for evil meat eater) with her steadfast friend, Pepe, surely the most charismatic rooster to ever grace a movie screen. Ángela Molina exudes a fierce love for her granddaughter, exemplified in her fateful flamenco. Verdú is her polar opposite, dripping evil beneath both nurse caps and fashionable hats while Giménez Cacho always has our sympathies, even when rejecting his newborn daughter. The six dwarves (Carmen is actually the 7th here), including one in drag, seem imagined more from the mind of Werner Herzog than Walt Disney, with Emilio Gavira's Jesusin the story's more melancholy than happily-ever-after Prince Charming. Berger's script builds dread with foreshadowing, Pepe's talent for dodging trouble making us wonder just how long his luck will last just as Carmen de Triana's failure to catch her husband's hat as he faced his sixth bull, Lucifer, seals his fate. The Grimm Brother's touchstones are ingeniously incorporated, an apple coming into play whose briefly exposed core doubles for Encarna's heart while the reflection of a swimming pool stands in for that iconic mirror. We also see glimpses of other tales, like Little Red Riding Hood, or Beauty and the Beast by way of Jean Cocteau's hanging sheets. This is Grimm Brothers the way they intended, dark and unsettling but with an appreciation for beauty and hope. 2012's Foreign Language entry from Spain is pure cinema.

Sophomore writer-director Berger (“Torremolinos 73 (2003)”) explores making a movie without sound, much like last year’s Oscar-winning “The Artist” but also very different. Both films are black and white, have great music soundtracks, a terrific story and talented production teams in front of and behind the camera. “Blancanieves” is not trying to be a silent movie but one without sound, telling a visual story paying homage to its classic source material just as “The Artist” honors the golden age of silent movies. The story will be familiar to many, primarily femmes, and begins with famous matador Antonio Villalta (Daniel Gimenez Cacho) preparing to face six bulls in the ring, the last of which is the infamous Ferdinand. He dedicates the fight to his very pregnant wife Dona Concha (Angela Molina) but things go terribly wrong and he is gored by Ferdinand. While Antonio goes under the knife, Concha goes into labor and has a very difficult time of it. When comes out of surgery, he is greeted with the news that his wife died in childbirth. When the infant is presented to him, he rejects the baby girl, too hurt by the loss of his beloved Dona to even look at his child. This is where the fairy tale gets very Snow White. Encarna (Maribel Verdu), is the nurse caring for the recovering, but paralyzed, Antonio. From the moment she arrives on screen, you know she will do something wicked. (Verdu lacks only a mustache to twirl as the story’s very bad guy.) The child grows into a bright, pretty and inquisitive young girl, Carmencita (Sofia Oria), who has been kept away from her father by the horrible Encarna. She has insinuated herself in the mansion, marrying Antonio and keeping him and his large fortune under her control. She cannot control, though, little Carmencita, who begins to secretly visit her isolated father. Antonio sees his beloved Dona Concha in his pretty daughter and a real bond is formed between the estranged father and daughter. She shows an interest in his bullfighting fame and Antonio trains her for the bullring. Soon, though, Encarna learns of her husband’s new interest in his daughter and sees her lifestyle, and his fortune, taken away from her. She resolves this problem quite neatly. Things get much more complicated when Carmelita, now grown-up Carmen (Macarena Garcia), comes home again and is an even greater threat to Encarna, who handles things in her own wicked way. Suffice it to say, what follows is Snow White and the Seven (here, six) Dwarfs. The rest of this beautifully shot and imaginatively told fairy tale should be seen my many, but only a few will likely get to enjoy it. This is a shame for the audience it is intended for.