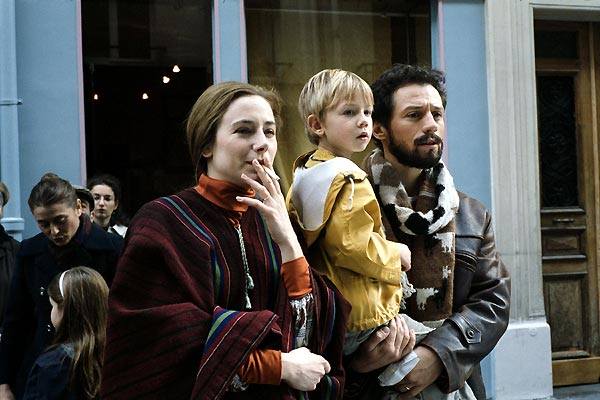 Nine-year old Anna (Nina Kervel) leads a happy life with her well-to-do Spanish lawyer dad, Fernando (Stephano Accorsi), and French glam magazine writer mom, Marie (Julie Depardieu). But, this stable world is about to turn upside down when her parents are bitten by the bug to right the world's wrongs, disrupting the girl's idyllic life, and Anna will "Blame It on Fidel."

Julie Gavras, daughter of Costa, makes an impressive feature debut with a work that shows her dad's political chops in a style all her own. This is simply one of the best film's ever from a child's point of view. Adapted from a novel by Gavras and Arnaud Cathrine, this exquisitely told tale presents us with Anna de la Mesa (the astounding Nina Kervel-Bey), a pampered princess angered that she must share her home with an unknown aunt and cousin from Spain. Marga (Mar Sodupe) has been extricated from the country by her lawyer brother Fernando (Stefano Accorsi, "L'Ultimo bacio") after her anti-Franco husband was killed. Now Anna's father's guilt leads him and his feminist wife Marie (Julie Depardieu, "A Very Long Engagement") into a leftist lifestyle that rips the rug out from under their daughter, who goes kicking and screaming into a smaller apartment, a world peopled with foreign sitters and bearded revolutionaries, strange foods and forced removal from her beloved Divinity class. Frequently hilarious (watch Anna attempt to play 'shop' with three Communist barbudos) and always exceptionally intelligent, "Blame It on Fidel" shows both sides of its political arguments and gives its pouting protagonist an open intelligence that often leaves her parents' arguments stranded (what is the difference between sheep and solidarity, for example). Playing the type of young girl who simply must come out on top in school, young Nina Kervel-Bey could so easily have become unpleasant with her baby fat pout, but the perplexing state of affairs she finds herself in bring on a maturity that is fascinating to watch. Gavras's direction of the child as adult and the adults often childish is pitch perfect. Hands down, of the half films previewed for the MFA's 12th Boston French Film Festival, "Blame it on Fidel" is the best discovery. It's also one of the best films of the year.