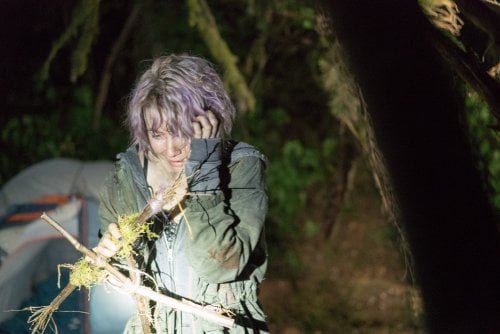 Twenty years after Heather Donahue and her crew disappeared in Maryland's Black Hills Forest, her younger brother James (James Allen McCune, Showtime's 'Shameless') finds disturbing footage she purportedly shot posted on Youtube by a 'darknet666.' His gut tells him she's still alive, his friend Lisa (Callie Hernandez, the upcoming "La La Land") needs a subject for her film school documentary thesis and so together with James's childhood friend Peter (Brandon Scott, "Feast") and Peter's girlfriend Ashley (Corbin Reid, TV's 'How to Get Away with Murder') they find the two people behind darknet66 to guide them to where Lane (Wes Robinson, Showtime's 'Roadies') found the footage from Heather's hunt to find the "Blair Witch."

The "You're Next" team of screenwriter Simon Barrett and director Adam Wingard surprised ComicCon audiences earlier this year when their "The Woods" turned out instead to be a sequel to "The Blair Witch Project" (documentarian Joe Berlinger took a stab in 2000 with "Book Of Shadows: Blair Witch 2"). The duo work hard to update the scares with the ensuing years' technological advances but anyone who's seen the original film will experience a strong case of déjà vu as this isn't so much a sequel as a franchise-renewing remake. The film's well crafted but bereft of any new ideas, moving the series' mythology forward by perhaps all of a millimeter. Back in 1999 Eduardo Sánchez and Daniel Myrick really shook things up with their found footage film anticipated by a savvy online marketing campaign which had many initial audience members believing what they were seeing was real. The highly influential film kicked off a slew of similarly shot horror films, but while a few were good (2007's "Paranormal Activity"), none achieved "Blair Witch's" hysterical reception. At first, Lane and Talia (Valorie Curry, "The Twilight Saga: Breaking Dawn - Part 2") look like they may shake up the mix, the Goth darknet666 duo creating tension among the group when they refuse to guide James and his friends to the spot where Lane found Heather's DV tapes and memory cards unless they can join the expedition outright. But James sees no other option so off the six go equipped with a GPS, walkie talkies, earbuds, multiple cameras (including head mounted varieties) and a camera-equipped drone (the latter provides some nice overhead shots while also acting as a scout). Fording a stream, Ashley gets a deep gash in her foot, is bandaged up and the group continues to camp. Night comes in and the booming crash of what sounds like falling trees panics all. In the morning the emblematic stick figures are found hanging around the camp. The group decides to head back, but Lane and Talia are forced to split off when Lisa accuses Lane of having faked the figures and he confesses (only to impress upon them the real dangers they were facing, he insists). And then...all the same things from the first film are pretty much repeated, the serious and strange developments of Ashley's injury about the only difference. The group finds they've traveled in a circle, ending right back at their camp, time begins to warp, people keep wandering off, their screams heard in the distance. Eventually James stumbles upon the house no search party ever found and enters against Lisa's urging (in a nice touch, it's located right by a peculiar tree the group had stopped to look at on their hike in). James thinks he sees Heather inside, but he's being lured by the titular entity (yes we get a glimpse). Lisa follows and has an adventure with the underground tunnels in a sequence right out of "The Descent." If you've never seen "The Blair Witch Project," you'll probably find this sequel pretty horrific, but series veterans may find themselves bored. It's not a bad film, just an unnecessary one. Grade: