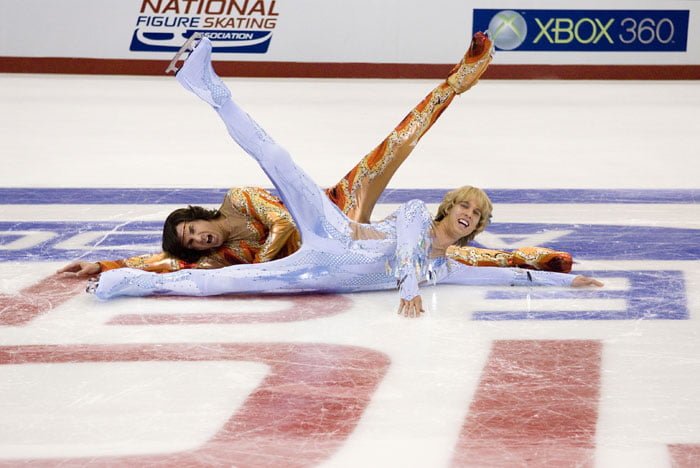 Jimmy MacElroy (Jon Heder, "Napoleon Dynamite") is an elegant, precise, classical skater beloved by fans of the sport but bad boy Chazz Michael Michaels (Will Ferrell, "Stranger Than Fiction") has just as many fans - mostly female - for his swaggering sex on ice routines. When the two tie at the World Championships, neither can bear to share the gold and they erupt into a brawl that shames the sport and gets them both stripped of their new title and the right to ever skate as male singles competitors again. Three and a half years later, the has-beens are given a new idea - to team up as the first male/male pairs team and return to the sport with "Blades of Glory."

At first, "Blades of Glory" seemed like it would be "Zoolander" on skates, a story of rivals pairing together in a career more commonly associated with the feminine side, but this comedy stands (and falls) on its own. Veteran funny guy Ben Stiller acts as producer with a script from unknown brothers Jeff and Craig Cox and the feature directing debut of Josh Gordon and Will Speck, and together with an experienced comedic cast, they make the laughs look as easy as the champions do the sport they're skewering. MacElroy and Michaels are introduced as the extremest of opposites in typical sports bio form, with Heder gliding about in an outrageous peacock costume complete with beak hand and tail feathers (costumer designer Julie Weiss, "Hollywoodland," should be put on awards lists now) and Ferrell aflame in yellow and orange, crotch grabbing to rock. MacElroy's the adopted son of billionaire Darren MacElroy (William Fichtner, "Crash," "The Longest Yard"), a man who obsesses with training perfect athletes (underdeveloped as a character and dropped from the film), while Michaels touts himself as a 'lone wolf,' a man with four national championships and one porn film under his belt. After the melee that sets the Worlds' mascot on fire, Michaels works as a skating wizard in a kiddie show, getting drunk and hitting on the ice fairies, while MacElroy, 'de-adopted' by his dad, is reduced to working as a sports store shoe clerk. MacElroy's stalker Hector (Nick Swardson, "Click," "Reno 911!: Miami") continues to haunt him, even though he's embarrassed by Jimmy's has-been status, and it is Hector who finds the loophole that could return his obsession to stardom. MacElroy's approach to Michaels at the Grublets show ends up in fisticuffs yet again, but when their brawl is broadcast, MacElroy's former Coach (Craig T. Nelson, "The Family Stone") spies lifts and throws in their hurls and blows. Soon the battling pair are training in a cold storage warehouse, trying to meld their opposing styles both on and off the ice. They're also being targeted by reigning brother and sister champs, Stranz (Will Arnett, TV's "Arrested Development," "Let's Go to Prison") and Fairchild Van Waldenberg (SNL's Amy Poehler, "Mean Girls"), whose downtrodden younger sister Katie (Jenna Fischer, TV's "The Office") sparks with the sexually inexperienced MacElroy. As the ickily close Stranz and Fairchild plot to use Katie to their advantage, Coach aspires to pull off the lion lotus, an insanely dangerous pairs move he developed, with MacElroy and Michaels. Heder and Ferrell are perfectly paired here, the former all blond ringleted innocence, the latter throwing his dubiously toned physique around as sex personified. It's Ferrell who does most of the heavy lifting, though, first winning the 'boy' position with Coach, but also working his lines BLADES OF GLORY, his lack of education coming out in a slow build that is both silly and sympathetic. Heder's amusing going hissy and prissy, but his first kiss scene with Fischer is one of the film's few flatlines. The filmmakers use cliches like the straight guy's gay ick factor and shots to the groin, but Ferrell and Heder work them for titters rather than groans. Also terrific are real-life marrieds Arnett and Poehler, who let us see a simmering incestuous passion barely kept at bay. Arnett works the physical stuff, a visual joke posed on a bear rug, while Poehler works the facial expressions, a scheming ice queen. Their routines are hilarious, particularly their last, an aggressively tasteless number involving JFK and Marilyn. Nelson gives a slightly disturbed spin to his determined Coach and skating star Scotty Hamilton and his commentator partner Jim Lampley get totally engaged in the silliness. Other skating stars on hand are Nancy Kerrigan, Brian Boitano, Dorothy Hamill, Peggy Fleming and Sasha Cohen (getting the honor of catching Michaels's jock strap - in the face), but they are never seen on ice nor in frame with the actors. Cameos come from "The Daily Show's" Rob Corddry as the Grublets producer, Andy Richter as a Mountie and Luke Wilson as a sex therapist. Techs are well done, with skating stunts pretty seamless to the average eye (wires and green screen were used along with some actual skating). The film is well paced, with only a slight second to third act dip, a common pitfall when plot wrapup becomes a comedy's forefront. The soundtrack is a great mix of songs that play to the characters, although competitive skating does not allow the use of vocals. In particular, Queen's 'Flash Gordon' theme is both an out there and just right choice. American Idol runner up Bo Bice does the "Blades of Glory " theme. Again, kudos to costume designer Weiss whose clothes get laughs both on and off the ice.

During the 2002 Wintersports competition, hot shots figure skaters Chazz Michael Michaels (Will Ferrell) and Jimmy MacElroy (Jon Heder) compete toe-to-toe for the gold. When they earn identical marks, they are forced to share the coveted medal. They mount the podium to receive their glory but their rivalry gets the best of them and a brawl ensues on international television! Disgraced and banned from the sport, the two are presented with a loophole that will allow them to compete again – as a pairs couple - in “Blades of Glory.” It has been 31/2 years since the misguided on-podium brawl. Chazz is the “star” of a low rent ice show and Jimmy works at a skating rink. Since their fame days Jimmy has been stalked by his number one fan, Hector (Nick Swardson), an ardent skating enthusiast who finds a loophole in the Wintersports rules. He tells Jimmy that he and Chazz can still compete, as long as they don’t mind skating with each other. The long time opponents balk at the idea but the chance to skate competitively once again is too good an opportunity to miss and they bury their differences for the chance to go for the gold again. Tyro co-directors, Josh Gordon and Will Speck, take the routine sports comeback and turn it on its head. We’ve seen this kind of flick before with “The Cutting Edge (1992)” (with D.B. Sweeney and Moira Kelly) immediately coming to mind. But, Gordon and Speck break new ground as Chazz and Jimmy take advantage of the loophole in the Wintersports rules that allow two guys to compete in pairs competish. The result is a goofy, sometimes edgy comedy that seamlessly combines live skating (much done by Ferrell and Heder) with slick digital effects that make you believe these guys could do a triple toe loop or a camel. Will Ferrell has done the bad boy thing before but, this time, with Jon Heder as his foil, he makes you both loath and like the guy. Heder, who we first see skate in a singles competition in an outfit that rems of Bjork’s swan dress worn at the Academy Awards a few years ago, is nice guy Jimmy who loathes Chazz’s bad boy persona. Heder plays Jimmy as fey to Chazz’s macho man but he is more than willing to face off with his much larger foe over their “artistic” differences. There isn’t much by way of chemistry between the two – except on the ice where their physical comic abilities and special effects combine nicely. Newbie helmers Gordon and Speck, working with a script by Jeff and Craig Cox (from the story by Busy Philipps, John Altschuler and David Krinsky), have fun with their stars and subject matter. Their supporting cast, led by Will Arnett and Amy Poehler as the boys main competition, the Van Waldenbergs (quite amusing), is supplemented with a who’s who list of figure skating greats – Scott Hamilton, Brian Boitano, Dorothy Hamill, Peggy Fleming and Nancy Kerrigan make cameo appearances. Blades of Glory” is not a great comedy but one with enough laughs, skating action and attitude to amuse its audience, particularly the skating fans who will be pleased by the on rink performances. The potential for homophobic humor is undermined, almost nonexistent, but this is not a problem as the slapstick is pretty amusing and the skating routines original. While I’m not exactly a fan of figure skating, I have been exposed to it for many years through the World Skating and Olympic competition, making “Blades” appealing to the sport’s fans.