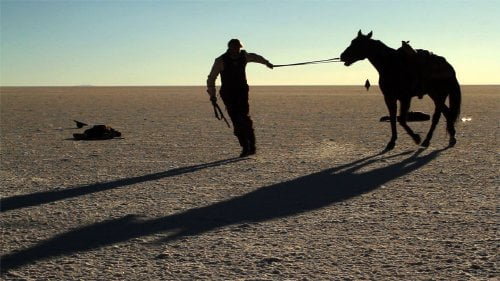 Everyone knows that Butch Cassidy and the Sundance Kid were killed in a shootout with Bolivian soldiers, right? Well, what if they managed to escape death? And, what if one of them survived and lived a quiet rancher’s life as “Blackthorn”?

I like a movie, especially a western, which turns perceived history on its ear and tells a story of what could have been. Screenwriter Mateo Gil returns to the helm for the second time with a script by Miguel Barros and the craggy, handsome face of Sam Shepard as Butch Cassidy, AKA James Blackthorn. Blackthorn has led a quiet life raising horses and loving his Indian mistress, Yana (Magaly Solier). That is, until he learns that he has a son living in California. He then decides to sell his ranch and take his fortune back to the US and reunite with the grown up son that he never met. While Blackthorn is making his way through the remote Bolivian countryside on his way to a shipping port, he is ambushed and his horse taken. But, before the thief can make his getaway with James’s ride and all his money, Blackthorn knocks him off the horse with a single shot. Unfortunately, Blackthorn’s horse gets spooked and charges off with James looking helplessly on as his fortune speeds away. The horse thief, it turns out, is a fugitive from a mining operation who stole $50000 from the wealthy owner of an ore mine. Spaniard Eduardo (Eduardo Noriega) tells Blackthorn that he is being pursued by a bloodthirsty posse of a dozen or more riders who want their boss’s money back. He thought, Eduardo explains, that Blackthorn was a member of the hunting party. He offers the old outlaw part of the treasure he has hidden if he will help the thief get it. Old Butch agrees and the adventure really kicks in. The story goes in unexpected directions when James and Eduardo must trek across a forbidding salt flat, ala “Lawrence of Arabia,” to escape their pursuers. “Blackthorn” is an old fashioned western that brings the mystery of the demise of Butch and Sundance to closure. Craggy-faced Sam Shepard gives a taciturn performance as the former bank robber who went straight and lived his adult life in peace – until Eduardo enters the picture. Then, the film becomes an exciting chase as Blackthorn must use all his wiles to save his neck and make his getaway. The only shortcoming is a tacked on side story with Stephen Rea as Butch’s old nemesis from the railroad robbing days. It did not fit with the otherwise tightly told tale. Shot on location in Bolivia, Mateo Gil uses his locales to excellent advantage and gives the film a realistic feel – no Hollywood sets were injured during the making of “Blackthorn.” Techs are solid across the board with Juan Ruiz Anchia using his lens and stark and beautiful landscape to great effect. I love westerns and a good story that opens new doors of imagination to the viewer. “Blackthorn” is both.