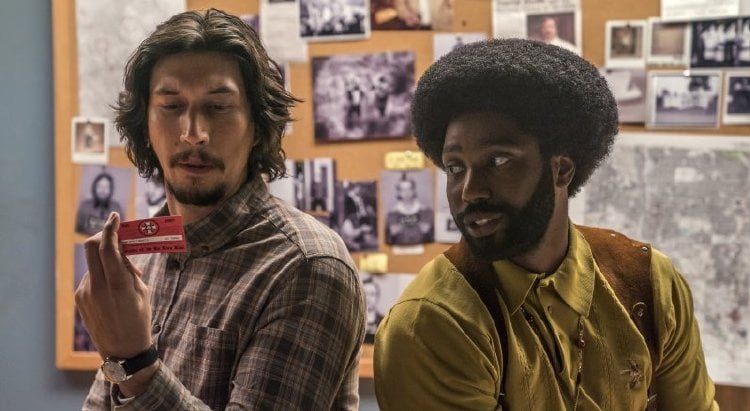 Ron Stallworth (John David Washington) was a rookie cop, and first African-American, on the Colorado Springs PD. It was a turbulent time in the 1970s and Ron goes undercover, first with a local black activist group. Soon, he spots an ad seeking members to a new chapter of the KKK and calls the number. Then, in an incredible truth-is-stranger-than-fiction story, with his fellow officer, Flip Zimmerman (Adam Driver), he infiltrates white supremacists as the first “BlacKkKlansman.”

After seeing an ad encouraging minorities to apply with the Colorado Springs Police Department, Ron Stallworth (John David Washington, HBO's 'Ballers') became its first black officer. Racist jibes from a fellow officer combined with boredom in the records department led Ron to ask Chief Bridges (Robert John Burke) to give him an undercover assignment. Another ad, this one for the KKK, led him to another first when Ron became a "BlacKkKlansman." Cowriter (with Charlie Wachtel, David Rabinowitz, Kevin Willmott)/director Spike Lee has taken Stallworth's true 1970's tale and made it into a buddy cop comedy targeting Donald Trump. The movie's good, especially when Adam Driver, as Ron's Jewish white stand-in Flip Zimmerman, is on screen, but its message is delivered with a hammer while some of its more intriguing ideas are glossed over. Still, if you want to have a good chuckle at David Duke's (Topher Grace) expense, "BlacKkKlansman" certainly entertains. Ron's first undercover assignment is to infiltrate a speech being given by the Black Panthers' Stokely Carmichael, now called Kwame Ture (Corey Hawkins), to see if he is inciting violence. Ron sweet talks the event's organizer Patrice Dumas (Laura Harrier), President of the Black Student Union, making a connection that transcends the job, a detail Ron never mentions in his undercover guise. Patrice's hatred of the police is born out when she and her party are verbally and physically harassed just taking Ture to the airport by Ron's CSPD nemesis . When Ron calls the KKK, he gets local chapter head Walter Breachway (Ryan Eggold, TV's 'The Blacklist') on the phone and proceeds to rant about every minority under the sun, much to the amusement of his coworkers. But the KKK, which insists it be called 'the organization,' proves cautious, and so Ron must convince Flip to go in his stead. Flip isn't thrilled with the idea, one valid concern that the two men's voices are different (Ron is proud of his ability to pass for white OR black on the phone, a claim proven true even as David Duke explains why he'd never be fooled), but his exposure to the group finds him embracing his Jewish heritage more and more. Things come to a head when Ron is assigned as Duke's protection for a visit to the community where he himself is to be indoctrinated into the organization just as he uncovers a KKK plot against his girlfriend's Union. Chants of 'White Power' are met across town with 'Black Power,' but the former is armed with a bomb. Lee and his cowriters find humor amidst horror with the utter ridiculousness of KKK beliefs, its members mostly backwards rubes like Ivan (Paul Walter Hauser, "I, Tonya") barking mad racists like Felix (Jasper Pääkkönen) or the overly confident entitled like Duke. More insidious is Felix's wife Connie (Ashlie Atkinson, notable), an overweight housewife who pauses in the face of actual violence, but is so susceptible to her husband's affections she agrees to plant a bomb. But if the force for bad is black and white, the force for good is grayer, Chief Bridges' true motivations never entirely clear - on the one hand he ferrets out his bad egg, on the other he wishes to keep Stallworth's successful operation under wraps. As Stallworth, John David Washington employs a dry deadpan that serves the film's more comedic aspects, but never truly comes alive as a character. It's an odd thing indeed when it is his white counterpart, Adam Driver, who more fully expresses the damage dealt by racism. Grace was the perfect choice for Duke, his matter-of-fact yet flawed surety the banality of evil personified. Harry Belafonte has a small but effective role relaying tales of lynching to the Black Student Union. The film's closing credits feature footage of the 2017 riots in Charlottesville and an homage to the white protestor, Heather Heyer, killed there, but the message has already been given loudly and clearly with Duke's 1970's proclamations of 'America First!' Grade:

I remember this story from a ways back and my reaction was, “How the heck did a black cop infiltrate the KKK and pull it off?” Spike Lee, with his team of scribes, adapts Ron Stallworth’s 2014 memoir, Black Klansman, and fills in the blanks for me. It is an amazing story and Lee and company do it solid. Of course, Spike wears his “I’m black and proud” heart on his sleeve through the whole of “BlacKkKlansman,” At one point, when civil rights activist Stokely Carmichael (Corey Hawkins) gives an impassioned talk to members of a black student union, Lee’s camera does not pan the audience for reaction. Instead, he uses a montage of gorgeously composed and lighted head shots of beautiful black men and women. Lee’s message hits you over the head, frequently, but that is his right (and I am glad he exercises it). As to the amazing investigation by Stallworth and Zimmerman on the clan, Lee melds the extremely serious subject – hate – and the” WTF!” over the seeming ease of the rookie undercover cop to penetrate, with his white, Jewish stand-in, the KKK. The dark humor of the undercover team about their incredible luck is the perfect foil to inner machinations of the hate espoused by the Ku Klux Klan. The cast is well-led by John David Washington and Adam Driver as the good guys. The bad guys are given shrift, though not sympathetically, by Topher Grace as Imperial Grand Wizard of the KKK, David Duke, and Ryan Eggold and Jasper Paakkonen as clan henchmen, Walter and Felix. They are two-dimension representatives of racist venom and hatred and we love to hate them. The good guys’ triumph over the KKK back in the 1970s Is tempered by the filmmaker with his cautionary epilogue. But, “BlacKkKlansman” is a hopeful tome that, if we could defeat racist hatred back then, we can do it again. Now, though, it is a bigger job and involves us all.