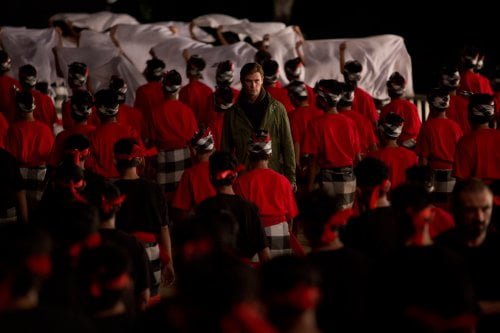 It would be difficult to determine this forgettable thriller was from director Michael Mann ("Thief," "Public Enemies") if one didn't know it going in. After an (overly) extended micro-zoom-in supposedly depicting a malware attack, a humorless team with very little characterization to get us involved is assembled to race around exotic Bondian locations in an attempt to stop a blackhat whose end goal isn't revealed until the third act. With a first credited screenplay by Morgan Davis Foehl that throws around a lot of technical jargon and mates its two prettiest leads (Hemsworth and "Lust, Caution's" Tang Wei as Dawai's network engineering sister) with little in the way of dialogue between them, Mann fails to even achieve the groundbreaking signature look he's known for (Dion Beebe's luscious digital work on "Collateral," for example) from director of photography Stuart Dryburgh ("The Secret Life of Walter Mitty"), whose irritating shallow focus obscures much of the early action. "Blackhat" is most notable for highlighting the human toll of high stakes hacking in far bloodier terms than Sony recently experienced and a few well executed action scenes. Once Dawai's given access to the unsuccessful code deployed against U.S. power plants, he recognizes the RAT (remote access tool) as a revised version of something he'd written with his college roommate Hathaway. Carol twists her superior's (John Ortiz in another thankless role) arm and Hathaway, imprisoned for cyber bank thefts in the tens of millions, makes a deal - if he finds the perp, his sentence will be commuted. All bulked up from his prison regimen, Hathaway's more likely to find and bludgeon the bad guys than outwit them with coding, making the FBI's team feel awfully redundant (as the U.S. Marshall assigned to keep tabs on the prisoner, Holt McCallany ("Bullet to the Head") at least gets one heroic moment). From a 'burn' in a U.S. Koreatown restaurant, where Hathaway kicks some serious ass, to the devastated nuclear plant in Hong Kong, to Malaysia and ultimately Jakarta, "Blackhat" goes through its paces, losing the one character of some interest along the way. The final showdown between Hathaway and the man ultimately responsible for all the mayhem (Yorick van Wageningen, Fincher's "Dragon Tattoo" remake, revealed to the audience in early goings) is a well staged cat and mouse game through a parade in Jakarta, but the film's coda is laughable in its choice of costume for Hathaway (a shirt which reveals the very thing he's trying to hide) and Tang Wei's suspicious behavior. As if to highlight the film's third tier status in Mann's filmography, Tom Cruise's ("Collateral") cousin, William Mapother, has a role as an NSA dupe. Grade: