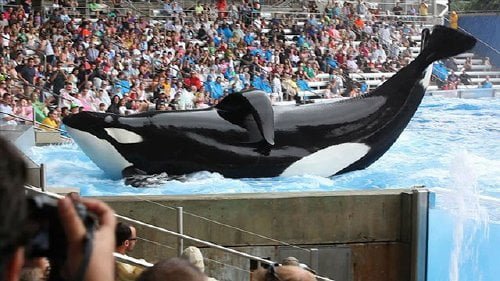 There has never been a report of a human death by an orca attack in the wild. In captivity, though, things are completely different. Ever since the first killer whale was put into confinement in the first sea park there have been many attacks with some of them deadly. Why this aberrant behavior only occurs when man interferes with nature is the subject of “Blackfish.”

In 1984, a baby orca was caught in the wild, separated from its grief-stricken mother and sent to Victoria, B.C. where it was named Tilikum and taught to perform during the day and be bullied at night by the other orcas caged with him in a 20x30 foot steel container. In 1991, a Sealand trainer, Keltie Byrne, was killed and Tilikum was sold to Seaworld. Almost twenty years later revered trainer Dawn Brancheau was killed during a performance which Seaworld attributed to her ponytail being caught, but cowriter/coeditor (with Eli B. Despres)/director Gabriela Cowperthwaite didn't think that story jibed with her autopsy report and she began to investigate the "Blackfish." Springing off from "The Cove's" dolphins, marine wildlife who also have complex emotional and social lives, "Blackfish" is a double-barreled indictment of Seaworld, not only for its untruthful internal and media campaigns, but for the endangerment of its employees performing with the majestic mammals their practices literally drive mad. Tilikum not only still performs today, but 50% of all Seaworld orcas globally are his progeny. Cowperthwaite includes some hair-raising footage which gets her message across without exploitation, indulging in one sleight of hand edit to set her stage (we see injured trainer Dawn Brancheau on the water's surface, then an orca barreling upward from below a la "Jaws," only to break the water into a Seaworld show). She's gathered together a great list of interview subjects, from witnesses to the Canadian Sealand 'accident,' to a haunted orca hunter, the fiancee of a Seaworld-trained performer killed at Tenerife's Loro Parque and several former Seaworld trainers. The mind set of the animals themselves is investigated by looking into hunting practices, where male adults try to lure ships away from escaping mothers and calves, park grouping and reassignments where bereft animals are separated from their young and new animals face hostile orcas of different cultures and the captivity itself, where most male orcas and some females experience dorsal fin collapse, a condition Seaworld touts as 'normal.' The trainers and filmmakers debunk many public statements of the water park company. A training film discusses the 'years of study' it takes to become a trainer while former employees talk about an entirely different reality and hear from trainers who only stay because of their love for the animals. And there is a visible connection between the orcas and these trainers, even Tilikum. It is more than evident that their treatment has resulted in biting the hand that feeds or even some kind of psychosis. One amazing, lengthy bit of footage chronicles the ordeal of Ken Peters, who was repeatedly dragged to the bottom of the training pool by an orca, saved only by his incredible calm throughout. But Cowperthwaite never interviews Peters nor explains why she hasn't, one of her film's few failings. An OSHA suit against Seaworld over Brancheau's death is used as the doc's backbone and at film's end we learn that the trainers are no longer allowed in the water with the whales. But who will fight for the whales? Hopefully films like "Blackfish" will raise awareness among a public who should be boycotting these parks. Despite the 'killer whale' moniker, there is no record of an orca ever harming a human in the wild.

Documaker Gabriela Cowperthwaite (with co-scribe Eli B. Despres) does not have much sympathy for the sea parks that have exploited orcas for decades. The ones that suffer from the captivity, though, are not only these sea-going mammals but also the trainers who bear the brunt of the man-induced psychosis of these giant creatures. The film more or less focuses on Tilikum, a bull orca that claimed the lives of three people – trainers Kiltie Byrne and Dawn Brancheau and civilian Daniel P. Dukes. Tilikum is only one piece to the deadly puzzle, though, and Cowperthwaite chronicles the many orca attacks that kept taking lives in the name of making money for the sea park corporations. (Laws now prohibit the trainers from being in the water with these not-so-gentle giants during performances.) If anything, “Blackfish” is done with very good taste and does not exploit the tragic deaths, even when video footage is available. Instead, the filmmaker shows examples of attacks where the victims survive – in one such an near deadly incident, an orca pulled its trainer to the pool bottom repeatedly. The trainer, Kenneth Peters, somehow and miraculously, survived the ordeal that lasted many minutes, maintained an incredibly cool head through the entire attack. “Blackfish” preachers to the choir of those impacted by the gut-wrenching “The Cove (2009),” about the selection of wild dolphins for sea parks and the slaughter of those not chosen. We who have been long term proponents of banning these magnificent beasts for sea park exploitation whole heartedly agree with Gabriela Cowperthwaite and the intent of her film. Hopefully, others not familiar with the subject will take the time to watch “Blackfish” and “The Cove.” This will change many minds, I think.