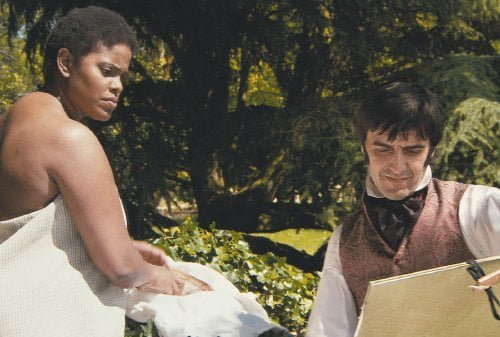 1815, the Paris School of Medicine. Scientist Georges Cuvier (Francois Marthouret) astounds his audience by unveiling a naked black woman to reveal her 'Hottentot apron (extended labia).' This woman was Sarah "Saartjie" Baartman (Yahima Torres), the nanny of Dutch Afrikaner Hendrick Caezar (Andre Jacobs, "Invictus") who convinced her to travel with him to London, where they would make their fortune with the scripted freak show that would label her the "Black Venus."

Tunisian born cowriter (with Ghalia Lacroix, "Games of Love and Chance")/director Abdellatif Kechiche ("The Secret of the Grain") has been making films about the immigrant experience in his adopted France, all involving theatricality of one form or another. "Games of Love and Chance" used the play-within-a-movie approach with Muslim teens in a Parisian high rise experiencing the themes of the 18th century play they are producing for school. "The Secret of the Grain" involved the rite of making couscous and the turmoil of opening a floating North African restaurant in a French port town. With "Black Venus," Kechiche takes on the real life tale of Sarah Baartman, a woman mercilessly exploited because of her racial characteristics. This is Kechiche's harshest film, difficult to watch as it plays out like "The Elephant Man" with racism added to its subject's trials. The director uses a circular device that begins and ends in that medical amphitheater. After listening to Cuvier compare his subject to an ape, we go back seven years to pre-Victorian London where Saartjie is already numbing herself from her circumstances with copious amounts of alcohol. Caezar insists she is a free woman, even providing her with servants to take her about the city, but when the mobs enter their shabby theater, Saartjie is chained, clad in a body suit to give the appearance of naked flesh. She's prodded and encouraged to act like a beast, scaring spectators, then made to do a tribal dance which shows off her quivering, large buttocks. The thing which upsets her the most, though, is Caezar's final flourish - inviting the audience to touch her. One customer, Alexander Dunlop (Jonathan Pienaar, "Skin"), is incensed by what he sees and reports Caezar. The affair goes to trial and although Saartjie testifies that she is acting and performs of her own free will, the scandal hurts them. Caezar 'sells' his free servant to animal trainer Reaux (Olivier Gourmet, "The Son") who takes her to France where her humiliation in the salons of society reaches new heights. She spends her last days in a bordello with Reaux's former assistant Jeanne (Elina Löwensohn, "Declaration of War") but infection turns her out onto the streets where she dies alone. "Black Venus" is not just the story of Baartman, but a look at society. It's surprising that someone is enlightened enough to protest her treatment at the turn of the nineteenth century and many of the lower classes celebrate Baartman in poetry and song. The debauchery of French aristocracy is vile to witness, however, with Baartman paraded as the sexual springboard to drawing room orgies. Worst are those who should be most enlightened, the doctors and scientists who see her only as an object of study (with them, she once again refuses to allow them access to the areas they are most interested in and we realize Kechiche's theatrical cunning in his prologue). She's measured and prodded and despite all appearances to the contrary, compared to subhuman species. In a jab at the media, a French journalist (Jean-Christophe Bouvet) asks for Sarah's story - again we get a circular tale, beginning with the debunking of the 'African Princess' moniker she's been given which, after hearing a tale so upsetting he apologizes for her tears, is the 'truth' he decides to go with. Kechiche uses a lot of close takes to 'capture' Torres in the frame when she is not performing. Performances - and there are many, including an entirely different kind with Jeanne in the whorehouse - are allowed to play out in real time, turning the discomfort screws on the audience, forced to witness the degradation of another human being. Yahima Torres gives a great performance, maintaining Baartman's dignity in the worst of circumstances, yet also an air of mystery. The woman endured, but life at home may have been no better. Her history continued well past her death, as provided by the filmmaker in a pre-credit roll title sequence.