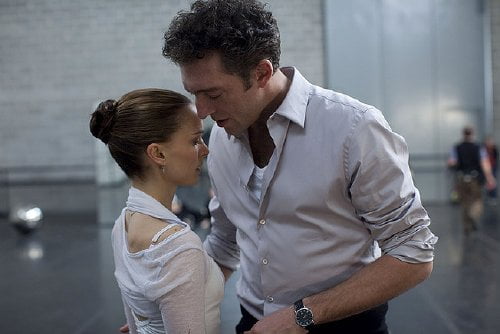 New York City Ballet director Thomas Leroy (Vincent Cassel, "Ocean's Thirteen," "Mesrine") decides to open his new season with a stripped down Swan Lake and the launch of a new company star as the Swan Queen. Nina Sayer (Natalie Portman) is obsessed with winning the role with perfect technique, but Thomas insists that while she's a shoo-in as the fragile white swan she needs to lose control in order to master the seductive "Black Swan."

It looks like director Darren Aronofsky ("The Fountain," "The Wrestler") has crossed paths with documentarian Frederick Wiseman, who followed up his meditation on the Paris Ballet with the wonderful "Boxing Gym." Aronofsky follows up his tale of a wrestler on the comeback trail with a psychological horror about a rising dance star's mental breakdown. There's more in common between the two films than at first meets the eye, but "Black Swan" is a more gonzo experience with roots in classics like "The Red Shoes" and "All About Eve" tripped out by way of "Suspiria" and "The Devil's Advocate." The film begins within Nina's dreams, fitting as the weirdness we'll be seeing is mostly inside her head. Nina dances the prologue to Swan Lake, where Rothbart (Sergio Torrado) casts his spell on the princess. (Like "The Red Shoes," Nina's story will echo the one she is preparing to dance.) She lives with her overly protective, invasive mother Erica (Barbara Hershey, "Hannah and Her Sisters," "Beaches"), a former dancer, and loves the color pink (the film's color design is composed of black, white, grey, pink and red). Wearing her pink coat and white scarf, Nina takes the subway to class and spies her doppelganger attired in black. This turns out to be Lily (Mila Kunis, TV's 'That 70's Show,' "Forgetting Sarah Marshall"), a replacement dancer from San Francisco whose effortless if imperfect style is admired by Thomas. This makes Nina very anxious. On the flip side is prima ballerina Beth Macintyre (Winona Ryder), Thomas's 'little princess' whom he is forcing into retirement. Nina feels pity, admiration and a bit of hero worship, but Beth is as suspicious and hostile to Nina as Nina will sometimes be towards Lily. Aronofsky dealt more with the physical impact on the body in "The Wrestler," and while "Black Swan" doesn't shirk expressing the painful demands on a dancer, this time it's more about the mind. Nina is an extremely dedicated dancer, but she's full of self doubt, something which Thomas uses to goad her on. She's also very unworldly due to her upbringing (check out that bedroom of hers, full of mirrors, pink butterfly wallpaper, stuffed animals and musical jewelry box, the room of a 10 year-old), still calling her mother 'Mommy,' so Thomas uses sex to provoke her as well. Then there's Lily, a seemingly friendly girl who parties like a wild child and tries to draw Nina out. But is she friend or enemy? The filmmaker uses all kinds of devices to get us inside of Nina's head. She's constantly seeing flashes of herself where Lily should be. Her mother's always on her case about a scratching habit that seems to have erupted on her shoulder blades, where wings would grow. Hangnails are a constant, nasty torment (yes, indeed!). Constant real life vomiting is paralleled with blood. When Beth gets into a horrible accident, Nina visits her at the hospital and sees injuries under her blanket like something out of Cronenberg. Eyes turn otherworldly like the flashes of demons in "Devil's Advocate." The film is a technical and artistic stunner, from delirious production design (a print like a Rorschach blot and a sculpture like a bear trap in Thomas's apartment, the black curlicues that envelop Nina's head on her pillowcase, those color signals) to the glorious music. Cinematographer Matthew Libatique ("Requiem for a Dream," "The Fountain") showcases the dance as beautifully as Nina's inner world without being caught in one of the film's many, many reflective surfaces and Andrew Weisblum ("Snake Eyes," "The Wrestler") edits with the horrific effect in mind. Portman, whose performance is receiving all kinds of Oscar talk, does an amazing job physically, but emotionally she spends the entire film being fearful and meek. Much of her mental breakdown is accomplished by costume, makeup, editing and art direction. It's a really, really good performance, especially considering her commitment to the ballet's demands, but I got a whole lot of more jazz out of Mila Kunis's work, which really keeps the audience guessing. Hershey also wavers between light and dark in an interesting way. "Black Swan" is an artistic head trip that travels from the ballet stage to dingy back alleys. It's a classic dance film cloaked within the tortures of an obsessive, disintegrating psyche, but Portman doesn't grab us emotionally jumping into adulthood the way Rourke captivated trying to hang onto his youth. "Black Swan" is ever so admirable, if a bit chilly.