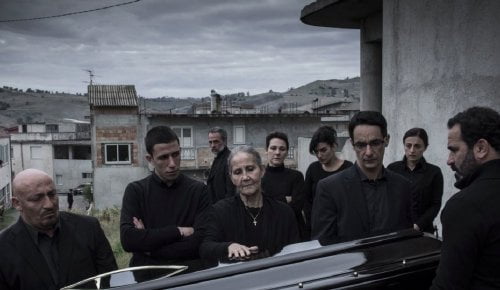 Luciano (Fabrizio Ferracabe) owns a successful farm in the Calabria region of southern Italy. His brothers, Luigi (Marco Leonardi) and Rocco (Peppino Mazzotta), are highly placed in the local crime world. Luciano’s son, Leo (Giuseppe Fumo), wants nothing to do with harvesting wheat or herding goats and heads into the city to ask Uncle Luigi to give him a job in his Mafia organization, beginning a series of events that will end in tragedy for these “Black Souls.”

This is a family drama akin, in many ways, to “The Godfather.” “Black Souls” is about three brothers. Luciano, the farmer, represents the honest civilian life where a man can make a successful living for his family in peace, especially his teenaged son. Luigi and Rocco do not follow their brother’s sentiments and they ply their criminal trade with enthusiasm. There is a shaky peace in the still-feudal criminal world in Italy’s south. That peace is turned asunder by a childish act by Leo. Angry at a local bar owner, he shoots up the man’s place before he splits for the city. This adolescent behavior is not treated as childish and the head of the clan that protects the bar owner demands an apology from Leo. What unfolds is a story of vendetta and long ago insults that will unleash a war between Mafia families that will escalate into murder. Director and co-writer Francesco Munzi (with Maurizio Braucci and Fabrizio Ruggirello) adapt the 2008 novel of the same name by Gioacchino Criaco. One impressive aspect of the adaptation is how the filmmakers take the large ensemble cast and give all of the players distinct character so the viewer can keep up with the whirlwind of action and violence without confusion. The look of the film, too, with its dark, blue hues, lends to its sinister moodiness. “Black Souls” is most definitely and Italian Mafia film with the accent on “Italian.” It brings us into a sinister underworld that is a throwback to near medieval times where the criminal lords were also societal in their power. Here, though, there is no honor among its thieves.