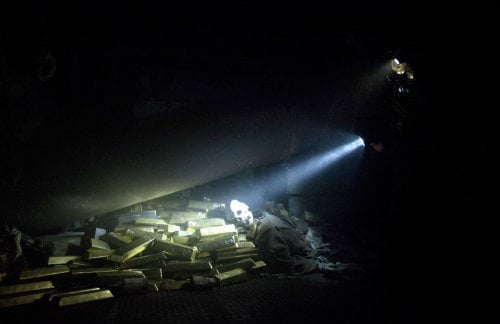 Thirty years of captaining a submarine has cost Robinson (Jude Law) his family. Losing his job with a salvage company has really set him adrift. When American Daniels (Scoot McNairy, "Argo") comes up with funding for a Nazi treasure hunt, Robinson pulls together a rag tag crew of Englishmen and Russians in a questionable Russian sub to travel deep into the depths of the "Black Sea."

Screenwriter Dennis Kelly turns to the old Nazi-sub-full-of-gold chestnut for a thriller that resembles an underwater "The Treasure of the Sierra Madre" with a dollop of "The Caine Mutiny" and an underlying theme of fathers and sons. Director Kevin Macdonald ("The Last King of Scotland," "The Eagle") rachets up the tension throughout (this movie could set off panic attacks!), using the claustrophobic set, red lighting and the 'cold dark death' that potentially awaits these men. As former colleagues marvel that Robinson, of all people, was let go by the salvage company, Robinson hears an intriguing tale from Kurston (Daniel Ryan), who tells him they'd located the legendary Nazi sub on a Georgian ridge but that politics were holding up a salvage mission. Wanting to both stick it to his old employer plus get what he sees as his due (his wife has remarried a wealthy man, increasing the chip on his shoulder), Robinson decides he needs a crew that's half British, half Russian, as they'll be sailing a Russian sub. Then he has an unusual visit from a down-on-his-luck seventeen year-old, Tobin (Bobby Schofield), who comes to tell him Kurston committed suicide and to say he was sorry. Seeing something of himself in this kid and missing his own 12 year-old boy, Robinson recruits the inexperienced teen to take Kurston's place. Tobin's inclusion makes for some pranking hilarity as the crew sets out on their rusty Russian ship (the lad's tasked with window washing and chimney cleaning), but it also puts the Russians on edge, believing that a 'virgin' on board is bad luck. On the Brit side, Robinson's fearless deep sea diver Fraser (Ben Mendelsohn, "Animal Kingdom," "Exodus: Gods and Kings," togged out like Keith Richards), known to be a loose canon, resents the even divide of the prospective haul given the gold's stronger buying power on Russian soil. When a Russian ship passes overhead, Daniels notes the tension when they're clear, but the true tension comes from the crew's group dynamics. A catastrophic clash in the engine room downs the sub and Robinson must fight to keep both sides of his crew focused on their survival as an undersea expedition is sent to see if the Nazi sub is indeed near and if its drive shaft can be used to repair their own vessel. And that's just for starters. Kelly makes sure to cross off some obvious survival routes early on, and as one close call dissolves into another and the crew and its skill sets grows ever smaller, the willingness to take risks vs. ensuring safety make the men begin to question their captain. Then yet another revelation is lobbed into the mix. Law, sporting a Scottish accent, is a strong lead for a strong ensemble, keeping us guessing just how far he'll go to get his gold (the gold sickness on display here would do J.R.R. Tolkein proud). Newcomer Schofield is a sympathetic foil as he tries to fit in, revealing himself as an expectant father. The terrific ensemble also includes "Kill List's" Michael Smiley, "Nowhere Boy's" David Threlfall, "Night Watch's" Konstantin Khabenskiy and "A Most Wanted Man's" Grigory Dobrygin. Jodie Whittaker ("Attack the Block") appears in Robinson's reveries as his ex-wife Chrissy. "Black Sea" is an unrelenting, high stakes adventure yarn with a curiously satisfying finale. After "Dom Hemingway" and now this, former golden boy Law appears to be remaking himself as a compromised, macho working class hero. Grade: