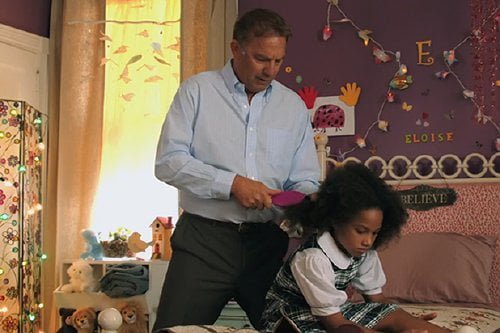 Elliot Anderson (Kevin Costner) grieves the recent loss of his wife, Carol, by way of the bottle, but still must take care of his granddaughter, Eloise (Jillian Estell).But, her paternal grandmother, Rowena Jeffers (Octavia Spencer), has different plans and is seeking custody of the girl. This sets the stage for the battle that will decide whether Eloise will live in a world that is “Black or White.”

Elliot Anderson (Kevin Costner) and his wife have been raising their deceased daughter's biracial daughter Eloise (Jillian Estell) in a home full of love and middle class wealth, but when he loses his wife Elliot begins to struggle, drowning his grief in Scotch. This is the moment the girl's paternal grandmother Rowena (Octavia Spencer, "The Help," "Snowpiercer") from South Central seizes to get custody with the help of her attorney son Jeremiah (Anthony Mackie, "The Hurt Locker"), who brandishes the race card as his argument. The two grandparents both have the best intentions, but their fears of the unknown keep each from seeing things are not "Black or White." Writer/director Mike Binder ("Reign Over Me "), who based his script on personal experience with an orphaned nephew, gave his friend Costner a much needed career boost with his role in 2005's "The Upside of Anger," and Costner's never been better than he is here. But although Binder's hit on a complex, current issue and surefire conversation starter, he's wrapped his film in cloying Hallmark sentiment with a cutesy score (Terence Blanchard, "Red Tails") that undermines much of what he's trying to achieve. A fine cast helps, but "Black or White" needed a lot more edge to really put it across. Elliot believes Eloise is more protected in his world, and, indeed, the little girl is perfectly content living in his big colonial, given an educational leg up with the black tutor, Duvan (Mpho Koaho, TNT's 'Falling Skies'). Rowena, a self-made businesswoman, thinks the girl should be raised in her Black, more female-centric environment. Things get even more complicated when the girl's troubled, drug-addicted dad Reggie (Andre Holland, Showtime's 'The Knick,' "Selma") shows up, offering cash for custody to Elliot. Despite his anger at the man who ruined his daughter's life, Elliot tries to do the right thing, just as Rowena flinches at Jeremiah's tactics. Maybe Binder was just too close to his subject, a worthy and relevant one he attempts to handle with a minimal amount of political correctness, but "Black or White" is an artless, movie-of-the-week. Grade:

This is the second film that Kevin Costner and writer/director Mike Binder. Their first, “The Upside of Anger (2005),” is considered by some the re-launch of the star’s career. This time around, though, Costner also acts as producer and put up the money to allow “Black or White” to be completed. The finished product is more soap opera than drama, though the film's stars flesh out their characters more than does the writing. The story pits white grandpa Elliot against black grandma Rowena. The contrasts are distinct with Elliot promising a well-off though solitary life for Eloise while Rowena has the rambunctious and lively extended family to offer. But there is Elliot’s drinking to contend with and Rowena will use that to help her win custody of Eloise, though Binder keeps you guessing (sort of) how things will turn up. Throw into this mix Eloise’s father Reggie (Andre Holland), a junkie who was responsible for Eliot’s daughter’s death, and the soap factor ramps up. The caliber of the acting by Costner, Spencer and Anthony Mackie as Rowena’s son, and lawyer who is representing his mother’s case for custody of the Eloise, is better than the script deserves. They give depth in their thinly drawn characters, making “Black or White” a better film than it should be.