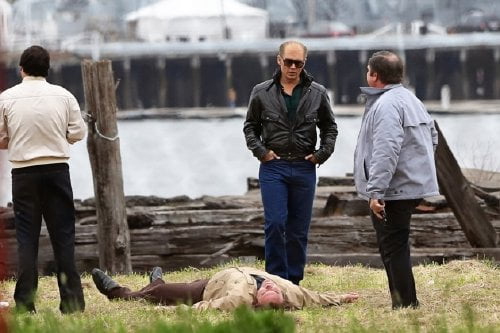 John Connelly (Joel Edgerton) and James J. “Whitey” Bulger knew each other from the streets of South Boston in the 50s and 60s. Years later, John became a prominent FBI agent in the Boston office and Jimmy Bulger rose to the heights of the city’s notorious Irish Winter Hill Gang. They meet again, this time on different sides of the law and an alliance would form that will have repercussions that will resonate for years in “Black Mass.”

When they were kids in South Boston, Jimmy 'Whitey' Bulger rescued John Connolly from a playground bully. Years later, Connolly (Joel Edgerton, "The Gift") became an F.B.I. agent who saw his former savior, now the head of the criminal Winter Hill gang, as the perfect guy to sidle up to in order to take down their common enemy, the North End's Italian Mafia. Connolly's star struck ambition blinded him to his own collusion in Whitey's crimes, including murder, as Bulger became the F.B.I.'s most wanted, a circular, ironic "Black Mass." If you don't count his vocal performance in "Rango" or his cameo in "21 Jump Street," you have to look all the way back to 2009's "Public Enemies" to find a credible performance from Johnny Depp, the actor having lost his way in his makeup and dress up toy chest. While heavy makeup is still a factor here, Depp's Bulger is the strongest work we've seen from the actor in decades. Director Scott Cooper ("Crazy Heart," "Out of the Furnace"), working with Mark Mallouk and Jez Butterworth's ("Edge of Tomorrow," "Get On Up") adaptation of the book by the Boston Globe reporters who broke the case, hews closely to the facts (some characters are composited, others, like Sienna Miller's Catherine Greig cut), even shooting scenes at actual Bulger murder sites. It's a mind boggling story, one in which a petty criminal built an empire by playing the F.B.I during the same years his brother Billy (Benedict Cumberbatch, phenomenal) was president of the Massachusetts State Senate. Cooper finds his way in via Whitey's soldiers, all of whom copped deals for their testimony (and whose word provide the facts of the case, many disputed by Bulger). With his first tip of the hat to "Goodfellas," the film opens with Kevin Weeks (Jesse Plemons, "Paul," "The Homesman") talking about gaining Whitey's trust by beating Italian mobster Joey Angiulo. 'Just like that, I was Winter Hill.' The scene is brutal, but Cooper counters by illustrating why many in Southie loved Whitey, the man stopping his car to talk to an old woman from the neighborhood, tasking Kevin and Steve Flemmi (Rory Cochrane, "Argo") with getting her groceries into the house. Connolly approaches Billy Bulger, who took pains to separate himself from his brother publicly while still maintaining family ties privately, to get to Whitey and although Billy rejects the proposal, he mention's John's visit almost as an aside. Jimmy agrees to meet with John, but reacts strongly against the notion of being 'a rat,' at least until John points out the common enemy angle. He confides in Flemmi, arguing that the relationship is 'business' not informing, and indeed it is, Whitey using his connection to cover his activity while providing next to nothing (his biggest reveal is the address of Anguilo headquarters, a coup Connolly rides on for years). Connolly's suspicious but laid back Special Agent in Charge Charles McGuire (Kevin Bacon) is replaced by the hard driving Fred Wyshak (Corey Stoll, FX's 'The Strain') right around the time Brian Halloran (Peter Sarsgaard, "Pawn Sacrifice," twitchy and desperate) tries to inform on Whitey's Tulsa hit on Jai Alai owner Roger Wheeler (David De Beck, "The Company Men") - to Connolly - and ends up dead. Connolly's painted himself into a corner. Depp, unfortunately outfitted with blue contacts which are thoroughly unnatural looking, otherwise looks and sounds a lot like Bulger, right down to the man's trim and erect carriage and a Boston accent modeled on Aerosmith guitarist Joe Perry's. He sports a sly smile, one which can at turns can be genuine or deadly, as evidenced in another of Cooper's "Goodfellas" lifts when the man threatens Connolly's associate John Morris (David Harbour, "End of Watch") over the divulgence of a secret family recipe, then laughs it off. Edgerton is not Depp's equal here, the actor's brash double talk often playing like dim wittedness instead of chutzpah, but along with the script and his director, he does convince of the insidiousness of his corruption, the vicarious high of hanging with infamous criminals. Cumberbatch is outstanding as Billy, the English actor nailing the mix of Southie and higher education, a finely tuned depiction of a Boston Irish pol (too bad the scene where he confronts his brother's 'win' of a $14 million state lottery is so abbreviated we only get a glimpse of his comical astonishment - the film was shaved down from a 3 hour running time for pacing). Plemons adds solid local color as Weeks while W. Earl Brown ("Draft Day") is silently lethal as hit man Johnny Martorano. But Cochrane is so downtrodden as Steve 'the Rifleman' Flemmi he almost comes across as a victim, especially after Whitey murders his stepdaughter prostitute/sometime lover Deborah Hussey (Juno Temple, "Maleficent," too naively innocent). "50 Shades of Grey's" Dakota Johnson represents Whitey's women as the mother of his child, held up as a paragon until son Douglas's (Luke Ryan, "The Equalizer") fate damns her. Mary Klug is memorable in the small but important role of Jimmy and Billy's blue collar mom, but it is Massachusetts native Julianne Nicholson ("August: Osage County") who proves the most clear-eyed observer when she challenges husband Connolly on his morphing persona, enduring a terrifying sick bed visit for John's misguided hospitality. The production is steeped in Boston flavor, from area locations like Boston City Hall and the streets of Southie through costuming and interior set decoration. Cambridge's Polish American Club ably stands in for Bulger's Southie bar Triple O's (even Miami scenes are credibly subbed). "Black Mass" is a beautifully structured breakdown of a complex tale of dishonor among thieves and corrupting ambition. Grade:

The reason that everyone is eager to see director Scott Cooper’s telling of the story (adapted by Mark Mallouk and Jez Butterworth from the book by Dick Lehr and Gerard Oneill) of the rise and fall of Boston mob boss, Whitey Bulger, is to see Johnny Depp’s interpretation of the man. Depp immerses himself in the role, obviously doing his homework, and the result is a terrifying portrayal of a man who is a cold blooded killer, drug dealer, racketeer, family man, loving father and son and a kind of a Robin Hood in the neighborhood where he lived. Depp embodies all of the traits and foible, giving James J. Bulger full dimensional and showing a frightening and deadly persona. Most of us, at least here in Boston, are very familiar with Whitey Bulger and the Winter Hill Gang. (I grew up only blocks away from the bar where they hung out). To many, he was a kind of folk hero who happened to be on the wrong side of the law. That changed with Bulger’s arrests and his imprisonment in several Federal jails, including Alcatraz and Leavenworth prisons. “Black Mass” picks up Whitey Bolger’s story in the 1970’s as he agrees to not be an informer but ally with the FBI, with longtime friend John Connelly as his handler. The film chronicles Bulger and the Winter Hill Gang exploits as they assist the FBI in ridding the city and the region from the hold of the Italian Patriarca crime family. They succeed in taking down Patriarca lieutenant Gennaro “Jerry” Angiulo and eliminate the Mafia hold in Boston. But, as the film shows, the FBI made a deal with the Devil and unleashed a crime wave over the city under the control of the Irish Mob. “Black Mass” has much going on with its many characters and many years of story. While Depp is the main attraction, it is the remarkable story populated by an all star cast that includes Benedict Cumberbatch, Kevin Bacon, Peter Sarsgaard, Rory Cochrane, Juno Temple and more that make the film worthwhile. These roles are big and small and often very good. One complaint is Cochrane as Steve “The Rifleman” Flemmi, Whitey’s lieutenant and right hand man. The actor does not show the dead-eyed ruthlessness of the criminal and, instead, seems weak and unfocused. The production puts its estimated $65 million up on the screen in its period depiction of Boston and other locales as the story spans decades. (To me, it is always a pleasure to see vintage cars, locations and costumes that accurately show the times. Also, the Bay State locations are a treat to see for all of us Bostonians.) “Black Mass” is also a good companion piece to last year’s documentary, “Whitey: The United States of America versus James J. Bulger” by Joey Berlinger.” – that film covers the same period and shows the accuracy of information used to make Cooper’s fictional account of the events of the day.