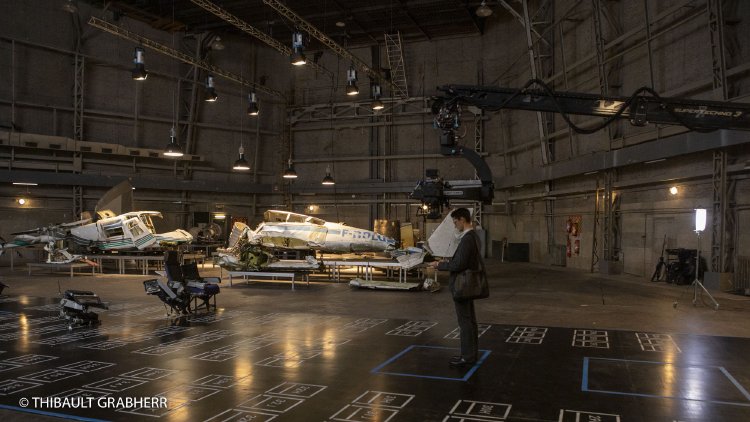 When Mathieu Vasseur’s (Pierre Niney, "Yves Saint Laurent") eyesight prevented him from becoming a pilot, his extraordinarily sensitive hearing became an asset for France’s aeronautics safety bureau, the BEA.  But after he challenges his boss Victor Pollock’s (Olivier Rabourdin, "Taken") assessment of a helicopter crash, he finds himself sidelined when a new Atrian 800 crashes, killing all 316 on board.  Then Pollock disappears and bureau chief Philippe Rénier (André Dussollier, "Wild Grass")            puts him in charge of what begins to look like a cover-up involving even his wife Noémie (Lou de Laâge, "The Innocents") as Mathieu analyzes the “Black Box.”

It is astonishing that this film, nominated for five César awards, didn’t at least win for its meticulous sound design (that went to “Annette”!) as this is an aurally based conspiracy thriller akin to Brian De Palma’s “Blow Out.”  Cowriter (with Simon Moutairou and Nicolas Bouvet)/director Yann Gozlan may take his thriller one red herring too far, but overall this is a tense drama about an obsessed investigator who just may have stepped over the line into paranoia.

The film begins with a tracking shot that takes us from the cockpit of doomed Flight EA0184 where a flight attendant is asking if they’d like breakfast, back through First Class, diverting to an onboard flight progress screen before continuing through economy and into the plane’s nether regions where the CVR is capturing that cockpit conversation.  Then the recording goes haywire, and a slick bit of editing deposits us in front of the screen where Mathieu is looking at sound waves while registering a 50 Hz difference in engine noise using his ear alone.  But this isn’t a black box recording.  It is an iPhone recording of that disputed helicopter crash.

Mathieu’s keen technical abilities have labeled him both an expert and someone who maybe over analyzes.  As played with intense focus by Niney, Mathieu may be on the spectrum.  Noémie, who has just left BEA to take a job with Atrian, gently reminds him that diplomacy is also valued along with skill, advice we see ignored when he recreates an accident with pilot Alain Roussin (Grégori Derangère, "Bon Voyage") in a simulator and declares it pilot error, something which will come back to haunt him.

Manipulating the corrupted section of the Atrian 800’s recording, Mathieu hears ‘Allahu Akbar,’ and, rushed into a press conference by Rénier, concludes that someone can be heard entering the cockpit after the flight attendant, someone whose footsteps can be heard approaching from the pilot’s lavatory, a place the attendant is supposed to check before buzzing in to the cockpit.  A female journalist pushes him on that assumption as an ‘easy out,’ but he rebuffs her inquiry.  Then he’s contacted by a survivor’s spouse with a recording of a phone call from his wife that happened 3 minutes after the crash.  Balsan (Guillaume Marquet, "Love Crime"), the man Pollock chose to replace him on the investigation, tells him that Pollock stayed an additional two hours after he left when they initially listened to the CVR and Mathieu begins to look into Pollack’s disappearance, finding incriminating evidence on Pollack’s car’s dash cam which leads him to steal a confidential file off his wife’s laptop.  But it will be a coincidental outing with his nephew at a point when everyone seems to have turned against him that will give Mathieu his biggest clue.

Gozlan weaves back and forth between Mathieu’s personal life and his life with BEA and its dealings with the CEOs of Atrian, Claude Varins (Aurélien Recoing, "Time Out"), and its security firm run by Xavier Renaud (Sébastien Pouderoux, " C'est la vie!").  Editor Valentin Féron balances on screen data with the larger vistas of parking lots, Pollock’s rural home and the hanger where the crashed plane is being reassembled (the latter scene, in which Mathieu imagines himself as the terrorist in seat 45F, showcases how poorly its counterpart in “Patriots Day” about the Boston marathon bombing was handled).  Cinematographer Pierre Cottereau gives the whole a cool blue gray palette.   Philippe Rombi's César nominated score propels the film mixing piano and strings with unusual instruments, paying homage to Bernard Herrmann in the film’s last act.

“Black Box” is riveting entertainment, a welcome commercial throwback to films like “The Parallax View” and “The Conversation.”  Given the recent Boeing 737 scandal, its subject is timely and it fills a niche, making it ripe for an American remake.

When a brand new airliner crashes, killing hundreds, ace air disaster specialist, Mathieu Vasseur (Pierre Niney), is not brought into the investigation. Soon, the accident is blamed on human error but something does not sit quite right with Mathieu when he finally examines the “Black Box.”

As I watched director Yann Gozlan’s tale of an air disaster investigation, I thought, “This is right up my alley.” After all, I have become an avid viewer of the Smithsonian Channel’s long-running “Air Disaster” series and, like many viewers, I am fascinated with the complexity of air crash investigations. And, boy, does Gozlan put you right into the heart of the analysis of the crash of a brand new aircraft.

The filmmakers borrow liberally from real life air disasters, at least as a starting point for the story. Remember, just a few years ago, when Boeing had its horrific scandal over the 737-MAX? That turned out to be a software “fix” that they neglected to inform the FAA and the airlines about, and it caught them. Hundred died because of the “oversight.”

Here, the screenplay, by Gozlan and Nicolas Bouvet-Levard, uses real life crash investigation and twists it around to tell a story of conspiracy, corruption and corporate greed. Mathieu is the center of “Black Box” as it begins with the fateful crash of the brand new jet. He is the logical choice to lead the investigation but his boss, Victor Pollock (Olivier Rabourdin), takes command and, soon, the report comes out blaming human error. This does not seem quite right to Mathieu when he is allowed to enter the investigation after Pollock disappears.

This is when the film gets into the stuff that techno-geek in me loves to watch: the nuts and bolts of figuring out why a perfectly sound aircraft would suddenly crashed. The conspiracy and corporate intrigue associated with that crash is the meat and potatoes of “Black Box” as the investigation and all its tendrils of corporate corruption play out.

For me, this is a fascinating look into a crash investigation and all of the hard work it entails. That we are also presented with a good mystery, too, is a big plus.