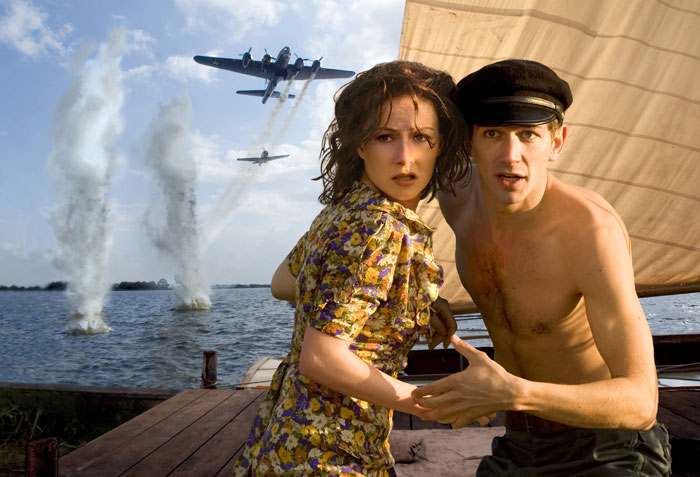 When Dutch Jew Rachel (Carice van Houten) is flushed out of her hiding place she appeals to her family's lawyer for the cash they'd entrusted him to cross the border into Belgium. He delivers both the cash and the rest of her family, but only Rachel survives when an entire boatload of wealthy Jews are betrayed by a chain of people who will be identified after the war ends in a small "Black Book."

Cowriter (with Gerard Soeteman, "The 4th Man")/director Paul Verhoeven ("Spetters," "Showgirls") returns to his Dutch roots and "Soldier of Orange" screenwriter, but overlong exposure to Hollywood means you can't go home again. "Black Book" is certainly pulpy entertainment but it plays like Sidney Sheldon's "Army of Shadows." Dutch underground leader Gerben Kuipers (Derek de Lint, 2006's "When a Stranger Calls"), gives the newly blond Rachel a job, renames her Ellis, then asks is she's willing to take on a life-threatening job. Determined to avenge the slaughter of her family by the Nazis, Ellis agrees and accompanies the amorous Hans Akkermans (Thom Hoffman, "Orlando," "Dogville") on a train trip to smuggle equipment. When they are suddenly put in danger of being found out, Ellis thinks on her feet and ensconces herself and their baggage in a compartment with handsome Nazi officer Ludwig Müntze (Sebastian Koch, "The Lives of Others"), using her feminine wiles to attain his protection. Kuipers asks Ellis is she is 'willing to do what it takes' in order to procure the release of his son and other resistance members recently rounded up and she has no problem securing a spot in Müntze's office and his bed. There is something to be said about a WWII film ostensibly about the class infighting between resistance fighters and Jews whose most sympathetic characters are a Nazi and a slutty opportunist (Halina Reijn, "Zus & Zo," "Grimm," fabulous as Ronnie). Carice van Houten has her moments as Ellis, most notably when she recognizes the pianist accompanying her at an office reception for the man who shot her parents, but on the whole there is little about her to suggest suffering or a Jewish background and a lot about her that screams sexpot. She's set in the middle of a half-hearted love triangle with Akkermans, who lusts after her (particularly while he watches her dye the rug to match the curtains!) and abhors her partnership with Müntze, who has clearly tickled her fancy. Müntze, you see, is one of those 'good' Nazis ("The Good German?") who try to negotiate cease fires and who keep their girlfriends' ethnicity under their caps. He's contrasted against the sniveling cliche that is Günther Franken (Waldemar Kobus), an obese pervert who crashes ladies rooms naked. "Black Books's" final, twisty third keeps revealing one betrayal after another right up through an over the top dose of Claus von Bulow-style whacking. The film is bookended by entirely unnecessary and unconvincing scenes of Ronnie finding Ellis, a brunette again, living in an Israeli Kibbutz. The film looks great with its coarse wallowings through decomposing corpses and debauchery all in vibrant color with a score that recalls the work of Bernard Herrmann. Verhoeven's "Black Book" is a hybrid of Tinseltown and his Dutch roots and it wears its pulpy heart on its sleeve.