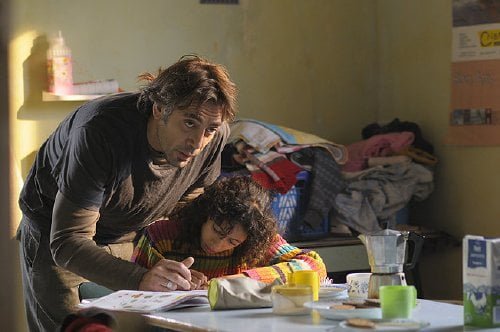 In the Barcelona that tourists rarely see, Uxbal (Javier Bardem, "No Country for Old Men") lives a morally complex life. His ability to hear the dead makes him popular at wakes, but he makes his real living with his brother Tito (Eduard Fernández, "En la ciudad..") as a go-between for Hai (Taisheng Cheng, "The World"), who makes illegal knockoffs of designer handbags and bootlegs of DVDs, and the illegal immigrants from Senegal who sell them. Uxbal has also just discovered he himself is not much longer for this world and is determined to see that his family, daughter Ana (Hanaa Bouchaib) and son Mateo (Guillermo Estrella) and their manic depressive mother Marambra (Argentian newcomer Maricel Álvarez) whom he is separated from, are cared for but life hands him more burdens than he bargained for. Still, along his troubled road, here and there are moments that are "Biutiful."

After his contentious breakup with screenwriter Guillermo Arriaga, cowriter (with Armando Bo and Nicolás Giacobone)/director Alejandro González Iñárritu ("Amores Perros," "Babel") steps up to the plate with his best film since his debut, proving, perhaps, that his talent needed to stretch away from Arriaga's multi-threaded story format. Iñárritu has dealt with death before in "21 Grams," but this film, buoyed by a magnificent performance by Bardem, is full of soul, a spiritual reflection on the human condition. The circular film begins with a literal show of hands, as Uxbal's daughter admires and is given her mother's ring. Uxbal then meets a young man in a snowy forest and shares a cigarette. These scenes will have much deeper meaning at film's close. We then follow Uxbal to the wake of three young boys, where his presence will provoke both gratitude and anger. Death is a shroud around Uxbal and when he visits his doctor, we know the news is bad. Then his brother tells him they must move their father's grave as the land is being sold for a mall. Tito just happens to be entertaining his brother's topless wife while he talks to him. Marambra isn't the only woman who needs Uxbal's help. Liwei (Luo Jin) is a Chinese immigrant who works in Hai's sweatshop and cares for Uxbal's kids along with her own infant. Then there's Igé (Senegalese hairdresser Diaryatou Daff), left behind when her husband Ekweme (Cheikh Ndiaye), Uxbal's friend and worker, is busted by the cops and deported. How their lives entwine with Uxbal's will be both tragic and hopeful. The tragedy is sign posted, but breathtaking when it strikes. Iñárritu's film, which travels through cheap apartments, slums and the ramshackle living quarters of indentured servants, is extremely beautiful. Bardem is often lit like a Rembrandt, and the actor is so fully in the skin of his character he lends dignity to pissing blood even as his physicality makes us cringe in sympathetic pain. There are otherworldly moments, like the moths that gather on a stain on Uxbal's ceiling, symbolizing the dead. A nightclub scene, the one time Uxbal indulges in drink, is surreal, dancers' buttocks dressed up as breasts. But there is also ugliness, like Marambra's apartment, her hazardous refrigerator often sitting in a pool of water, a burned mattress laying on the floor. Álvarez gives a breakout performance as an unfit mother in the downward spiral of untreated bipolar disorder, burning her sexuality from both ends. "Biutiful" (the title comes from the spelling Anna uses on a drawing) joins a recent trend in exploring death and the afterlife ("Hereafter," "Enter the Void") and is the most moving of them all.

Uxbal (Javier Bardem) is a man of two sides, one light, the other dark. He is a strong, loving dad to his kids, Ana (Hanaa Bouchaib) and Mateo (Guillermo Estrella), and tries to be supportive of his ex, Marambra (Maricel (Alvarez), their unstable, alcohol-abusing mom. He is also a criminal, though, overseeing his underground empire, dealing in businesses as diverse as illicit drugs, trafficking in illegal immigrants and a shady construction company. This is about to come to a sudden end when he diagnosed with fast-spreading prostrate cancer and given just a few weeks to live in “Biutiful.” This soulful work by Mexican director Alejandro Gonzalez Inarritu showcases the talented Javier Bardem as a man with a foot in each of two worlds. He is an enigma, caring for his family and spending quality time with his kids and, at the same time, can traffic in people and line his pockets with the money they bring in. But, he shows compassion for the migrant workers, supplying them with heaters to ward of the cold in their unheated shelter. This kindness, though, turns deadly and Uxbal realizes that he has little time to get his affairs in order. Bardem is perfect in the role of Uxbal and the actor is convincing as both a loving dad and a ruthless criminal (with compassion). His sad eyes, three day beard and shaggy hair complete the character he creates in Uxbal. Javier gives one of the best performances of 2010 with his depth and range. The supporting cast is an eclectic collection of European, African and Asian actors and non-actors which help give the film a realistic edge. Cinematographer Rodrigo Prieto lends a gritty quality to the film that befits the overall tone of “Biutiful.” This may be the best that Inarritu has done to date. “Biutiful” is, in its own bleak way, beautiful.