Birdman (or The Unexpected Virtue of Ignorance) 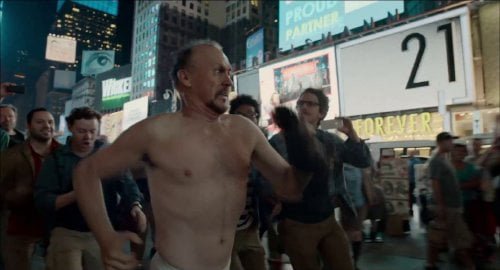 Riggan Thomson (Michael Keaton, "Batman") was once a huge movie star, but his refusal to suit up for the fourth entry in his super-hero franchise has put his career into a tailspin. Desperate to become part of the conversation once again, this time for something more meaningful, Thomson's betting everything on directing and starring in a Broadway adaptation of a Raymond Carver short story, but he can't seem to shake "Birdman."

It's kind of funny that what finally gets Riggan what he's looking for is a stunt in a way. Director Alejandro González Iñárritu ("Amores Perros," "Babel"), who cowrote the script with Armando Bo and his "Biutiful" screenwriters Nicolás Giacobone & Alexander Dinelaris, may be coming from the same place as Riggan but his existential film is more about its technological razzle dazzle than what it has to say. The film's well acted, peopled with identifiable show business types (the insecure actress, the bad boy Method actor, the celebrity ex-wife and abandoned daughter, the power-wielding critic), but despite Iñárritu's intention of getting us inside of Riggan's head by shooting the entire film as if it's a single shot, the device doesn't really serve the story as much as it calls attention to itself. That's not to say "Birdman (or The Unexpected Virtue of Ignorance)" isn't a good film. It's just not the second coming. Iñárritu's (mostly) 'uninterrupted' take (one can deduce where digital effects have been used to splice sequences together when an edit is not obvious - as it is when Riggan enters the St. James Theater through a stage door), while often giddy-making, doesn't add a thing to his film's meaning. What it does do is get the audience caught up in imagining how it's done, how quickly an actor must move from one set to the next so Emmanuel Lubezki's ("Gravity") shot can remain fluid. These continuous shots follow action happening outside of Riggan's space and even traverse time, thoroughly baffling moves for illustrating stream of consciousness. (It is best used to convey a nightmare when Riggan is locked out of the theater between acts, his bathrobe caught in the door.) After an obvious metaphor of a flaming meteor falling from the sky, we meet Riggan, floating in the Lotus position in dingy office. 'We don't belong in this sh*thole' we hear Birdman think, the plural encompassing his alter ego, Riggan. In rehearsal, Riggan's frustration with one of his actors, Ralph (Jeremy Shamos, "Magic in the Moonlight"), brings a stage light crashing down upon the man's head, telekinesis presumably being on of Birdman's super powers. Lesley (Naomi Watts, "21 Grams"), nervous about her own Broadway debut, fields a suggestion - what about her significant other, Broadway bad boy Mike Shiner (Edward Norton, "The Incredible Hulk"), to replace him? Riggan's ego gives pause but best friend/producer Jake (Zach Galifianakis, "The Hangover") is over the moon on the idea, sellouts dancing like sugar plums in his head. Riggan's got all kinds of trouble brewing. Shiner has no compunction about breaking out of character during previews nor stealing Riggan's limelight. The daughter he neglected back in the day is acting as his assistant and Sam (Emma Stone, "The Amazing Spider-Man 2"), fresh out of rehab, is in heavy flirtation with Mike. Mike's behavior is sending Lesley into the arms of costar Laura (Andrea Riseborough, "Oblivion"), Riggan's lover, and Broadway's biggest critic (Lindsay Duncan, "Le Week-end") is gunning for him. Even Birdman thinks they should have gone the reality route. The film is full of meta references - to actors like Michael Fassbender and Jeremy Renner unavailable because of super hero franchises, to French philosopher Roland Barthes, to Spider-Man on Broadway, to the many half masks on display (Phantom of the Paradise is playing across the street) to, of course, Keaton's casting - and it's often quite funny, like when a bystander questions Riggan's motivation for standing on a ledge or the hilariously on point idiocy of a press conference. The film is very rooted in New York City, the yin to Hollywood's yang, and as Riggan heads towards emotional breakdown, we get whiffs of New York based films from "Network" to "Q: the Winged Serpent." Antonio Sanchez's drum score evokes the jazzed beat of the city and propels the fast paced film with insistent energy. It's great to see Keaton with a meaty part and the actor takes us on a personal journey, breaking his character down on the path to self realization. The showiest roles belong to Norton, whose Mike remains sympathetic despite egotistical theatrics and bad behavior because he shades him with vulnerability, and Emma Stone, never better with blunt truths wielded as a defensive shield. Amy Ryan ("Gone Baby Gone") is a calm force as Riggan's ex-wife. The entire cast and crew must be commended for pulling off great feats of memorization and intricate timing. With "Birdman (or the Unexpected Virtue of Ignorance)", Iñárritu displays a flair for comedy and shows off great technical skill but his high wire act always has that carnival barker in the background.