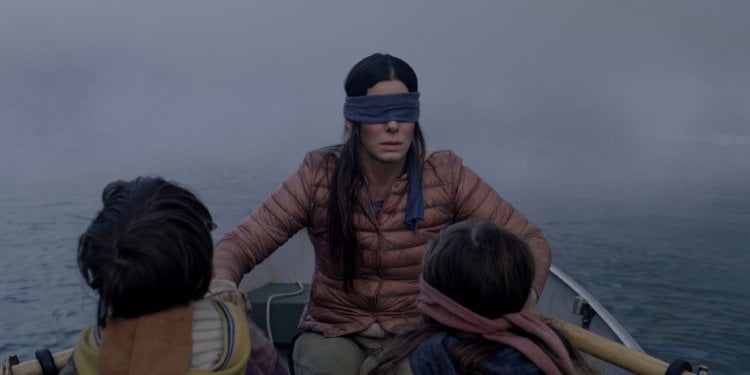 Something has invaded Earth and to simply gaze upon one of these marauding creatures makes the viewer instantly insane and suicidal. Malorie (Sandra Bullock) and two children, to avoid the fate of others, must blindfold themselves and seek sanctuary down river “where you hear the birds” in “Bird Box.”

A blindfolded woman leads two blindfolded children down an embankment towards a boat. Malorie (Sandra Bullock) tells the children that they are about to take a trip that 'will feel like it's going on forever,' that they 'must stay alert,' and that they must 'never remove your blindfolds or I will hurt you. If you see, you die.' They board the boat with supplies and a small box containing live birds. Five years earlier we will see just what has befallen civilization and why Malorie is taking such care of her "Bird Box." Danish director Susanne Bier ("After the Wedding") sets the stage for quite the conceptual thriller, dramatizing an apocalyptic event with such mounting horror Stephen King might grow green with envy. But it is that 'conceptual' part that eventually undoes the film, screenwriter Eric Heisserer's ("Arrival") adaptation of Josh Malerman's novel reading too much like an allegory of Trump resistors and supporters. The film, so effective in its first half and featuring a touching performance from "Patti Cake$'s" Danielle Macdonald, gradually unravels, one ludicrous cliche impossible to take seriously, a pulled punch of a "Sophie's Choice" dilemma a groaner, the ending both implausible and syrupy. Bier crosscuts between the current, river-set timeline ('6 hours on the river,' etc.) and the unfolding of events which set its stage. Five years earlier, Malorie was a heavily pregnant artist, a bit of a loner concerned about her aptitude for motherhood. She gets a lot of support from her sister Jessica (Sarah Paulson) who arrives on the calamitous day to take Malorie for her checkup. They hear ominous news from Europe, where an inexplicable suicide epidemic seems to have taken hold, but by the time Malorie leaves her doctor's office with all good news, the mass madness is on her doorstep, a female patient smashing her head into a glass wall. The streets are utter chaos, then Jessica succumbs while driving. Malorie manages to climb out of the vehicle and is saved by a brave woman who leaves her house despite her husband's calls to stop. She is taken too. That husband, Douglas (John Malkovich), is resentful of the woman who cost his wife her life, but he's not the only personality Malorie will now have to deal with, the Arts and Crafts home owned by generous Greg (BD Wong) now a refuge for a disparate group. There is the cautious Cheryl (Jacki Weaver), the younger Lucy (Rosa Salazar) who quickly hooks up with Felix (Machine Gun Kelly) for some 'end of the world' hedonism, the sweet grocery store manager Charlie (Lil Rel Howery) and another pregnant woman, the naive Olympia (Danielle Macdonald). There is also the quietly brave and sensitive Tom (Trevante Rhodes) who the usually closed off Malorie finds herself opening up to. They quickly realize that whatever is out there infects people by merely seeing it, but although they adapt to their circumstances, the group is depleted one by one. A new twist to the story arrives with Gary (Tom Hollander), a stranger let into the home by the soft-hearted Olympia, but one whose eyes signal trouble to us. There is another reaction to the thing that has devastated the world, those who are not only happy to see it and survive, but who are hell bent on opening everyone else's eyes. As the past catches up to that harrowing river expedition, we learn how Malorie ended up alone, shepherding Boy (Julian Edwards) and Girl (Vivien Lyra Blair), but her personal journey's been tripped up so often with dubious filmmaking choices, there is no satisfaction in her accomplishment. Grade:

Earlier this year, John Krasinski made his directing debut with his near silent “A Quiet Place,” where alien predators hunt by sound. Director Susanne Bier and screenwriter Eric Heisserer, adapting the novel by Josh Malerman, also use one of the five senses (or, lack thereof) to build a suspense/horror/monster movie that kept me interested and involved to its hopeful ending. The story flashes back and forth between now and then - Malorie’s present day as she struggles to survive, without use of sight, with her two young wards - dubbed, simply, “boy” and “girl” (Julian Edwards and Viviene Lyra Blair) - and the time when the world went mad, putting her in her current predicament. At first, I thought the blind idea of the story would be a tough one to pull off and maintain for two hours. The filmmakers, both cast and crew, pay attention to the details of traversing a wilderness while blindfolded and use the inherent feeling of claustrophobia to involve me, the viewer, in Malorie’s fight for survival. The combination of good acting, by Sandra Bullock, and plausible plot lines – be kind, it is a suspense/horror/monster movie - and good background characters (not stick figures) makes “Bird Box” better than it ought to be.