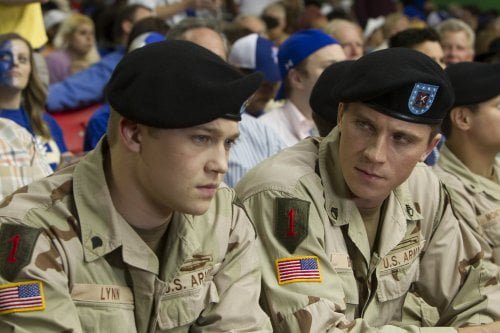 Bravo squad has survived its last combat tour, but with the loss of their Sergeant Breem (Vin Diesel), who died in the arms of Specialist Billy Lynn (Joe Alwyn). The unit, as a reward, is sent by the Defense Department on a two-week victory tour, culminating in “Billy Lynn’s Long Halftime Walk.”

It's Thanksgiving Day 2006 and the Bravo Squad has returned from Iraq for a victory tour after the heroic Battle of Al-Ansakar Canal. They are accompanied by Hollywood producer Albert (Chris Tucker, "Rush Hour"), who is trying to package a deal that may net each of them $100,000. But today, as they prepare to participate in the show at Lone Star stadium with Destiny's Child, their 19 year-old Silver Star winner will encounter the warped perspectives of everyone from professional football players to roadies and team owner Norman Oglesby (Steve Martin) during "Billy Lynn's Long Halftime Walk." Ang Lee's latest is being heralded as a filmmaking breakthrough, the first film to be shot at 120 fps (frames per second) 4K 3D by cinematographer John Toll ("Braveheart," "Iron Man 3"). But only two U.S. theaters will be able to show the film in this format. Most, like myself, will see it in 24 fps. The film certainly is technically impressive, sharp as a diamond, but its story, adapted by Jean-Christophe Castelli from Ben Fountain's book, is oddly flat, only a few characters really coming to life. We meet Bravo Squad boarding the Hummer limo which will take them to Lone Star Dome. They're excited, Albert telling them that Hillary Swank, who won an Oscar for her transgender role in "Boys Don't Cry," is interested in playing Billy (newcomer Joe Alwyn)! Lee uses a series of flashbacks to fill us in on Billy's history, the first of which goes back only a day or two when he was able to visit his family. It is here we learn that Billy only enlisted to avoid jail time for assaulting his sister Kathryn's (Kristen Stewart) ex-fiance when the man ditched her after a horrific car accident that's left her badly scarred. Kathyrn believes Billy has done his duty and is adamant he should not return to Iraq. Back at the stadium, the boys engage in a press conference where they state their biggest takeaway from Al-Ansakar was the loss of their beloved Sergeant Shroom (Vin Diesel). Billy makes significant eye contact with a cheerleader, connecting so strongly with Faison (Makenzie Leigh, "James White") after the press break up, Sergeant Dime (Garrett Hedlund, "Unbroken," "Pan") tells him he 'looks like he just got laid,' when he joins his squad in the stands. They are thanked for their service during Oglesby's Thanksgiving banquet spread. But their disconnect from the citizens who are feting them begins when they meet the players, who ask insensitive questions about their weaponry and what it feels like to kill someone. Things really start to go south as the boys are led backstage for the big show. They get into a physical scuffle with roadies and are given scant direction. As Billy ascends the stairs from behind the band, his face projected on the Jumbotron, the fireworks bring him back to the day Shroom, their Zen leader, died in his arms after incredible bravery. With the show over, no one comes to assist them. Oglesby lowballs them at $5,500 for each man to produce the movie of their lives. Faison wants Billy as her fantasized hero in Iraq, not the man who considers running away with her. Alwyn looks the part of the heroic soldier whose point of view we follow as he comes to the conclusion that his brothers in arms are the only ones who will ever understand him, but Billy Lynn's character comes more to life in the reactions of his superiors. Vin Diesel has never been better as the calm commander who leads his men by example. Hedlund's Dime is seen initially doubting Lynn, but comes around after the teenager endangers himself to get to fallen Shroom's side. Hedlund's gruff manner (he resists joining in his squad's profession of love for each other with razor sharp quips) provides some of the film's lighter moments. The rest of the squad is more of a single, gangly organism, Arturo Castro's Mango the only real standout. When all is said and done "Billy Lynn's Long Halftime Walk" does make its point, but the film itself quickly fades from the memory. We're left wondering just why those roadies felt compelled to jump Bravo as they make the depart the stadium and why every football player is such as clueless clod. The film is at its most involving at the Battle of Al-Ansakar, the mini war film in the midst of sports spectacle. Grade:

2006. Bravo squad has survived its latest combat tour in Iraq, but for the loss of their revered Sergeant Breeme (Vin Diesel), who died in the arms of Specialist Billy Lynn (Joe Alwyn) during their last, heroic battle. The unit, as a reward, is sent by the Defense Department on a two-week victory tour across the US, culminating at the Dallas Cowboys’ Thanksgiving Day game in “Billy Lynn’s Long Halftime Walk.” Ang Lee’s latest film centers on the title character, Billy, played by newcomer Joe Alwyn, following the pitched battle with Iraqi rebels that ended with Billy’s singular act of selfless heroism. The story, adapted from the Ben Fountain novel by Jean-Christophe Castelli, is divided equally between Bravo squad participating in the aforementioned halftime show and the event that resulted in their return home. “Billy Lynn” works best in the flashbacks to the harrowing and deadly battle that earned Billy a Silver Star and the Bravo squad a unit commendation. The men a herded around by their tour manager, Albert (Chris Tucker), who promises the Bravo soldiers a lucrative Hollywood contract for their story. The action begins with the end of the tour and the big Dallas Cowboys Halftime Show as seen through Billy’s young/old eyes. The men are inundated with the sheer force of spectacle, contrasted by the flashbacks to battle and the brotherhood of warriors. Bravo squad, during their so-called victory tour, must face a homecoming where the American people have little clue of the sacrifice their warriors sent into harm’s way must face. This is exemplified, several times during halftime day, with pointed questions from the “adoring” citizens about what it is like to kill a man in hand to hand combat or how it feels to lose their beloved squad leader, Breeme. This, of course, causes the Bravo soldiers to band together, especially when assaulted during the show by belligerent roadies. These callous behaviors by the citizens rang false to me with its blatant lack of respect for the warriors – behavior that neither I nor anyone that I know would have even thought, then and now. Joe Alwyn plays Billy Lynn, and the members of Bravo team their characters, as strangers in a now strange land. The men have lived their lives every day, side by side and watching each others’ backs in a hostile environment. When Lee returns, in flashback, to the fateful last firefight, it is to show the brotherhood and loyalty of the men toward each other – not the country where they volunteered to put their lives on the line. This is made manifold with their return to the States and their oft hostile treatment by those they supposedly fighting for. The numerous cast members, especially those on team Bravo, are not all given the chance to become three-dimensional characters. Alwyn is central focus in “Billy Lynn” and the certain members of the squad are given good shrift, allowing the fleshing out of characters such as Staff Sergeant David Dime (Garrett Hedlund), who had to assume the squad leader role once held by Breeme, taking on the role of protector of his men from the well-meaning but thoughtless civilians. There is also a side story involving Billy and his sister, Kathryn (Kristen Stewart), who was badly injured and disfigured in a car accident, before, and pleads, in flashback, with Billy to get out of active duty to save his life. She does not realize that Billy is most loyal to his band of brothers, not his family or country, and must follow his heart and mind. Vin Diesel gives a surprisingly touching performance as a man whose primary concern is the safety of his men, no matter the risk to himself. Steve Martin, out of his usual comedic character, plays Cowboys owner Norm Ogilsvey who is sponsoring the Bravo tour and sees the men as way to make money for him – not them – representing the big business lack of respect for the sacrifices of our fighting men and women. I felt, while watching “Billy Lynn’s Long Halftime Walk,” that I was seeing two movies in one. The first, about the victory tour’s last day, is a rumination of how our warriors are perceived and treated by the American people. This part is scattershot as it deals with the many facets of our society, at the time, and how we felt about the second Iraq War. Better, and more linear, is the deadly battle that would bring them to the long halftime walk and the bravery of men involved. I prefer the latter to the former.