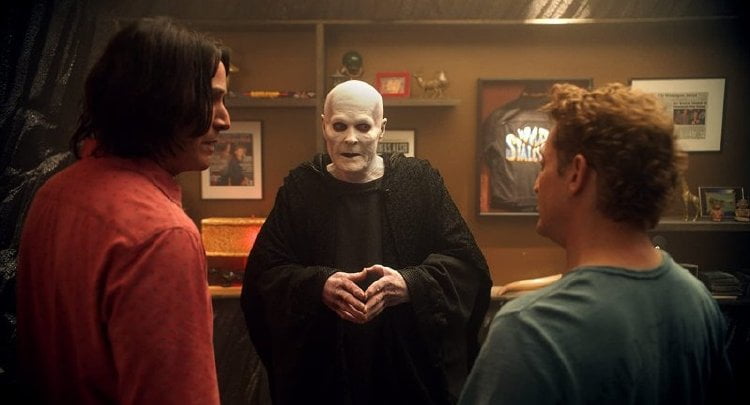 At the wedding of their former babysitter and consecutive former stepmom, Missy (Amy Stoch), who has now also become Ted’s sister-in-law, the Wyld Stallyns premiere their latest musical magnum opus.  Guests are unimpressed, except for the detailed enthusiasm of their daughters Billie (Brigette Lundy-Paine, "The Glass Castle")  and Thea ("Ready or Not's" Samara Weaving).  A short time later, Rufus’s daughter Kelly (Kristen Schaal) arrives in a time traveling egg from the now-threatened Utopian future to inform the Stallyns they must unite the world in song by 7:17 p.m. at mp46 or reality will cease to exist in “Bill & Ted Face the Music.”

Twenty-nine years after their “Bogus Journey,” Bill (Alex Winter) and Ted (Keanu Reeves) are back in a sweet and silly film that combines elements of the first two while staring down a new generation.  With the exception of their 15th century princess brides Joanna ('Glee's' Jayma Mays) and Elizabeth (Erinn Hayes), all other recurring roles have been cast with the original players and the screenplay was written by "Bill & Ted's Excellent Adventure’s" Chris Matheson and Ed Solomon.

Bill and Ted’s unique closeness is reflected in their daughters and questioned by marriage counselor Dr. Taylor Wood (Jillian Bell, dispensing priceless reactions), who cannot get the lads to understand that couples therapy generally means one husband and wife at a time and that professions of love should not begin with ‘we.’   They are also asked to consider why after three decades of trying to kickstart their career, their most recent gig was playing to about forty people who were mostly at the venue for Taco Tuesdays.

This is also on the mind of The Great Leader (Holland Taylor), who has decided maybe the right way to handle everything is to kill Bill and Ted, so she dispatches a lethal robot we will later learn is named Dennis Caleb McCoy ('Barry's' NoHo Hank, Anthony Carrigan) after Kelly’s ex.  Its design is decidedly ‘Sadleresque,’ its intelligence level suspect.  Meanwhile it occurs to Ted that the best plan, given their shrinking timeline, is to travel to the future to get the song they must have already written, an idea Bill thinks is his most ‘counterintuitive-est’ – in a good way.

Director Dean Parisot ("Galaxy Quest") keeps everything zipping along with a script that keeps everyone on the move.  While Bill and Ted hop into their phone booth to visit several iterations of their future selves (with most excellent makeup, dude), intent on saving their marriages along with finding their song, their daughters borrow Kelly’s pod to go round up a band for their dads, going after the likes of Jimi Hendrix (DazMann Still), Louis Armstrong (Jeremiah Craft), Mozart (Daniel Dorr), legendary flautist Ling Lun (Sharon Gee) and the ‘world’s greatest drummer,’ Grom (Patty Anne Miller).  After one too many mistakes are made by Dennis Caleb McCoy, the boys zap themselves to Hell on a rescue mission that will reunite them with Ted’s dad Chief Logan (Hal Landon Jr.) and a rather sulky Death (William Sadler).  (The film also features Kid Cudi dispensing existential philosophies, Dave Grohl and SNL’s Beck Bennet as Ted’s younger brother.)

Reeves and Winter step into their old roles as if they’ve simply grown older along with them and the film is as sweet and silly as our protagonists.  We are treated to aurally queued air guitar and perfectly retro special effects in keeping with Bill & Ted’s world.  And that world is one where love is the prime motivator.  “Bill & Ted Face the Music” may race them against the clock, but there is never any doubt these two could fail us, a nice balm in today’s distressing times.  Stick around for a life affirming post-credits scene in a shared nursing home room.

We were charmed, way back in 1989, with the antics of Theodore Logan (Keanu Reeves) and Bill S. Preston, Esq. (Alex Winter) as they traveled through time, ace their history paper and unite the world through their music. Now, decades later, we find our heroes never fulfilled their destiny in “Bill & Ted Face the Music.”

I have to admit, at first, meeting Bill and Ted after so many years was a little disconcerting. They were the same as their knucklehead younger selves but, also, something very different. I had to watch for a while before I figured it. Bill & Ted got old.

I do not mean old as we would normally see in a long-time coming sequel, where our heroes age gracefully, even nobly. With their latest adventures, the now B&T are not the world-saving success we last saw in the original and the first sequel in 1991, which introduced Death (William Sadler, who reprises his funny Grim Reaper here).

The hopes and dreams of fame and uniting the world with song have gone by the wayside for B&T and their band, Wyld Stallyns. Their failure to save the world through music has created an ever-increasing rift in the space time continuum and history has begun to fold over onto itself.

Rufus’s (George Carlin, back from the grave in holographic form) daughter, Kelly (Kristen Schaal), comes from the future to prod the duo to fulfill their destiny to create the universe-saving song. The boys are daunted by the enormous task but, fortunately, the still have their wives-babes, Joanna (Erinn Hayes) and Elizabeth (Jayma Mays), and their daughters, Thea (Samara Weaving) and Billie (Bridgette Lundy-Paine), to help them.

The filmmakers play with the rift in the space time continuum and have fun bringing in many of history’s most famous figures - like Jesus (Jared Bankens), Babe Ruth (Reece Loustalot), George Washington (William E. Harris), Cleopatra (Bridget Andrews), Buddha (Artis Burney), Harriet Tubman (Georgia Cohran), among many other historic notables.

The story, with its large cast, dovetails out as the several threads unfold, complementing B&T as the wives-babes use time travel to find a better time to be with their husbands and the daughters use it to put together the new band. We also get to meet several renditions of B&T in their hope to find The Song. How they get there is a lot of fun and a bit of nostalgia for us who saw Bill & Ted way back when.