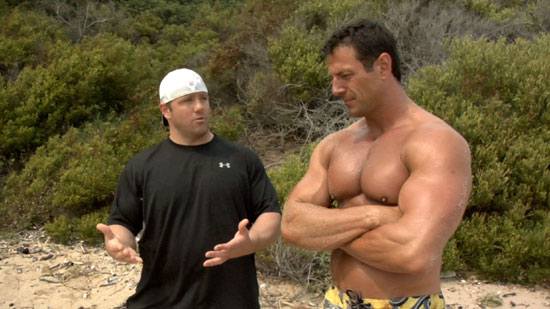 Christopher Bell and his brothers grew up idolizing Hulk Hogan, Sylvester Stallone and particularly, Arnold Schwarzenegger. The pudgy trio all turned to body building and sports to define themselves but Christopher refused to do something both his older and younger brothers did - take steroids in order to become "Bigger, Stronger, Faster."

Bell's film is not only captivating and entertaining, it takes an American subculture and turns our general understanding of it on its head. It's as if Morgan Spurlock discovered that the Quarter Pounder actually had some nutritional value or Michael Moore challenged Walmart's sale of ammunition only to discover they had an airtight process. On top of that, Bell seems more genuine than either of them. It was Senator Joe Biden's declaration before a Congressional Committee that using steroids was un-American that spurred Bell on to making his cinematic investigation. Unlike older brother Mad Dog, who was told he had to take anabolic steroids in order to succeed at college level football, or younger brother Smelly, whose dream of becoming a WWE wrestler depending on getting on 'the juice,' Chris remains steadfastly against taking the drug. He admits major disappointment in discovering that his heroic trio were not 100% natural. Turning inward, Christopher contemplates that the American urge to be the best and win at all costs essentially demands cheating and he uses several stories in the news to prove his point, including that of Olympic runner Carl Lewis, who won a gold medal when Canadian Ben Johnson was stripped of it for steroid use. Lewis claims Johnson cheated, and yet covered up was the fact that he had also tested positive for banned substances. But what is more surprising is what Chris discovers when he turns to the medical community to investigate the damaging effects of anabolic steroids, including such well known reports of cancer, heart damage, sterility, depression and 'roid rage.' The go-to guy for court testimony cannot produce a single fact to back up these charges and several others, including U.S. Olympic Committee member Dr. Charles Yesalis and a professor of medical ethics, Dr. Norm Fost, say they are as safe as legally obtained drugs. (In other words, every drug has side effects for some and anabolic steroids, i.e., synthetic testosterone, have gotten a bum rap.) In the most open-minded segment of his film, Bell visits several professionals, including U.S. Air Force pilots, classical musicians and Tour de France winner Floyd Landis, and demonstrates how all of them use performance enhancers. In the case of the pilots, amphetamines are required under certain circumstances. The musicians use beta-blockers to control stage fright. It is OK for Landis to sleep in an altitude chamber in order to raise his red blood cell count. So why, Chris asks, it is illegal for Landis to use a drug to accomplish the same advantage? And for that matter, why are baseball players like Barry Bonds prevented from being the best that they can be? Because, it would seem, many politicians, from Schwarzenegger to President George W. Bush are hypocrites. Schwarzenegger tries to play the issue both ways, stating that steroid use is wrong, then crowning the obviously juiced up winner of 'The Arnold.' (in an amusing bit, Bell ends up on the front page of the L.A. Times with his former hero while trying to get a sound bite). Bush is a former baseball team owner who must have been well aware of his players' drug use (one of his former players attests to as much). With all this content, Bell also paints a family portrait - one that is going through a mother's disillusionment and a dad's disappointment, however supportive. Christopher's not afraid to shy away from intimate irony, however. When Smelly hits a new lifting goal (705 pounds), both parents are ecstatic even with the knowledge of what he had to do to achieve it. It's the American way.

What could have been a Michael Moore clone of a documentary is, in fact, fresh, sometimes funny, frequently sobering and always interesting. Director and film subject Chris Bell takes something near and dear to his heart ­ anti steroid use ­ and turns it on its head. What started as a diatribe against the use of steroids and performance-enhancing drugs turns into a thoughtful, informative treatise on sports, movies, politics, cheating (or not) and more. Bell follows his own career as a body builder, unsullied by drugs, and that of his brothers, “Mad Dog” Mike and “Smelly” Mark, who both freely admit to the use of ‘roids to achieve their weight lifting goals and dreams of being big in WWE wrestling. Bell sprinkles interviews with many other users and non-users into the equation and introduces our pop culture icons ­ Sylvester Stallone, Arnold Swartzenegger and Hulk Hogan ­ as keeper of the faith for a clean life. The filmmaker is crushed when he learns that his heroes have not just been steroid users, they have used them for years. This leads to Bell delving into the good and bad of such use. The result, which leaves you the viewer to decide, is a surprised, especially to filmmaker Bell. Bigger, Stronger, Faster” is a tightly assembled doc that flows evenly and does its job of informing and entertaining the viewer.