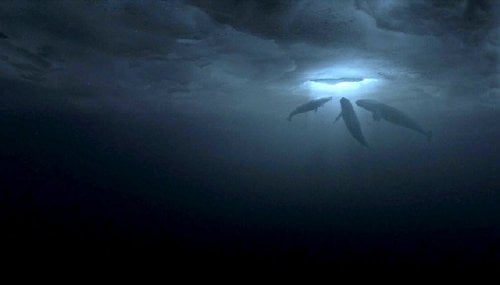 When growing ice threatens to trap a family of grey whales in the Arctic, television news reporter Adam Carlson (John Krasinski, TV's 'The Office') is in the right place at the right time - Barrow, Alaska. His coverage gets national attention, including that of his ex-girlfriend, Greenpeace volunteer Rachel Kramer (Drew Barrymore), who joins him hundreds of miles north of Anchorage to help coordinate a "Big Miracle."

It's interesting to consider ice being a threat to nature in the Arctic in these days when polar bears drown for lack of it, but this Universal Pictures release is based on a true tale from 1988 (adapted by Jack Amiel & Michael Begler, "The Prince and Me," from the Thomas Rose book "Freeing the Whales"). The film follows the typical outline of one of these family nature stories, incorporating romance and villainy, and, as directed by Ken Kwapis (TV's 'The Office,' "He's Just Not That Into You"), it's got a frayed television look, as if all its sets were constructed with old paneling and odd paint lots. But what really recommends it, besides the obvious 'Save the Whales' appeal, is a fascinating central story about disparate groups - we're talking Inupiat whale hunters, oil drilling millionaires, Greenpeace, a Republican government not particularly in tune with the environment, the media, the Soviets at the end of the Cold War and a couple of inventors from Minnesota, all joining forces for good. This movie should be required viewing for every Republican in the Obama Administration Congress. Adam is happily looking forward to wrapping his week reporting from the far north when he's talked into one last shoot by his little 11 year-old buddy Nathan (Ahmaogak Sweeney). It turns out to be underwhelming until he notices spray emerging from ice on the horizon and finds three gray whales fighting to keep a hole open in the ice so as not to drown. They're five miles from the coast and cannot go without air long enough to make it out to open water. Adam, who's been trying to get urban news chiefs to look at his reel, has struck pay dirt. He's also gotten the attention of Rachel, a hard liner who drives him mad yet is still stuck on him, just when his eye has strayed to L.A. reporter Jill Jerard (Kristen Bell), who's come to Barrow to make her own national bid. Amiel and Begler have actually done a pretty good job juggling multiple story strands which Kwapis pulls into a cohesive whole complete with amusing subtext, like how the Barrow locals go in for the big profits when their tiny town gets national attention and the incongruity of its most popular restaurant being a Mexican joint. (Many supporting roles were filled with Inupiat locals whose drollery give the film an offbeat comic tone.) Barrymore nails the Greenpeace earnestness which can make her character grating - she's introduced being physically carried out of a state bidding hearing - yet keeps the audience on Rachel's side. Krasinski's reliably likeable and performs one of the weirdest cinematic 'rescues' ever when a helicopter pilot's eye freezes shut in sub zero temperatures. Ted Danson goes completely against his real persona as an ocean activist as the drill happy J.W. McGraw and, as his wife, Kathy Baker has fun using reverse psychology to get him into the whale saving game. As Nathan's grandfather Malik, John Pingayak gracefully reverses his original agenda (the Inuits initial response to the whale's predicament was to file for a permit to harvest them) when he wisely realizes the PR advantage, then wins over Rachel with his honest respect for the mammals. Another amazing true life incident finds curt Colonel Scott Boyer (Dermot Mulroney, developing Stallone lower lip droop), the man tasked with towing an ice breaking barge with a helicopter under extreme conditions, falling for Kelly Meyers (Vinessa Shaw, "Eyes Wide Shut," "3:10 to Yuma"), the woman from Vice President Bush's office seeking to find an environmental campaign opportunity. The film keeps piling on characters as the whales' plight becomes direr. James LeGros and Rob Riggle are real fish out of water when they arrive with their deicing device and Minnesota accents and Stefan Kapicic and Mark Ivanir have differing opinions on the bridge of the Soviet ice breaker. The cast also includes Stephen Root as the Alaskan governor and Tim Blake Nelson as an on site whale expert. Keep your eyes peeled for a late going unexpected archival cameo of a recent vice presidential candidate seamlessly cut into the action. The whales, named Fred, Wilma and Bam Bam, are portrayed by pretty convincing animatronic puppets. "Big Miracle" can be narratively sloppy and the decision, as in the recent "J. Edgar," to use actors cartoonishly portraying real life figures (Reagan here) when archival footage has also been tapped is a bad one. But Kwapis also does a fine job stitching together a series of minor and major conflicts and adventures within a unique setting.