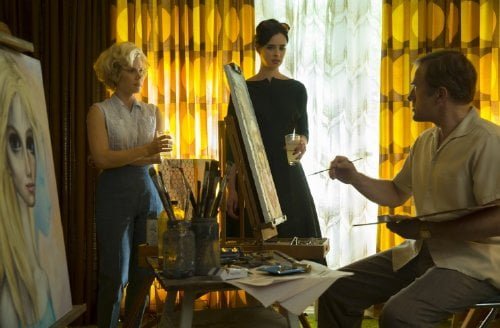 In the 1958, a California housewife made a bold move, packing up her young daughter Jane (Delaney Raye) and moving to San Francisco. She got a job painting in a furniture company, but spent her weekends focused on her real art at public fairs. There she spotted Walter Keane (Christoph Waltz, "Django Unchained"), a man she considered more of a real artist, but after a whirlwind courtship, Margaret Keane (Amy Adams) was astonished when her husband claimed authorship of the paintings he built an empire on, her children with the "Big Eyes."

As a kid, I had a couple of framed Keane prints hanging in my room. Wonder whatever happened to them...at the time they were regarded as kitsch, but "Ed Wood" screenwriters Scott Alexander & Larry Karaszewski unveil the fascinating story that lies underneath, that of a woman whose artistic motivation was pure, who eventually stood up to her domineering husband in court. His story's every bit as fascinating - the man may have been an abusive liar, but, as his ex will be the first to state, he was a genius at marketing, creating a mass market sensation when the art world shunned him. Director Tim Burton ("Ed Wood," "Dark Shadows"), whose output ever since 1994's "Ed Wood" has been wildly inconsistent (only "Sweeney Todd" really satisfied), delivers a solid film only marred by Waltz's hammy, over-the-top performance. Amy Adams is terrific playing the naive housewife determined to support herself in a new place where she has only one friend. DeeAnn (Krysten Ritter, TV's 'Don't Trust the B---- in Apt. 23,' calling back to Burton's former prototypical female, Lisa Marie) is worldly, questioning Margaret's quick alliance to a man already whispered about in social and artistic circles. But Walter is supportive, appreciative and romantic, everything Margaret's ex-husband was not. To think the Keane revolution began with a fist fight between Walter and hungry i jazz club owner Enrico Banducci (Jon Polito, "Miller's Crossing"), who allowed Keane to exhibit his and his wife's paintings in the hallway towards his rest rooms. Gossip columnist Dick Nolan (Danny Huston, "30 Days of Night," "Hitchcock") picked up the story and both man ran with it, reveling in their notoriety, attracting customers. Keane, believing no one would respond to a female artist, claimed the paintings as his own, and after selling one to typewriter tycoon Dino Olivetti (Guido Furlani), opened his own gallery in 1960. It drew crowds, but not paying customers. When his receptionist notes that they cannot keep the paper flyers in stock, a light switches on. Meanwhile, Margaret is closeted at home, producing art work that she must keep secret even from her own daughter. She's a victim of her husband's discriminatory logic, but it eats at her more and more as her husband's lies accumulate. When his alcoholic rage threatens her and her daughter (Madeleine Arthur), she decamps for Hawaii. Becoming a Jehovah's Witness gives her the strength to finally challenge him in public. The eventual trial would be unbelievable if it were not true. Burton's always excelled in design and while "Big Eyes's" production doesn't feature his gothic sensibilities, it is clearly a Burton picture, from its initial neighborhood of pastel uniformity to San Francisco's bohemian underground and the Keanes's eventual 1960's modern home full of glass, angles and color. In one spectacular scene, Margaret walks down a supermarket aisle become all things Keane, seeing other shoppers sporting the eyes of her paintings. Hopefully Lana Del Rey, who was robbed of a Best Song nomination last year with the 'Alone Yet Not Alone' imbroglio, will be recognized this year for her centrally placed theme. But the nagging problem at the heart of the film is Waltz, who turns charm into smarm, over exaggerating the character into a villainous parody. He's effective at the extreme ends of Walter - his courtship and his courtroom antics - but in the middle he's far too unctuous to be taken seriously. The film also features Terence Stamp ("The Limey," "Unfinished Song") as Keane hating New York Times art critic John Canaday, a role completely within his comfort zone, but one he handles with aplomb, and Jason Schwartzman ("Listen Up Philip") as art gallery owner Ruben, incredulous at the success Keane achieves without him. Grade: