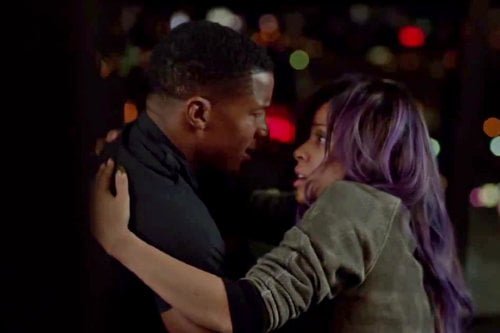 When she was only 10, Noni (India Jean-Jacques) first felt the fury of her single, white, struggling mom Macy Jean's (Minnie Driver, "Good Will Hunting") ambition when her stunning rendition of Nina Simone's 'Blackbird' only scored the runner up prize. Now on the threshold of a huge career, Noni (Gugu Mbatha-Raw, "Belle"), having seen herself disappear into the ugly persona created for her, perches on a balcony high above L.A. She's saved by the young policeman stationed outside her hotel room door and the two have an intense connection, but Kaz (Nate Parker, "Arbitrage," "Non-Stop") is turned off when he's subjected to her hype machine. In order for romance to bloom, Nina and Kaz have to find their way "Beyond the Lights."

Writer/director Gina Prince-Bythewood ("The Secret Life of Bees") may have borrowed from the time worn formulas of films from "A Star Is Born" to "The Bodyguard," but her modernized throwback still feels like a breath of fresh air. This is an old-fashioned love story set in today's hip hop world that works because of Prince-Bythewood's confident mix of shallow show biz flash with intimate emotional moments. In addition to being quite the credible singer, Mbatha-Raw proves quite the chameleon, morphing from a Rhianna-like persona into her softer, more grounded character's self and Parker gives off the vibe of a young Denzel. After her London set 1998 opener, Prince-Bythewood startles us with Noni's transformation by jumping right into the music video which is about to win her a Billboard award in L.A. The young girl with the unruly hair is now decked out with purple extensions, killer claws and a barely there S&M getup complete with symbolic dog collar and chains. She's also paired with the more famous white rapper Kid Culprit (Richard Colson Baker aka rapper Machine Gun Kelly), a romantic accessory devised by her record label. Mom hustles about like an advance team, barking orders, obviously hardened and caught up in the game. When Kaz is asked to go along with the devised press release explaining Noni's suicide attempt as a foolish accident caused by over partying, he does so, even refusing financial temptation from a relentless National Enquirer reporter. But although he's unhappy about the public lie, there's something that keeps drawing him back to Noni, even when his dad, Captain Nicol (Danny Glover), advises him that she'd never be an appropriate mate for his aspiring political career. With her record label hesitating on releasing her first album because of the press attention (one of the film's few off notes), Noni's told everything hinges on her upcoming performance at the BET awards. Having cut off Kid in favor of Kaz on the day of the show, everything goes disastrously wrong when Culprit chooses the stage to vent his unverbalized hurt. Right in time for a romantic montage, Prince-Bythewood moves the action to Mexico, where Kaz has taken Noni for a time out. As she slowly sheds her star trappings, she finds her own voice, but in so doing, she also ironically brings back press attention, the charge led by none other than mom. The third act romantic obstacle miraculously doesn't feel contrived. This entertaining crowd pleaser has a couple of weak spots, namely in Kaz's ill-defined political ambitions, represented by one meeting then largely forgotten. Macy Jean's character must be sketched in a handful of scenes, but Driver's up to the task despite having to negotiate a sharp turn or two, giving us a mother whose love for her daughter must almost be rediscovered, just as Noni finds herself. A very nice touch at the end finds the hairdresser who helped Macy out of an eleventh hour jam in 1998 (Deidrie Henry, "Beautiful Boy") having been in touch through the years, appearing as a salve to the mother daughter relationship. (1998 is referenced again with a neat twist to Noni's final song choice.) "Beyond the Lights" proves that, in the right hands, commercially oriented movies can be more than soulless product. Hollywood should sit up and take notice. Grade: