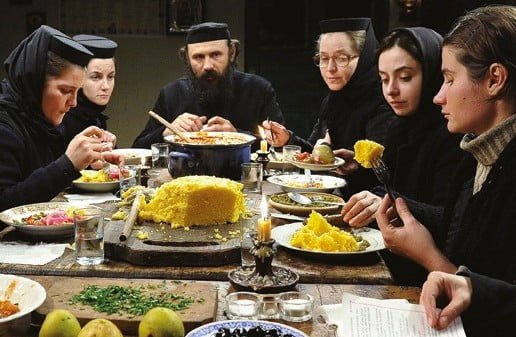 Two girlfriends who grew up together in an orphanage are reunited at a Romanian train. Voichita (Cosmina Stratan), now a nun, is made uncomfortable by the ardency of Alina's (Cristina Flutur) greeting. Alina has been unhappy and lonely the past two years in Germany and wants to convince her friend to return there with her to work on a boat, but once she arrives at Voichita's Orthodox Convent, she will exist forever "Beyond the Hills."

Writer/director Cristian Mungiu ("4 Months, 3 Weeks and 2 Days") has taken a real life event (inspired by the non-fiction novels of Tatiana Niculescu Bran) to consider deeply human philosophies such as freedom vs. discipline, love vs. security, the choices facing those without financial recourse and the hypocrisies of organized religions. It's a masterful work. Romania's 2012 submission for the Academy's Foreign Language Film didn't secure a nomination, although it should have. Mungiu did win Best Screenplay at the European Film Awards and at Cannes, where his two feature film debuting actresses also shared the Best Actress prize. Immediately, Mungiu places us in a landscape that is out of time. It is winter and Voichita's convent is remote, a series of structures on a hill. There is a church, a round glassed chapel and living quarters comprised of a communal kitchen/dining area and a series of small, individual living quarters. The nuns spend their days in work and prayer. During meals, the priest (Valeriu Andriuta), known as Father or even Daddy, and the Mother Superior (Dana Tapalaga), called simply Mother, discuss domestic issues just like a family. They've accepted Alina's visit temporarily, as a person needing help, but the girl in her lay clothes is clearly as uncomfortable with them as they are with her. Although unhappy and not highly educated, Alina is more worldly than Voichita. She wants to experience life and love. Voichita did not procure a foster home like her friend did, and has embraced her religion to secure a place in life, a religion which forbids lesbianism (although never overtly stated, Mungiu and his actresses make it readily apparent to the audience that these girls were lovers). Voichita tries to help her friend within her own parameters, but Alina wants more and when she realizes she isn't getting what she wants she begins to challenge the priest. Father is intent on allowing his little enclave to live undisturbed with Christ, so he tells Voichita that if she cannot calm her friend, they will both have to leave. But when Alina passes out, Mother steps in and the girl is taken to the hospital. Alina is violent, striking out at nurses, so she is restrained. Later, when she comes to, a doctor examines her, prescribes medication and tells Mother they have no room to keep her (a Biblical reference which is repeated) and that the quiet of the convent would be better for her. But Alina, in trying to obtain her heart's desire, innocently commits a sacrilegious act. Father decides to help - with an exorcism. Mungiu's story has many more elements than this, all which reflect back to the central thread. We see Alina's foster home which, like the orphanage and convent, appears to be a caring place, but if the institutions have rules to hide behind, the outside world's charity is corrupt. Alina also has a brother who has managed to find employment, but he is shackled in his low paying job and less fit for the world than she, ironic as he is the only family available to the priest to agree to his sister's ritual. The screenplay features lines of dialogue which organically emphasize Mungiu's themes, such as the priest's dinner table statement on tolerance or the shadowy implications of Voichita being questioned about a man named Pfaff. There is symbolism as well in the stray dogs Voichita has brought into the convent and the increasing noise they make as the tale draws to its climax. Cristina Flutur creates a sometimes infuriating character, but one whose rage against injustice is totally empathetic. Her desire for love is a need that is all-encompassing. Cosmina Stratan has a much quieter demeanor as she fluctuates between a flustered desire to help Alina out of her misery and horror, at first at how Alina disrupts her world, later at how her world reacts. Andriuta is very much a father figure, a stern yet caring disciplinarian. His supporting performance, along with Tapalaga's maternal deference, captures the elements that Mungiu needs to make blame appear ambiguous. Also notable is Catalina Harabagiu ("4 Months, 3 Weeks and 2 Days") as the nun Antonia, who veers from condemning Alina to falling in with the group attempting to 'help' her (in an English remake the role should go to Shirley Henderson). The film's last act features outside authority coming up against the convent's. The police also provide the audience's point of view. With these two groups joined in the final scene, Mungiu adds yet another element, one that comes across as some sort of demonic joke, but the joke's on us because for just a second, he's made us consider a possibility most probably would not have and in so doing made us complicit. A- Robin: Robin gives "Beyond the Hills" a