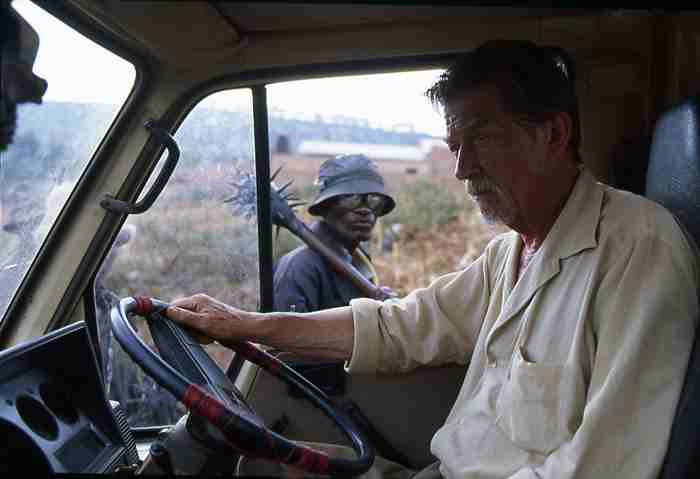 Catholic priest, Father Christopher (John Hurt), and British schoolteacher, Joe Connor (Hugh Dancy), ply their trades at the Ecole Technique Officielle compound and try to make a difference for the people of Rwanda. But, internecine conflict between the dominant, militant Hutus and the Tutsi minority breaks out, resulting in the brutal slaughter of 800000 people in just three months. Priest and teacher are faced with the arduous and dangerous task of trying to save even some of those doomed in “Beyond the Gates.”

This based-on-fact political drama, directed by Michael Caton-Jones, is an excellent companion piece with the moving “Hotel Rwanda” (starring Don Cheadle in an impressive central perf). Both films are founded on one of the world’s most heinous examples of mass genocide as the majority Hutus, using the shooting down of Rwandan president Juvenal Habyarimana’s plane as their excuse, begin the systematic slaughter of their Tutsi rivals. The ensuing blood bath struck both Tutsi “cockroaches” (as they were dubbed by the Hutu extremists) and moderate Hutus opposing the dominant Hutus as men, women, children and babies were hacked to pieces by militia wielding their lethal, trademark machetes. Caton-Jones and company do an excellent job in telling the story and bringing the true nature of the brutality to the screen. John Hurt is first among equals as the dedicated missionary, Father Christopher, who, as the tide of violence washed over the country, tries to create a safe haven within the Ecole Technique Officielle to any Tutsi or Hutu that he can help. He gives the priest an almost beatific aura as the father risks his own life to save his flock, offering sanctuary and solace to those whose lives are likely forfeit. Hugh Dancy, the good looking Prince Charmant in “Elle Enchanted,” gives a solid performance as Joe Connor, a naive teacher whose heart is in the right place but is overwhelmed by the shear magnitude of the violence and hatred that is consuming Rwanda. Clare-Hope Ashitey gives a sympathetic turn as Marie, Joe’s star pupil and the exemplification of all the Rwandans who suffered under the hand of the vicious Hutu killers. Dominique Horwitz gives a full dimensioned performance as Belgian Captain Charles Delon, assigned to lead his small detachment of UN soldiers in a mission that ties his hands from acting against the brutal violence. He personifies the frustration of the men on the line who must watch the atrocities pile up as the world governments do nothing to stop one of the greatest mass murders the world has ever seen. David Gyasi gives palpable hatred to his perf as the Hutu janitor at the school forced to live among the cockroaches – until the slaughter begins. The rest of the cast, on all levels, do a fine job in creating a convincing background. Techs are first class across the board, with production and set design fully realizing the scope of the death shroud that covered Rwanda for three brutal months. The story, by David Belton and Richard Alwyn, is scripted by David Wolstencroft and is a more complex endeavor than “Hotel Rwanda.” “Beyond the Gates” hits its emotional notes a bit harder than the latter film but both play their dramatic tunes to satisfying, somber ends. Lenser Ivan Strasburg’s camera captures the abrupt violence with startlingly candid and gut-wrenching emotion. Beyond the Gates” takes this story and makes it an intense and gripping drama that makes you realize that this page in Rwandan history deserves to be told more than once, lest history forget. It is not an easy subject but it is a compelling one that deserves to be told. Michael Caton-Jones et al do an exemplary job in recreating the madness that gripped Rwanda and telling of those who tried to stop it.