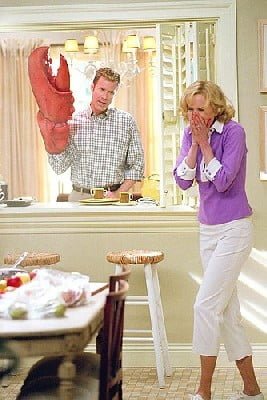 Isabel Bigelow (Nicole Kidman, "The Stepford Wives") has had enough of being a witch and is determined to make it on her own. While she weans herself off spells, Isabel acquires a sweet little bungalow but she needs a job. Meanwhile actor Jack Wyatt (Will Ferrell, "Melinda and Melinda," "Kicking & Screaming"), in a bid to resuscitate a flagging career, is looking for an unknown to costar with, but not upstage him in, a beloved television series remake. Jack spies Isabel twitching her nose and courts her to costar in "Bewitched."

Cowriter (with sister Delia)/director Nora Ephron ("Lucky Numbers," "Sleepless in Seattle") may have come up with a promising twist to television movie remake formula, but she can't create the necessary magic to give it life. Dreary dialogue, over-exposure to Ferrell and Kidman's ill-informed direction to channel Marilyn lite make "Bewitched" a bad spell at the movies. It is most alarming to see the talented Kidman turn up in one bad choice after another ("The Interpreter" excepted, this follows "The Human Stain," "Cold Mountain," "The Stepford Wives" and intriguing failure "Birth"). Red flags go up immediately as Isabel first appears in a blatant ad for Bed Bath and Beyond. Her unconvinced father Nigel (Michael Caine, "Batman Begins") appears and she tells him she wants to have arguments about paint, like the couple she's just seen. One wonders why such a seemingly worldly warlock would have raised such an utter naif as Isabel, though. Kidman plays the character with the sophistication of an eleven year old. Jack Wyatt, on the other hand, is an egocentric buffoon buttressed by his manager Ritchie (Jason Schwartzman, "Rushmore"). The duo succeed in making Darrin Stephens the central character of the new "Bewitched," but audiences don't much care for Wyatt while Isabel's scores are through the roof. Isabel overhears Jack and Ritchie plotting and quits, but a seemingly contrite Jack is impressed by her dressing down of him and begs her to stay (attesting to weak writing that flip flops Jack's motivations around willy nilly). Aunt Clara (Carole Shelley, "Jungle 2 Jungle") arrives while Isabel is drowning her sorrows with neighbor Maria Kelly (Kristin Chenowethd) and production assistant Nina (Heather Burns, "Miss Congeniality 2: Armed and Fabulous") and soon the four are dancing beneath the moon concocting a powerful spell, but like all of Clara's spells it is overdone - Jack is now besotted with Isabel, insisting she always be front and center. "Bewitched" becomes a huge success, but Isabel realizes she must reverse the spell and tell Jack the truth. In addition to Kidman's misguided performance (she can wiggle her nose, although not as stylishly as Montgomery could), we get Ferrell in the earnest mode of "Elf" without any of the charm. His one standout 'bit,' a series of ridiculous line readings courtesy of Isabel's ear-tugging (the Bigelows' real life version of Samantha's nose twitching), is simply a retread of costar Steve Carell's more inspired "Bruce Almighty" bewitching. Shirley MacLaine, so obvious a casting choice for Endora it is yawn-inducing, surprises by actually injecting some much needed humor into the proceedings as Iris Smythson, an actress who frustrates the show's producers by acknowledging the live television audience. Caine is droll, but hardly noteworthy - his best scenes are more attributable to the visual effects that turn him into the Gorton's fisherman and Jolly Green Giant while Isabel shops for groceries or that show him exiting a back drop before it's rolled away. Chenoweth is amusing as Isabel's over-enthusiastic neighbor, but her character essentially disappears after dancing in the moonlight with Aunt Clara and company. Carrell ("Anchorman: The Legend of Ron Burgundy") does quite a good imitation of Paul Lynde as Uncle Arthur, as do Amy Sedaris (TV's "Strangers with Candy," "Elf") and Richard Kind (TV's "Spin City") in late cameos as the Stephens' neighbors Gladys and Abner Kravitz. The Ephron sisters seem to have invested more energy into placing products in their script than giving their characters anything interesting to say (when Isabel puts her foot down, she announces 'I'm quitting tomorrow and I'll do something instead like sailing or polishing fruit,' perhaps the year's most god-awful line). A subplot involving Nigel's romancing of Iris and a montage of Wyatt's past films are wasted comic opportunities. The drawbacks of indulging oneself in anything, be it via witchcraft or great wealth, are not explored. Any Hollywood in-jokes couldn't be less biting. Production Design by Neil Spisak ("Spider-Man 2") paints everything with store front perfection. Director Ephron begins her film with the exotic sounding 'City of Love' by Persephone's Bees, then goes with a soundtrack of witchy selections ("Witchcraft," 'Ding Dong! The Witch Is Dead,' 'Every Little Thing She Does Is Magic'). Simple effects, like a bag of Newman's Own microwave popcorn popping itself, are more effective than more elaborate ones - Isabel taking flight on a broom just looks weird, at least from the little we're allowed to see of it.