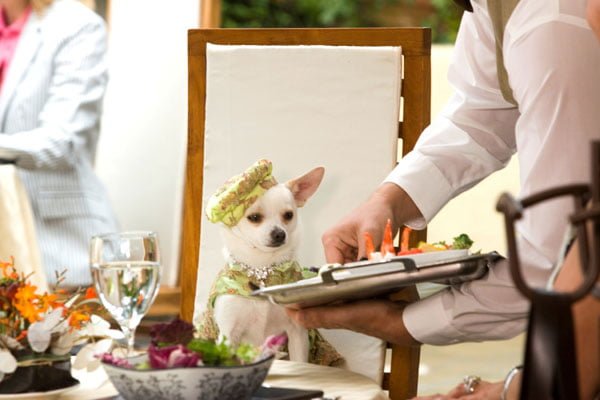 When Aunt Viv (Jamie Lee Curtis, "Halloween," "Freaky Friday") leaves her pampered pooch Chloe (voice of Drew Barrymore) in the care of niece Rachel (Piper Perabo, "The Prestige," "Because I Said So"), things go awry and Chloe ends up on the streets of Mexico. Having loved her from afar, street dog Papi (voice of George Lopez) takes his landscaper owner Sam (Manolo Cardona) south of the border to rescue his "Beverly Hills Chihuahua."

Cowriters Jeff Bushell and Analisa LaBianco uphold the Disney tradition by taking a little "Lady and the Tramp," mixing in a "101 Dalmatians" type villain and topping it all off with the road trip adventure of "Homeward Bound." But "Beverly Hills Chihuahua," which also goes against the grain with its dollop of "Sex and the City" consumerism, is no Disney classic. This anthropomorphic tale will likely please the kiddies, and the animal trainers and vocal talent are to be commended, but anyone over the age of twelve will be bored. When Rachel and her gal pals decide to spend the weekend in a Mexican border town and leave Chloe in their hotel, the little pooch decides to follow them but winds up getting dog-snatched. In a turn as horrific as the 99 puppies wanted for their fur, Chloe finds herself kenneled in the backstage of a dog fighting operation next to German Shepherd Delgado (voice of Andy Garcia, "Ocean's Thirteen") who advises that she's probably worth too much to be put into the ring. But she is, and up against Doberman el Diablo (voice of Edward James Olmos), and her pitiful cries bring out Delgado's latent heroism. He and a bunch of other dogs burst forth and escape. El Diablo's owner, Vasquez (none of Cruella's personality, unfortunately), orders him to bring back the white Chihuahua. Meanwhile, Rachel is horrified to find her annoying charge gone and goes to the police where she runs into her aunt's landscaper, Sam, and Papi, also intent on finding the missing mutt. There are several good messages for kids to be found within "Beverly Hills Chihuahua," the most obvious being that wealth does not make one better than the next and that we should find our 'inner bark.' Honoring one's ancestors is also made note of, not once, but twice, for both the human and canine characters. Disney is also promoting adopting pets from shelters (three dogs are placed during the course of the film) and end their movie with a warning to seriously consider a breed before taking one into a home, an honorable attempt to stem a backlash of unwanted Chihuahuas as a result of their movie. The movie tries to do too much, however, putting too many obstacles and offshoots into Chloe's rescue and it has some serious drag points. It is also, surprisingly, played fairly straight after the initial establishment of Chloe and her equally pampered pooch buddies as dogs with social calendars and spa appointments. No humor is found in Chloe's fish out of water situation - instead she is depicted as more and more pathetic (a lesson in ignoring the responsibilities of pet ownership), the camera framing her as a very small and alone in a big space. Delgado is a hero with a handicap. Comic relief comes from the characters of rat Manuel (voice of Cheech Marin) and iguana Chico (voice of Paul Rodriguez, "The World's Fastest Indian") - the kids at the screening I attended enjoyed them, but they are also one of the aforementioned offshoots and could have been excised entirely. With the exception of rising Mexican star Cardona, a very appealing Sam, the humans play their parts broadly. Perabo mugs and Jamie Lee Curtis provides an awful lot of animated baby talk. The vocal cast are well matched with their characters, most notably Garcia as the noble Shepherd, who clearly put a lot of thought into his interpretation. Barrymore keeps Chloe sympathetic despite her initial snobbery. Luis Guzmán is fun as Chucho, Delgado's buddy who discovers the meaning of 'minty fresh.' "Beverly Hills Chihuahua" covers a lot of Mexican ground with location shooting in Mexico City, Puerto Vallarta, Guadalajara and the Sonora Desert. Oscar winning visual effects supervisor Michael J. McAlister ("Indiana Jones and the Temple of Doom") oversees some hit and miss work with some painfully obvious CGI (mountain lions, dogs carrying 'Chloe' in their mouths) amidst some truly subtle facial manipulation of the real animals and a terrifically rendered iguana. Hit and miss describes Chloe's costuming (Mariestela Fernández) as well. When not aping classic looks it's uninspired. The animals do some amazing things and Papi, who hops when he runs, is a real find. "Beverly Hills Chihuahua" features a lot of cute and well trained dogs in a story with some good messages for kids, but parents are sure to get itchy with the meandering storyline.