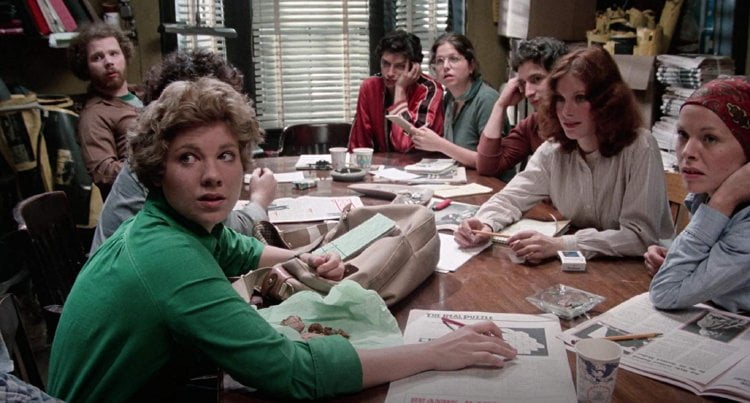 As the countercultural 70's begins to morph into the more commercialized 'Me Decade,' staffers at The Back Bay Mainline discuss quitting en masse should publisher Stuart Wheeler (Richard Cox) sell out to Roy Walsh (Lane Smith), a newsman known for scooping up alternative weeklies and remaking them for the mainstream. But although they are as close as family, as photographer Abbie (Lindsay Crouse) notes, they are made up of those either on their way up or on their way down and there is interpersonal drama "Between the Lines."

Joan Micklin Silver ("Hester Street," "Crossing Delancey") was one of the very few female directors working back in the 70's and her prior experience with The Village Voice made her ideal to tackle a script by Fred Barron who was writing for the Boston Phoenix (the paper, along with its predecessor The Real Paper, upon which the film is based) at the time. The 1977 film is surprisingly relevant today as large media empires gobble up smaller papers and others, like the Village Voice itelf, disappear entirely (the Boston Phoenix ceased publishing in 2013). The film can be rough around the edges with some dicey editing and inconsistent acting but that roughness serves its art direction well, the purple walls and mustard accents of the Mainline's cramped offices made homey with admin Lynn's (Jill Eikenberry) flower stencils. The film's most serious drawback is the sexism on display. While obviously acceptable as inherent to the film's plot, its embeddedness along with multiple gratuitous topless scenes are cringe-worthy today. Boston audiences will be treated to location shots of Harvard Square in its pre-globalization heyday while cinephiles will delight in early performances of stars like Jeff Goldblum before they were known while mourning those, like John Heard, Bruno Kirby and Gwen Welles, who left us too early. The film opens with The Hawker (Michael J. Pollard) shilling the Mainline in the same style as its content ('Your daughter reads it,' he informs one middle-aged Brahmin) before moving to the office's editorial meeting where Frank (Jon Korkes) takes pitches. A film critic is mocked for suggesting a trip to Cannes, no matter the prestige he rightfully claims it would bring. Pushed, Max Arloft (Jeff Goldblum) comes up with a promo party for Southside Johnny & The Asbury Jukes (who will be featured overbearingly when that party rolls around). The meeting's interrupted by advertising director Stanley (Lewis J. Stadlen) proudly informing Frank that four pages will be pulled for new advertising. Frank physically threatens the man, demanding additional pages for the run. Max makes a laughable request for a raise before heading down to Cheapo Records to trade promos for weed money, young staffer David Entwhistle (Bruno Kirby) hanging on his every word. He picks up on Max's mention of a major bootlegger who happens to be running for city council and decides to make his own run for an important story, one which will see him facing hired goons on the Boston Fish Pier. Harry Lucas (Heard) is the paper's star investigative reporter, but he's lost his passion after years of reportage haven't changed anything. He's put out that it's Michael (Stephen Collins), not he, who's gotten a book deal despite having never made the effort. Harry's in an on and off relationship with Abbie, whose unique angle talking to his latest subject, Combat Zone stripper Danielle (Marilu Henner), sets him off as well. Meanwhile staff writer Laura's (Gwen Welles) been holding down a second job so Michael could write that book and is wrestling with the idea of following him to New York City where she's sure to be even less appreciated than she is in Boston. The macho competitiveness between Harry and Michael and the female resourcefulness that enables it are rich parallel story lines which eventually intersect, but it is Max, the music critic we never see critique, who gets all the laughs. When he's not using his exalted status to sponge off his readership, he's using it to spout nonsense during a lecture to female college students. When a man enters the Mainline's offices, smashes Lynn's typewriter, declares it conceptual art by Herbert Fisk (Raymond J. Barry) and demands to be interviewed, Max responds with his own take in an escalating demolition competition that ends with Fisk departing in a huff. Max's clothes, a military paratrooper's jumpsuit topped with a red satin bomber jacket (until it's lost and replaced with a plaid blazer), are as amusingly idiosyncratic as he is. Lynn, in her Gibson girl hairdo and flowery smocks, may be the quiet office den mother, but reveals the steeliest backbone, standing up to both Stanley's sexual harassment and new owner Walsh's hypocrisy. (The film also stars Joe Morton as Ahmed, who, unfortunately, is little more than background.) "Between the Lines" isn't your typical newspaper movie, invested more in its ensemble dynamics than the workings of the Mainline. Cohen Media's new 2K restoration blu-ray brings this time capsule back into sharp relief for audiences to rediscover, the intervening decades revealing that while many things have changed, good journalism remains an uphill battle. Grade: