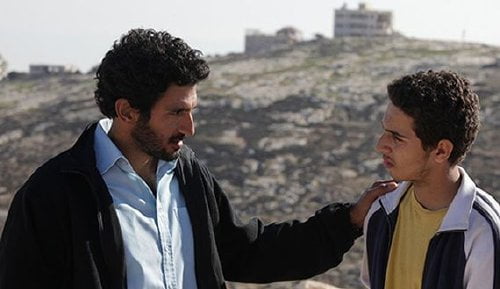 Ibrahim (Hisham Suliman) is a militant Palestinian leader being hunted by the Israeli Defense Forces for masterminding a suicide attack is East Jerusalem. Unknown to Ibrahim, his 17-year old brother, Sanfur (Shadi Mar’i), has been secretly working as an informer for two years for Razi (Tsahi Halevi), an IDF intelligence officer tasked with the capturing or, if necessary, killing of the ffelusive terrorist whose next target is “Bethlehem.”

The Israeli submission for the 2014 Foreign Language Film Oscar is much like the Palestinian submission in story, but quite different in execution. Where "Omar" kept its focus tightly upon a handful of individuals, using the ramifications of a love triangle as a springboard to larger issues, cowriter (with Ali Waked)/director Yuval Adler's film follows a large ensemble through complex associations, playing much like a French policier. Both films feature a young Palestinian being used as an informant by an Israel agent who sees himself as a father figure (the agents' names are only one consonant apart, Rami vs. Razi). Both films conclude in similar fashion, albeit with vastly different emotional impacts. "Omar" has the greater staying power, but "Bethlehem" is a fast-paced thriller that engages throughout.

Is it coincidence or intentional that Israel and Palestine each has an entry into the Academy for Best Foreign Language film that is about a young Palestinian being courted by Israeli authorities to inform on his own people? I do not have the answer to that question but the two films, Israel’s “Bethlehem” directed by Yuval Adler and Palestine’s “Omar” directed by Hany Abu-Assad are that closely linked. But, each film has its own cultural and political POV and agenda. “Bethlehem” studies young Sanfur and his relationship with his handler Razi, a compassionate Israeli cop who has nurtured Sanfur in an almost fatherly way. The young man’s treatment, with respect, from Razi forces him to question his loyalties to his country and his family, including and especially his older brother Ibrahim. The film examines the complex political climate that is not just about Israel versus Palestine. “Bethlehem” also looks into the relations within Palestine between the legitimate Palestinian Authority, Hamas and the radical Palestinian Brotherhood. They are not, per the film, working in harmony with each faction vying for power within Palestine. It also points out that the Israeli’s too have factions within. The relationship between Sanfur and Razi is the center of the film. Razi, even though he is using the young man to thwart Ibrahim’s plan to launch a suicide attack within the titular historical city, has an honest affection, like a father or older brother, for Sanfur. This makes Sanfur a complex character as he must choose between two worlds with the personal agenda to protect his aging father. “Bethlehem,” like “Omar,” makes a statement about the ongoing controversy between Israel and Palestine and does so in a frank and straightforward way.