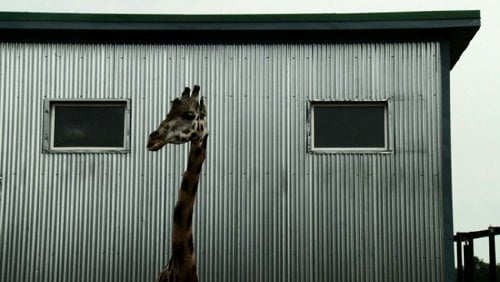 This documentary is no ordinary beast! While some people may find this series of long shots from a static camera, many framing only part of the subject, tedious, others will find that Côté's camera provokes all kinds of questions and ideas. The film is at turns mundane, poetic, disturbing and comical. The film begins with close ups of the artists's eyes as they draw their subject. Over time, the camera moves to longer shots until the subject - a lifelike stuffed animal - is apparent. No one would ever question the resulting artworks as being representations of anything but a live animal, however. From here, Côté begins to show us long shots of living animals in their outdoor zoo enclosures. A bison or a llama stares at the camera and we begin to wonder what is going through the creature's mind or if it is merely being. Wooly ponies framed low against a high aluminum backdrop makes one wonder just what the animals, who begin to move in towards the camera, are seeing, as the manmade backdrop blots out the sky from our point of view. We begin to see the zoo interiors and maintenance rituals, then the very disturbing sights of lions and tigers showing caged syndromes, bashing against their cage doors. In another shot we see only the legs of a pair of zebras in a small pen, panicking, and it is almost unbearable that no one comes to set them free. A zoo employee who we have seen hand feeding apes sits in an office staring ahead as the clanging of animals penned against their will reverberates all around her. And then, using the age old tension buster comic relief, an ostrich head pops up into the frame of the next sequence, looking quite alien and absurd. Côté then moves on to document the work of taxidermists and we are both repelled by the gruesome nature of the art and impressed by the painstaking craft of it. (Another comment entirely is made by the inclusion of a pinned up women's underwear ad over the machine beating the animal hides.) Côté ends with an overcast day at the zoo, with humans visiting animals seemingly unimpressed with their presence. "Bestiaire" invites all kinds of reactions, from our urge to anthromorphize animals to a desire to truly understand them. And whether he had intended it or not, "Bestiaire" is no friend to the zoo, despite the depiction of caring workers. You may never regard an animal quite the same way again.