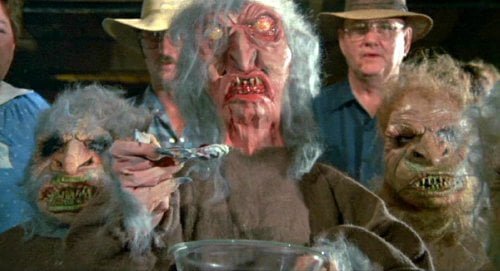 Michael Stephenson makes his writing/directing debut with a fond look back at the movie he starred in at the age of twelve, a film that has become a cult hit he considers the "Best Worst Movie." What's truly impressive about this documentary is that you can thoroughly enjoy it without ever having seen "Troll 2," which may or may not be the worst movie ever made. If the short clips seen are any evidence, it's at least in the running. But Stephenson doesn't make himself the star of his own film - that honor goes to George W. Handy, a dentist in Alexander City, Alabama, who enjoys the limelight when he's not doing free dental work for needy kids. Handy played Stephenson's dad in "Troll 2" and, as depicted here, the film's current cult status has given Handy a new and improved identity. "Best Worst Movie" would make an excellent double bill with recent release "Winnebago Man," as both films chart how the most unlikely and unexpected media attention change a man's life. Stephenson does chronicle the other members of the cast, all of whom partake in the film's new notoriety except Margo Prey, a delusional actress who still believes in her 'career' ("Troll 2" is the only credit listed for her on IMDB). The way Stephenson works up to the film's pinnacle as a cult item also works as an analysis of how such things are born, the herd mentality of coming together to celebrate failure. Marvel at the film's Italian director who calls "Troll 2" 'a ferocious analysis of today's society!' Wonder at the Austrians who subtitle the film for video release across the Atlantic. "Best Worst Movie" is a laugh out loud funny documentary steeped in nostalgia and good cheer with some sly social commentary worked in. It'll make you want to see the film that reportedly hasn't got a single troll in it.