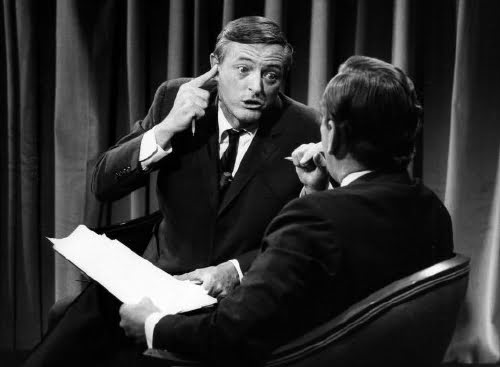 In 1968, ABC was the struggling third place network going into the Republican and Democratic conventions. NBC had Huntley and Brinkley. CBS had Cronkite. ABC approached leading conservative William F. Buckley, producer/host of 'Firing Line' and editor of the National Review, as an on air analyst and he responded that the only people he wouldn't appear with would be a Communist or Gore Vidal. Vidal, whose play 'The Best Man' about a political convention was JFK's favorite, was currently enjoying controversy, his satiric novel 'Myra Breckinridge' having just been released as a film. The two's groundbreaking series of debates would change television punditry and personally reverberate through the remainder of the lives of "Best of Enemies."

Cowriter/directors Robert Gordon (PBS's American Masters) and Morgan Neville ("Twenty Feet from Stardom") show how to take one notorious flashpoint lasting less than 30 seconds from a debate of almost 14 minutes and spiral outwards to build a compelling story. The loathing of two men on opposite sides of the political spectrum became highly rated television, a phenomenon which has spurred screaming talking heads ever since ('60 Minutes' began its Point/Counterpoint segment, later parodied with Jane Curtain and Dan Akroyd on SNL, in the 70's. 'Crossfire' would follow soon after. Today there are almost too many instances to mention, this type of programming regularly featured on nightly news programs.) But "Best of Enemies" is also about these two particular men, alike in so many ways, whose fifty year old opinions could easily stand for America's deep political divide today. The filmmakers begin by establishing ABC's situation, a famous quip at the time being that the best way to end the Vietnam War would be to air it on ABC as it would be canceled within 3 weeks. The network's news division was so strapped, its on site studio literally collapsed, rebuilt on the fly with jury rigged lighting and lots of drapery. We get some talking heads (Media Studies expert Todd Gitlin, the late Christopher Hitchens, William F's brother Reid and more) and a bit of background on Buckley and Vidal, the former sailing to Cozumel before the first debate while the latter hired a researcher to prepare. Both men were highly educated (although Vidal enlisted in the Army rather than pursuing a college degree), East Coast intellectuals with distinctly aristocratic speaking voices, Buckley known as a great debater, Vidal an eloquent speaker. Moderator Howard K. Smith began each debate by fielding a question (the first was which Republican nominee had the best chance of securing the nomination/vote). The men responded calmly, but each took every opportunity to take pot shots at the other. But when they moved to Chicago for the Democratic convention and Mayor Daley's police force came down upon peaceful demonstrations, Buckley referred to the protesters as Nazi appeasers. Vidal retorted that Buckley was the only 'pro-crypto-Nazi' he could think of. Buckley lost it, his face turning into a mask of savage rage. He threatened Vidal with physical violence. And he called him a queer on national television. Vidal kept his cool. Buckley followed the debates with an Esquire piece entitled 'On Experiencing Gore Vidal' which Vidal countered with 'A Distasteful Encounter with William F. Buckley.' Lawsuits were filed. When Buckley retired and was presented with the infamous video clip, he went silent, his appearance suggesting a heavy regret. Vidal spent his waning years in his Amalfi Coast cliffside villa, replaying tapes of the debates constantly, not a day passing without mention of his former foe, but instead of regret, Vidal appeared to dance upon the dead man's grave (Buckley died in 2008, Vidal in 2012). "Best of Enemies" isn't a vehicle for the men's political debates as the filmmakers' editing choices lean more heavily on the personal barbs (all of the debates are available in full on Youtube). Instead Gordon and Neville illustrate how Buckley and Vidal, whose like no longer exists, sparked a mode of political contention which erects walls instead of breaking them down. Grade:

I remember, vaguely, back during the Republican and Democratic conventions 1968, watching the debates between ultra-right-winger William F. Buckley and equally ultra-left-winger Gore Vidal. These debates are the showcase for documentary filmmakers, Robert Gordon and Morgan Neville, as they present battle of intellects as the “Best of Enemies.” 47 years is a long time so those memories of the ’68 conventions were very dim. “Best of Enemies” reboots those remembrances, making me realize what a treat to watch the two uber-intellectuals locking horns and drawing blood – not about the Republicans and Democrats, but as flag wavers for their side. CBS television programmers had a stroke of ratings genius when it was decided to pair the two iconic intellects who, it is apparent, hate each other. The core of “Best of Enemies” is the nine debates between Buckley and Vidal, but the filmmakers delve, also, into the lives of the two from their early formative days. The film is also a history lesson about the birth of CBS News and its long fought for battle to compete against the television news juggernauts of the time – Chet Huntley and David Brinkley on NBC and Walter Cronkite on CBS. As I said, the center of the film is on the debates and they are an amazing fight between the country’s two leading intellects of the 1960s. Buckley, the self-proclaimed conservative right wing civil libertarian, and Vidal, the author, at the time, of the controversial novel Myra Breckinridge - something that Buckley refers to, disparagingly, many times during the debates. The high point of the debate was…never mind. See “Best of Enemies,” and find out for yourself.