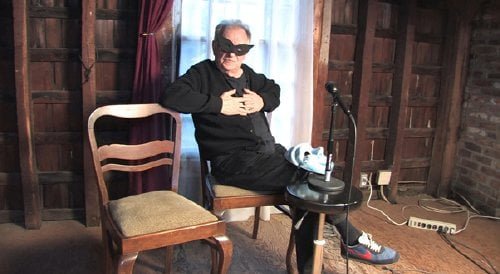 After his beginnings at Look magazine, where he worked with Stanley Kubrick, Bert Stern became one of Madison Avenue's most creative photographers, breaking the advertising mold which had been virtually unchanged into the early 1960's. A true hedonist, the artist who loved women created the most iconic pictures of Marilyn Monroe just before her death. He also spun out of control, using drugs to fuel his demanding work schedule. One of his subjects since the age of thirteen and an on again off again lover for decades, writer/director Shannah Laumeister turns her camera on "Bert Stern: Original Mad Man."

Here's a documentary that comes from an unusual angle, the subject's lover looking at both the artist and the man dispensing with rose colored glasses. It's pretty clear Stern doesn't like being in front of the lens, so perhaps Shannah Laumeister is the only person who could have persuaded him. Her documentary charts what made him so unique on Madison Avenue, beginning with the Smirnoff ad where he traveled to Egypt to catch the pyramid inverted in a martini glass, the ultimate in cool and dry, to becoming the first 'name' photographer, shooting the likes of Liz & Dick (and predicting their marriage.) The film begins with the words 'My mother was beautiful,' as Stern reflects. He talks about shooting the beautiful women of Asia, where he could have any one he wanted, but says the two women he has been most obsessed with were Marilyn Monroe and his wife, principal ballerina Allegra Kent, who left him, fearing for herself and their children. Laumeister interviews Kent, but doesn't succeed in capturing the marriage. There are a couple of odd bits with a grown daughter who is more like Julia Sweeney's SNL Pat character than a model or a dancer, leaving more left unsaid. Stern's two stints in a mental hospital are also less than fully fleshed out. Laumeister's more successful delving into the way the man worked, setting up one shoot after another in a row in his studio. He tells us that pictures are all about triangles, and we see examples to support this. We hear from some of his subjects, like Twiggy, who laughs recollecting Stern's words about her beauty - from the neck up. Most of the running time is given over to the infamous Monroe pictures for Vogue, who rejected the first batch because of the lack of clothing (and, which, ironically, became the most famous). The third session was the most intimate, as if Stern was making love to his subject with the camera (Marilyn turned the actual man down). It was these pictures which catapulted Stern back into vogue, when a book was published in 2006. Laumeister keeps herself out of the picture until its later goings when she admirably reveals her own place in Stern's story. But the pictures of herself she chooses to accompany this are an odd choice, nudes which are the closer to Penthouse than Marilyn's Playboy. We're left with the rediscovery of an artist and a portrait of a man who quietly admits his own shortcomings, and yet despite its inclusion, his personal life remains more of a mystery.