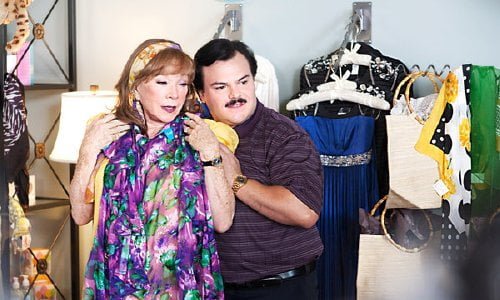 Bernie Tiede (Jack Black) is beloved by all in the small Texas town of Carthage. As the assistant funeral director he sends his customers on to a better life with care and compassion. He befriends the wealthy wife of one client, Mrs. Marjorie Nugent (Shirley MacLaine), who is known for her brittle personality and demanding ways and becomes her constant companion – until a bizarre discovery is made about “Bernie.”

Don Leggett (Rick Dial, "Sling Blade," "Crazy Heart") needed an assistant to help him run his funeral home in Carthage, TX, took a chance on Bernie Tiede (Jack Black) and never looked back. Although a number of men in the town thought Tiede was 'a little light in the loafers,' everyone loved the guy, who not only knew just how to conduct a funeral but took on orchestrating the town's Christmas decorations, directing the local theater group and running the Methodist church choir. He also made it a point to visit recently bereaved widows, bearing gifts. But when the town's ornery oilman Rod Nugent died, Tiede met the town's richest - and least liked - widow, Marjorie Nugent (Shirley MacLaine), and began a codependent relationship which turned ugly. Marjorie was dead for nine months before her body was found in a freezer, shot in the back four times and Carthage was aghast to learn that her murderer was "Bernie." Cowriter (with Texas Monthly's Skip Hollandsworth)/director Richard Linklater ("Before Sunrise," "Me and Orson Welles") has found his 'truth is stranger than fiction' story, and he's mined gold by structuring it like a town gossip version of "Citizen Kane." Jack Black gives his best performance to date as the selfless assistant mortician with a taste for the finer things in life, but it is the real life townspeople, spilling on their most infamous citizens, who make "Bernie" so delightful. Linklater finds just the right mix of documentary and flashback, establishing Bernie with the fondest of memories by locals (augmented by some Texas actors) who define the terroir of their town. The women natter on about how wonderful Bernie was and how horrific his victim ('There were people in town who would have shot her for five dollars.) Some of the men note that while he loved the old ladies he had little use for those of his own age, but they're all also quick to approve his good deeds. One particularly verbal gent gives us a hilarious tutorial on the five sections of Texas where only the people in the East, where Carthage lies, don't have some kind of moral deficiency. Bernie is described in the main action by Don, amazed at having chosen the candidate of his dreams. We see Bernie responding to funeral hiccups, mentoring aspiring morticians and smoothly upselling caskets with features, like 'memory drawers,' that clearly tickle his fancy. When Marjorie comes into the picture, she's a taciturn fish out of water, having no social intercourse with her home town except for employees who despise her, but Bernie's unprecedented and impartial kindness wins her over. MacLaine very shrewdly makes us - and Bernie - think perhaps she's been misjudged, until she's hooked her fish with the things money can buy, including employment. Marjorie, it turns out, is a manipulative bitch, estranged from all but her financial advisor, Lloyd Hornbuckler (Richard Robichaux), and when Bernie begins showing up everywhere without her, all but Lloyd are happy with his excuses. Black, with hair sculpted so perfectly it almost looks plastic and a trim little moustache, is a walking advertisement for his cosmetization of corpses. He's got the physicality of of a prim yet elegant personage in an overstuffed package, gliding around on tiny feet. Black also gets to sing, although numbers far removed from his Tenancious D persona. Matthew McConaughey ("The Lincoln Lawyer"), who appears to be in a career resurgence, plays DA Danny Buck Davidson as a many whose eye is only on justice and while he's a bit comical, he's on the wrong side. Because everyone in Carthage so hated Nugent and so liked Bernie, they don't want him to pay for his crime and so Buck has the trial moved to a neighboring county (our Texas lecturer lets rip on these folks as trailer park subhumans unfit to hunt squirrels). Tiede was found guilty - his confession probably helped - and sentenced to life. We see the real Tiede in pictures with Marjorie and in conversation with Black as the credits roll. Linklater and his star play Bernie's story straight, yet ever so slightly heightened, so the 'comedy' is only laugh out loud funny when it's being commented upon. A better balance would have made "Bernie" better. It's like a cousin to the con man comedy "I Love You Phillip Morris," based upon another true Texas crime tale, but Linklater's film has a sharper focus.

The best thing about “Bernie,” and there are a lot of good things, is the stellar performance by Jack Black in the titular role. The comic actor goes all out in creating his character and, though this is a dark comedy, gives an effective dramatic turn to Bernie. Black carefully builds his character so you, like the townsfolk, get to know and like the man. Bernie is dedicated to his job and his clients; he volunteers each week to read the town’s obituaries on the local radio station; he is musical director, director and actor for a nearby college theater troupe; he selflessly looks in on the widows of his clients – the dear little old ladies or DLOLs – to make sure they are all right; he helps folks with their taxes and is just an all around nice man. Things will change for Bernie when one of his clients happens to be, or was, the richest man in Carthage. Following his usual routine, he visits the dead man’s wife, Marjorie, thought to be the meanest person in town. She softens to his kindness and Bernie becomes Marjorie’s travel companion, caretaker and financial advisor. This idyllic life does not last long for Bernie as Marjorie becomes more and more demanding of him and his time. Eventually, Bernie feels trapped as Marjorie comes to treat him like an indentured servant, making him wear a pager and calling the number 50 or 60 times until he responds. Bernie’s once happy existence is now a living hell for the man until, one day, Marjorie goes missing. Richard Linklater and co-scribe Skip Hollandsworth take the true life story of Bernhardt “Bernie” Tiede and, without embellishment, tell it in mock documentary style. There are copious talking head interviews with the town people singing Bernie’s praises while Carthage DA Danny Buck Davidson (Matthew McConaughey) works to get Bernie convicted of murder. McConaughey, though, is the one false note in “Bernie.” The character is played as a ambitious buffoon who is more interested in keeping his job than serving justice. Also, when the focus of the film moves away from Bernie, it loses steam. A fascinating true story, terrific acting by Black and MacLaine and solid direction make “Bernie” a must see, especially if you like Jack Black.