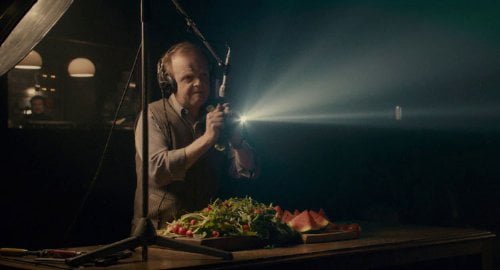 British sound engineer Gilderoy (Toby Jones, "Infamous," "The Hunger Games") is barely awake from his flight to Italy when he's subjected to the first scene of "The Equestrian Vortex" while foley artists Massimo and Massimo (Jozef Cseres and Pal Toth) hack up watermelons. The introverted sound man, used to working on local nature documentaries from his garden shed, is perplexed as to why his services were procured for an exploitation horror film at the "Berberian Sound Studio."

This twisty psychological horror yarn from writer/director Peter Strickland is the best kind, one that is open to many interpretations but can be enjoyed on its own creepy and insinuating surface. We never see anything but the opening credits of the film within the film, but Strickland uses his protagonist's profession, along with some hilariously brutal scene descriptions, to implant horrors in our heads and Toby Jones's subtle descent into madness, whether of his own or the studio's making, complements everything the filmmaker sets out to achieve. If there is a problem to be found here, it is Strickland's soft landing when his film screams to end with a cacophonous assault. Not only has Gilderoy been thrown into an alien film experience, but a strange environment. Director Giancarlo Santini is rarely around, producer Francesco (Cosimo Fusco, "Angels & Demons") is his own good-bad cop and secretary Elena (Tonia Sotiropoulou, "Skyfall") can barely be bothered to acknowledge the Englishman's presence. Beautiful actresses are caged in sound booths to articulate reactions to having her hair pulled out or a red hot poker inserted in her vagina. Vocal performance artists (Suzy Kendall, "The Bird with the Crystal Plumage," "Torso" and Jean-Michael van Schouwburg) arrive to give voice to inhuman sounds. Office politics veer from inferences that one may never get paid (Gilderoy's attempts to get reimbursed for his flight go from frustration to nightmarish implication) to hedonistic gaiety (a set visitor's gifts of Belgian chocolates and champagne) and warnings about Silvia (Fatma Mohamed), an actress to whom Gilderoy has become attached. Then there is the reach from back home as Gilderoy receives the first of three letters from mum describing the chiffchaffs which have nested at his shed and shed a lot of light on Gilderoy's character as they increasingly dovetail with events in Italy. After Silvia rebels against her poor treatment, Strickland throws Gilderoy into yet another film within his film, one in which the man can see himself projected, subtitled, back at the beginning of his studio experience. We see a segment of his sylvan Boxhill nature documentary, the one for which he's been sent a cheque according to the second of mum's letters (and which is artfully created to mirror the real 1970's deal), before a literally soundless scene of darkness and sleep leading to more nightmares. Jones is simply perfect as the introverted sound engineer becoming more and more disturbed by the film he's working on. By the time he's creating sound for a scene he refused to work on, he makes his foley work seem like the murder he is witnessing. Without showing us a frame, Strickland conjures a film that suggest Dario Argento directing "Mark of the Devil" while his own film falls somewhere between the aural equivalent of "Blow Up" and "Peeping Tom." Cinematographer Nicholas D. Knowland makes great use of shadows and the color red, a flashing Silenzio sign suggesting David Lynch. A cutaway to massacred produce looks like a Brueghel still life. Dubbing charts suggest the plotting of the film's own mystery. "Berberian Sound Studio," with all its analog recording devices, is a film buff's dream and a psychological horror puzzler. Delights can even be found in the closing credit scroll, where we learn the clapper loader was Felix Pickles. 'It must have been the magpies.' A- The DVD: As if the film itself weren't great enough, here's a DVD that's loaded with all kinds of terrific extras when usually only blu-rays now get this treatment. Strickland's commentary track provides just enough clues to look at the movie from different angles without defining his intention. His disclosure that the film was reshaped from his original outline of presenting it as five twenty minute 'rolls' is one of them. It's refreshing to hear that his indulgence of a Fassbinder reference was a mistake and we gain respect for arduous attention to detail learning about the convolutions the filmmaker went through to degrade images for transitional scenes. Oddly, however, for a film about a sound engineer, one cannot hear the film beneath the director's commentary, although subtitling negates most of the need. A Behind the Scenes featurette delves into Jones's casting, admiration for the Nagra (and how the 7 racks of sound equipment shown in the film have been replaced by a laptop) and Strickland's enthusiasm for his two vocal performers (both of whom are "Exorcist" worthy). Deleted, Extended and Alternate Scenes all feature Strickland's reasons for both inclusion and excision and unlike most of the features, every one is fascinating.