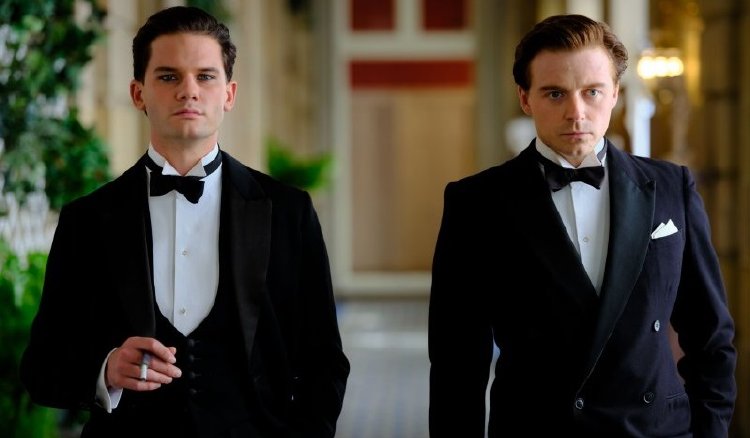 After losing his younger brother Hamo in Gallipoli and being awarded the Military Cross for bravery on the Western Front, Siegfried Sassoon (Jack Lowden, "Fighting with My Family") became a conscientious objector in 1917 with his ‘Soldier’s Declaration,’ believing the war was being prolonged by false patriots.  He spent the remainder of the war in an Edinburgh psychiatric hospital and was part of the literary set known as the Bright Young Things in the 1920’s.  But Sassoon, who married after two particularly devastating homosexual relationships fizzled, was a bitterly unhappy man who made a last ditch effort to find peace in Catholicism as “Benediction.”

The filmography of writer/director Terence Davies ("Distant Voices, Still Lives," "A Quiet Passion") is steeped in British period nostalgia and literature, making Sassoon appear an obvious subject for the auteur.  But this film, which can be thought of as a film in three parts (Sassoon’s later years make brief appearances in earlier segments), never satisfactorily explains the abrupt changes we see in Sassoon’s later years, when the role is assumed by Peter Capaldi ("Local Hero").  Still, there is much to delve into here, Davies accompanying the poet’s words with black and white archives of the horrors of which he writes so eloquently before segueing into the flamboyant lifestyles of the post-war moneyed artist set.

Sassoon is ‘welcomed’ in the Edinburgh sanitarium rather harshly by Chief Medical Officer (Julian Sands, "A Room with a View"), but his psychiatrist, Dr. Rivers (Ben Daniels, "Rogue One: A Star Wars Story"), is another matter entirely, subtly signaling Sassoon is not the only homosexual in his office.  In a small role Daniels is noteworthy, his eyes beaming compassion, his manner comfort.  It is Rivers who introduces his patient to another, Wilfred Owen (Matthew Tennyson, "Pride"), an aspiring poet who not only becomes Sassoon’s protégé, but whom Sassoon believed surpassed his own work (Owen would return to the front, losing his life a mere week before war’s end).

The film’s sprawling midsection charts Sassoon’s love affairs with such luminaries as Ivor Novello (Jeremy Irvine, "War Horse"), Glen Byam Shaw (Tom Blyth, HBO's 'The Gilded Age') and Stephen Tennant (Calam Lynch, "Dunkirk") before following in Glen’s footsteps by marrying.  Hester Gatty (Kate Phillips, "Downton Abbey") noticed Siegfried before he ever noticed her, but their courtship, at least as related here, appeared rooted in genuine friendship.  So, it is quite alarming to jump forward some twenty-odd years to find a mean-spirited, cold older man and a cowed wife (Gemma Jones, HBO's 'Gentlemen Jack'), now parents to the adult George (Richard Goulding, "Me Before You").   Davies obviously finds Sassoon’s conversion to the Roman Catholic faith a pivotal milestone, but by omitting the prior thirty years, its significance is a mystery.  The arrival of an older Stephen Tennant (Anton Lesser, "Disobedience") in the third act also indicates a much deeper heartbreak in the broken relationship than is indicated at the time.

The production is handsome, the cast, which includes Geraldine James as Sassoon’s mother and Simon Russell Beale as Robbie Ross, sprawling.  “Benediction” is an engrossing portrait of an artist and his circle which stalls in the man’s youth, never really crossing the finish line.

Siegfried Sassoon (Jack Lowden) was a decorated hero during the Great War, but the loss of his brother in battle turned the poet into an adamant anti-war activist. His militancy against the war and the government and the poetry it inspired made him the favorite of the aristocracy and London’s literary influencers in “Benediction.”

It has been quite a while since I have seen a film by Terence Davies and I knew nothing about Siegfried Sassoon, so I killed two birds with one stone by seeing “Benediction.” The first thing I noticed about this period piece is its stunning look and crisp photography used in telling Sassoon’s life story.
It is 1914 and the world is on the brink of total war. But, no one knew what was to come and the mood was one of confidence and joy. Siegfried and his brother Hamo (Thom Ashley) head to their tailor to get decked out in their new uniforms. War is just another adventure to have.

Sassoon loses his beloved younger brother to the war and, combined with the horrors he has personally witnessed turns the once–enthusiastic warrior into a vocal antiwar activist. This is not tolerated by his higher ups and he is transferred to an asylum to treat his “condition.” This is where Siegfried begins his life of pursuit of peace of mind.

The film begins with Sassoon’s life told in a linear fashion as the young man’s life unfolds. Then, it begins its jumps back and forth between young Siegfried and his older, more bitter self played by Peter Capaldi. It is almost like Sassoon is actually two different people – one is the young adventurer-poet with a lust for life while the other is an old, embittered and somewhat selfish man. I like young Siegfried better.

The production of “Benediction” is lavish, using the period to show the transition from the Victorian Era to the 20th century – from the quaint and lyrical to the modern and fast-paced. Sassoon’s often turbulent explorations into gay life and straight marriage make for an interesting telling of a life I did not know.