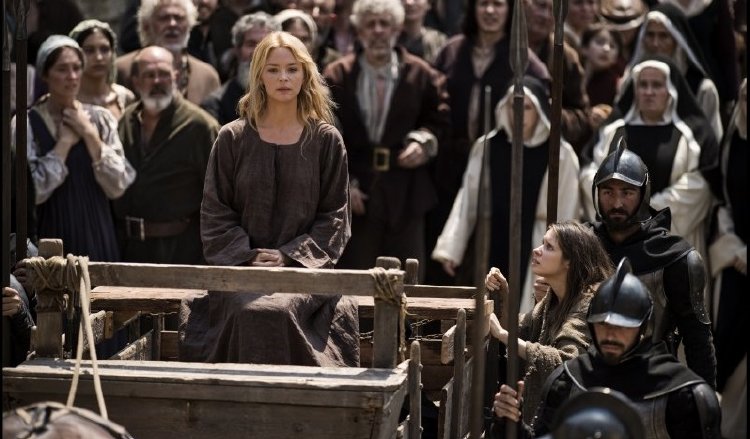 In 17th century Italy, Giuliano Carlini (David Clavel) is surprised by the hard bargain driven by Theatine Abbess, Sister Felicita (Charlotte Rampling), in allowing his young daughter to enter the convent.  The little girl herself is dismayed when a carved statue of the Virgin Mary gifted to her by her mother is taken away and her blue silk dress is replaced with a scratchy, woolen garment.  But when she sneaks out at night to pray to the convent’s life size Virgin Mary statue, it suddenly teeters forward, pinning her to the ground.  The nuns who gather begin whispering miracle as the Abbess rushes them back to bed, already considering her new charge, “Benedetta.”

When a Dutch screenwriter brought Judith C. Brown's ‘Immodest Acts: The Life of a Lesbian Nun in Renaissance Italy’ to cowriter (with "Elle's" David Birke)/director Paul Verhoeven, they apparently clashed over sexuality developing the project, so it is no surprise that while Verhoeven examines hypocrisy and corruption within the Church, the “Showgirls” director has also played up the more lurid aspects of this story.  Call it “Stigmata-girls.”

There’s also quite a bit of humor at play, as evidenced by the nun who takes Benedetta’s statue away (it will return later, repurposed into the now infamous dildo).  Showing the little girl the wooden appendage which replaced a lost forefinger, the nun states that she wishes every one of her appendages could be replaced with wood.  Flash forward to the now stunning Benedetta (Virginie Efira, "Elle") celebrating her final vows, her father providing the feast.  Soon thereafter, a peasant woman, Bartolomea (Daphné Patakia), bursts into the convent’s courtyard desperate for protection from her sexually abusive father.  The Abbess informs the terrified woman that the convent is not a charity – ‘you must pay to stay here.’  Benedetta intercedes, her father ‘gifting’ her Bartolomea’s novitiate dowry.  The randy young woman is soon noisily excreting in the privy, displaying her nudity in a shower and daring Benedetta to do the same.  Her first explicit sexual touch will surprise Benedetta during prayers, sending the nun into a religious vision of her husband Jesus.

The film is basically a tug of war among Benedetta, who may or may not believe her own visions and stigmata; Bartolomea, who is only pursuing earthly pleasures; Christina (Louise Chevillotte, "Synonyms"), the daughter of the Abbess who condemns Benedetta as a fraud and her mother, who sees the advantages of playing along with Benedetta, especially when challenged by the local priest.  The only true innocent is Bartolomea, who is punished severely by Benedetta for her first transgression (before Benedetta’s vision of Jesus gives her permission to feel no shame), then faces ‘the pear of anguish,’ a horrific torture device, when the Nuncio, Alfonso Giglioli (Lambert Wilson, "Of Gods and Men"), arrives to put Benedetta on trial, the religious patriarchy as up for the sight of nude, writhing female bodies as Verhoeven himself.

That the Nuncio defies Benedetta’s orders to seal the town’s gates due to the plague and that the Abbess publicly condemns her own daughter (who lies as a means to an end, but is, in fact, correct) not only evinces the political maneuverings within the Church but is an uncanny reflection of today’s pandemic and flirtations with the truth.  Efira is very effective keeping us off balance, Verhoeven’s equating of orgasm with religious ecstasy suggesting that she believes what is convenient for her to believe.  But while the film is, indeed, based on fact, the filmmaker’s revelry in blasphemy (something Benedetta, too, uses to her advantage, accusing in the guttural voice of one possessed) and lurid, soft core porn suggests he is more interested in titillation than condemning hypocrisy.     Verhoeven illustrates a woman’s achievement of power in the patriarchic 17th century, then exploits her sexuality.  “Benedetta” lacks the artistry of “The Devils,” instead history by way of camp excess.

In the 17th century, a young woman is brought to a convent in remote Pescia, Italy by her father and, after haggling over her dowry to the Church, he leaves his daughter in the care of the sister superior. But, there is devilry afoot and it will rear its ugly head for “Benedetta.”

This was a last minute selection to watch for our show so I pretty much knew nothing about this latest tome by Paul Verhoeven. As I watched this lurid tale of lust during the time of the Inquisition play out, I realized I was watching both old, and not so old, Verhoeven.

For the old, I think “Soldier of Orange (1977)” fits the bill for historic, period drama, which “Benedetta” also is. For the not-so-old, “Show Girls (1995)” hits the mark for the lurid, appealing-to-prurient-interests that his latest does in spades. Verhoeven combines the historic and lurid in a package that is just a little (I am holding my thumb and index finger really close) this side of pornography. And, yes, it is aimed to titillate those prurient interests.

For a brief synopsis, Benedetta enters the convent to do God’s work. She meets another young novice, Bartolomea, and, almost immediately, a torrid, secret affair ensues. There are purported miracles attributed to Benedetta and the local priest soon promotes her to Mother Superior, replacing the convent founder, the abbess, Sister Felicita (Charlotte Rampling). The newly-minted sister superior uses her position to expand her lustful relationship with Bartolemea, which may be her downfall. You have to see for yourself.
So, if you want your prurient interests aroused at the same time that you feel religious guilt for those interests, then “Benedetta” will take care of both for you.